China is the second largest pharmaceutical market in the world 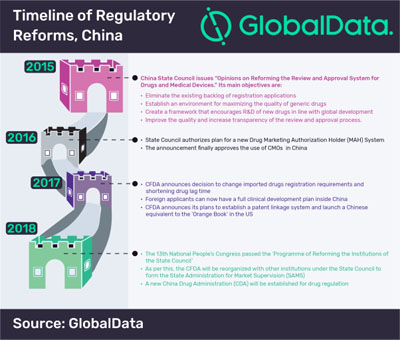 Driven by a large population, increasing incidence of chronic diseases and growing investments in healthcare sector, the Chinese pharmaceutical market is forecast to grow at a compound annual growth rate of 30% from $123.7 billion in 2016 to $573.5 billion in 2022.

However, certain barriers such as drug approval delays and a lack of patent linkage rules are a concern for foreign companies operating in the country, says leading data and analytics company GlobalData.

In August 2015, the China State Council issued the “Opinions on Reforming the Review and Approval System for Drugs and Medical Devices.” The council introduced further reforms in 2016 and 2017.

The intention was to “promote the structural adjustment, transformation and upgrade of the pharmaceutical industry and bring marketed products up to international standards in terms of efficacy, safety and quality, so as to better meet the public needs for drugs.”

In 2015, there were only around 70 reviewers to handle an annual load of more than 7000 drug applications in the Center for Drug Evaluation. By the end of 2016, about 600 drug reviewers had been hired with a further 223 new employees added in 2017.

Vikas Bedi, APAC Healthcare Research Director at GlobalData, says: “The increased staff at the China Food and Drug Administration (CFDA) will strengthen the standards for generic drugs approval process, clinical trial review process and the priority review process for innovative drugs. CFDA’s goal is to lower the time for new drug applications from 5 years to around 6 months by the end of 2018 without any backlog.”

Between July 2015 and July 2016, it was reported that around 90% of the 1622 applications had been withdrawn by applicants or rejected by the CFDA owing to the submission of inauthentic or incomplete clinical data.

Compared with 2016, almost double IND applications were approved in 2017 (91 versus 170). The recently enacted priority review system resulted in 50 drugs receiving accelerated entry to the Chinese market in 2017.

Among these were AbbVie’s Humira, Incyte’s Jakafi, BI’s Gilotrif and Celgene’s Vidaza. In terms of co-operativity with drug developers, the CFDA accepted 38% of meeting requests in 2017, which amounted to 321 meetings held, more than double the 118 that were held in 2016.

“Earlier, drugs could be tested in China only if they were approved or had gone through late stage studies in some other country. The cancellation of this requirement allows Chinese sites to be part of multicentre studies. This will also shorten the foreign drug registration process as drugs approved in other countries no longer need to request a clinical trial waiver from the CFDA.”

As some of the reforms are still in the implementation stage, their impact is yet to be measured.

Bedi concludes: “It is expected that reforms like those in the clinical trial processes along with the recent permit to CMOs will help in attracting foreign investment. Further, with the introduction of the patent linkage system, the CFDA hopes to address the existing patent issues and minimise patent infringement cases.”

Eli Lilly’s acquisition of Loxo Oncology will result in quick return of investment
BMS' acquisition of Celgene could position the company amongst top five most profitable pharma giants
Drug pricing and reimbursement concerns will remain the leading impediment to industry growth in 2019
R&D returns fall to lowest level in 9 years, says Deloitte and GlobalData
Drug development in neuroimmunology to witness strong growth in the 8MM
Immuno-oncology drug development and personalised medicine will continue to reshape the pharma industry in 2019
Big Data and AI to transform healthcare by driving innovation, growing revenues and increasing operational efficiencies
GSK and Pfizer deal shows shift in strategy shift to create the leader in over-the-counter products
Bayer receives European approval for haemophilia drug Jivi ... but has stiff competition ahead
Global atopic dermatitis market set to reach $18.3 billion by 2027
Pfizer’s palbociclib is the top breast cancer drug used in clinical trials initiated in 2018
Pharma companies may miss crucial EU drug packaging deadline with a no-deal Brexit
Global chronic lymphocytic leukemia market set to reach $9.2bn by 2027
Commercial prospects for immuno-oncology development across oncology indications in untapped cancer types or in combinations
Non-small cell lung cancer market projected to be worth $14.6 billion by 2024