Enzymicals has developed a new simple and robust way to manufacture enantiopure Rimantadine. For this process, Transaminases from the internal portfolio of the company are used.

Although isomers of chiral drugs have the same chemical structure, they can exhibit marked differences in biological activities such as pharmacology, toxicology, pharmacokinetics, metabolism etc. Therefore the exact knowledge about the pharmacological effects of enantiopure ingredients is of large importance and the production of enantiomerically pure substances is often required.

(R,S)-1-(1-adamantyl)ethanamine 1 is well-known as Rimantadine, an established API with antiviral activity against influenza A virus and it is used also for symptomatic treatment of Parkinson’s disease. At present, the racemic mixture is used in the approved drugs.

Recently the different effect of (R)- and (S)-Rimantadine on the M2 proton channel from invluenza A virus was investigated and it could be shown that (R)-Rimantadine is the more effective drug substance.1, 2

Beside the pharmaceutical application the enantiopure (R)- and (S)-1-(1-adamantyl)ethanamine could be interesting building blocks for organic synthesis to manufacture chiral compounds. 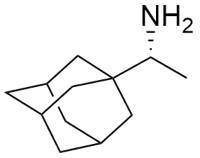 Based on these findings a robust and easy production strategy of the enantiopure building block is necessary. Until now, the pure enantiomers were obtained by crystallisation of the salts of the diastereomers with optical pure acids2. An enantioselective multistep synthesis was developed to prepare the deuterium-labeled Rimantadine1. Several chromatographic separation methods of the two enantiomers are described for the analytical scale.

A much more comfortable way to enantiopure Rimantadine is the use of Amine Transaminases (ATA) for a kinetic resolution of the corresponding racemic compound.

Using an (S)-selective ATA we were able to synthesise the corresponding (R)-1-(1-adamantyl)ethanamine (R)-2 starting from the racemic mixture.

In Enzymicals' Transaminase portfolio (ECS-ATAs) an (S)-selective ATA was identified to selectively convert the (S)-enantiomer and an (R)-selective ATA to selectively convert the (R)-enantiomer as well. Using these catalysts we are able to produce both enantiomers with an ee > 99,5%. The remaining ketone 3 can be easily separated and returned in to the process as starting material. The process was up scaled in to gram scale and samples are available on request. The (R)- and (S)-1-(1-adamantyl)ethanamine will be incorporated into the Enzymicals catalogue with the next update.

Currently the team works on the asymmetric synthesis to the enantiopure Rimantadine directly from the ketone 3.