New fieldbus options provide drives’ users with fast, accurate control of processes as well as access to large amounts of data on how the process is behaving

Some of the latest variable-speed drives from ABB offer two option slots for fieldbus modules. These modules can be of different types, allowing, for example, a PROFIBUS module and an Ethernet module to be run at the same time. This allows the user to control a process with the most appropriate protocol while gathering data from the production process by another completely separate route.

For instance, the PROFIBUS module is best placed when a high degree of predictability is needed such that all drives respond at the same time and in the same way. Here the command and control fieldbus operates quickly and in a synchronised way. Meanwhile, the Ethernet module can be used to gather production data, such as statistics on how the system is behaving.

This dual system also allows for a more robust system design. If control data and production data all went via one network, the production data could slow the control system down, making it unresponsive, or the mass of data being collected could interrupt communication. 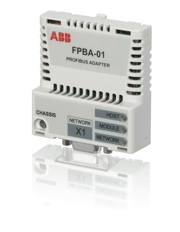 New fieldbus options fast, accurate control of processes as well as access to large amounts of data on how the process is behaving

Users can connect the drives to any industrial network by installing an option module. As well as the ability to use PROFIBUS-DP, the most widely used industrial fieldbus, ABB’s latest drives can connect to Modbus, CanOpen, DeviceNet, EtherCat and PowerLink. Future plans will also see the drive able to operate with LonWorks and ControlNet.

Also offered is access to Ethernet. These networks are cheaper to install and are traditionally present in a factory to provide IT support. ABB’s drives can now be connected onto the same networks, allowing them to be viewed on the web or only within the office. Any of the drive parameters can be passed across either of the two networks.

A two-port module makes Ethernet networks quick and easy to build, as the cable can be looped in then out as a daisy chain. This removes the need for an Ethernet switch to connect the drives onto the network. The two-port device also maintains communications when the drive is off.

Previously, Ethernet was not used for control, as synchronised, time stamped operation was not possible. This meant users could not be sure when the drive would start. New protocols now allow users to take advantage of Ethernet speeds, but with synchronised, predictable operation, bringing the possibility of true control of devices over Ethernet instead of simply monitoring their behaviour.

Another option is the ability to use PROFIsafe. The safe version of the fieldbus system PROFIBUS, it allows safety signals to be sent via fieldbus instead of a hard-wired system, which can be expensive. The ABB AC500 PLC has safety I/O and PROFIsafe, so the addition of PROFIsafe to the latest ABB drives allows a complete system to be designed and built.