The interest in biologic drugs has increased in recent years as more doctors and patients have come to realise their ability to treat diseases that have not been addressed with small-molecule drugs. As a result, the biopharmaceutical market, while still only a small part of the global drug market, is growing faster than the small-molecule segment.

That growth has been attracting rising numbers of drug manufacturers, including traditional Big Pharma companies, to develop treatments based on biologics. More companies are also outsourcing to contract research organisations (CROs) and contract manufacturing organisations (CMOs) that offer support for the development, testing and manufacture of biopharmaceuticals. CROs and CMOs looking to attract this new business should be careful, however, not to use one single strategy when courting these different types of sponsors.

The strong demand for biologics can be attributed to a number of factors, but perhaps the most significant are global ageing and the increase in chronic diseases, such as diabetes, heart diseases and arthritis, for which small-molecule drugs are generally less effective. Improving economic conditions in emerging markets are also enabling entire new groups of people in these regions to afford more expensive biologic treatments.1

The global biopharmaceutical market in 2014 was valued at US$163bn and accounted for 20% of the total pharma market, according to McKinsey & Company. The firm also reported that the 8% growth in demand for biologic drugs is twice that for small-molecule therapies and expected to continue for several years. In addition, each of the top 15 biopharmaceutical drugs on the market have global sales in excess of $2bn, and some much higher than that (e.g. Humira at >$10bn). Given these numbers, it is not surprising that many conventional pharmaceutical companies have initiated R&D efforts focused on the development of biologic drugs.2

Both biotech and pharmaceutical companies are facing increasing downward pressures on costs from both governments and payers, who are demanding demonstrated value for the pharmacy expenditures

At the same time, however, both biotech and pharmaceutical companies are facing increasing downward pressures on costs from both governments and payers, who are demanding demonstrated value for the pharmacy expenditures. As a result, biopharma manufacturers, including big and emerging biotech companies and big, speciality/medium and niche/emerging pharmaceutical companies are all turning more frequently to CROs, CMOs and contract development and manufacturing organisations (CDMOs) for assistance with the development, testing and manufacture of new biopharmaceuticals.

A main driver is the ability to save money, particularly by avoiding the high capital expenditures and long lead times associated with the construction, equipment and validation required for new manufacturing facilities. It should also be noted, however, that as the complexity of biologic drugs increases, many sponsors are turning to service providers with the specialised expertise needed for such projects.

The global CRO and CMO markets are growing at healthy rates of 9% and 6.4% CAGR respectively.3 One of the main drivers of this growth in the CRO space is increased demand for services related to biologic API/drug development, according to market research firm TechNavio.3 The CMO market, according to Mordor Intelligence, is predicted to be worth $84bn in 2020, up from $58bn in 20144, with services supporting formulation production growing at a faster pace than those related to API manufacturing, although this still accounts for the largest share of the business.

As the complexity of biologic drugs increases, many sponsors are turning to service providers with the specialised expertise needed for such projects

The trends noted in these market research reports agree well with the results obtained for Nice Insight’s annual Pharmaceutical and Biotechnology Outsourcing survey of more than 2,300 outsourcing-facing pharma and biotech executives.5 Responses to the 2015 survey reflect the growing importance of bio-pharmaceuticals to the overall drug industry. For instance, the percentage of survey participants whose companies are engaged in the development of biologics has increased from 65% in 2013 to 82% in 2015. In addition, the percentage of outsourcing budgets spent on biologics vs small-molecule therapeutics has risen from 54% to 58% over the same period.

Furthermore, the survey indicates changes in spending on CRO/CMO services that also reflect the market growth observed in the CRO/CMO space. Specifically, the proportion of respondents whose companies spend $10-50m on outsourcing has increased dramatically from 38% to 62%, while the percentage of participants whose companies spend less than $10m has decreased by slightly more than half. In addition, regardless of the buyer group or budget size, the average number of different services outsourced by survey participant companies increased from 2014 to 2015.

While both big and emerging biotech companies are focused on developing biopharmaceuticals, there are notable differences in their preferences when it comes to CROs and CMOs. Service providers that use a one-size-fits-all strategy for marketing to biologics manufacturers may be missing out on significant opportunities. In fact, the results of the 2015 Nice Insight Pharmaceutical and Biotechnology Outsourcing survey suggest that emerging biotech companies may, in fact, be looking for very different sorts of CRO/CMO partners from their big biotech counterparts.

First, there are differences with respect to the therapeutic areas on which they place more or less focus. According to the survey results, big biotech firms emphasise infectious diseases, cardio-vascular diseases, metabolic disorders and endocrine diseases in that order. Emerging biotech firms, on the other hand, focus on cardiovascular diseases, followed by infectious and endocrine diseases and metabolic disorders. 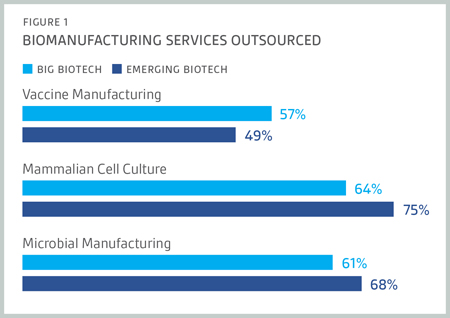 Emerging and big biotech companies also tend to outsource different services to different degrees. Respondents to the 2015 Nice Insight survey who work at big biotech firms indicated that in the next 12–18 months their companies are most likely to outsource biomanufacturing, biostatistics, analytical, clinical research and clinical monitoring services.

But while participants at emerging biotech companies indicated that they too would be outsourcing many of these services, more types of services received higher responses and those expected to be used most often were in a slightly different order: biostatistics; biomanufacturing; analytical; clinical research; blending; chemical synthesis; packaging; and clinical monitoring. 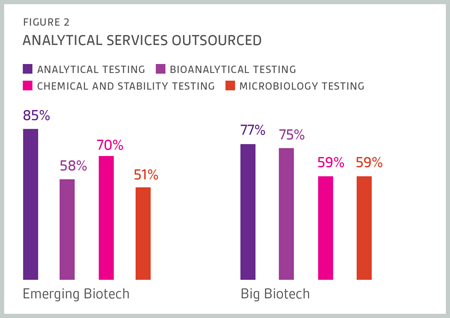 While there are differences in the outsourcing behaviours of big biotech and emerging biopharmaceutical companies, it is important to recognise that there are also some key similarities

While there are differences in the outsourcing behaviours of big biotech and emerging biopharmaceutical companies, it is important to recognise that there are also some key similarities between the two types of biologics manufacturers, particularly with regard to CRO/CMO selection criteria and metrics for performance evaluation.

Respondents from both types of biologics producers indicated that a strong track record of success is a key factor when selecting their outsourcing partners, as are good communication and transparency and having an under-standing of the customer’s requirements and an industry reputation for doing quality work.

In addition, the same three traits – poor product quality, a lack of timeliness when resolving issues and unexpected charges – were listed by survey participants that work for both large biotechs and emerging biologics producers. They also use similar metrics when evaluating the performance of CROs and CMOs, with the top four including quality, cost-effectiveness, performance on safety/compliance audits and on-time delivery.

Clearly, to be successful, CROs and CMOs serving biopharmaceutical manufacturers, regardless of type, must have a demonstrated history of providing high quality, products and services at reasonable prices. For those CROs and CMOs that wish to target either big biotech sponsors or emerging biologics producers, it could be very beneficial to consider the therapeutic areas they are likely to focus on, the phases at which they are most likely to outsource projects, and the types of outsourcing projects they are likely to need.