Targeting the angiogenesis process has been shown to have an effect in arresting tumour growth, with several growth factors being potential targets

Targeting the angiogenesis process has been shown to have an effect in arresting tumour growth, with several growth factors being potential targets. One such drug is in development at Abbott. Linifanib is a dual inhibitor of vascular endothelial growth factor and platelet-derived growth factor receptor tyrosine kinases, and is being investigated in several different cancers.1 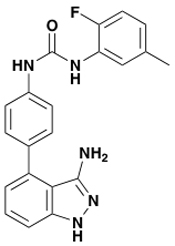 Results of several clinical trials were presented at this year’s American Society of Clinical Oncology meeting. In one open label trial, 44 patients with unresectable or metastatic hepatocellular carcinoma were given 0.25mg/kg of the drug either once a day or every other day.2

The most common drug-related adverse events were fatigue and diarrhoea, and about a third of patients required dose reductions because of the adverse events. After two years, four of the patients remained on the study, 27 discontinued because of disease progression, and a further eight because of adverse events. They concluded that it is clinically active in this cancer with an acceptable safety profile, and a Phase III study versus sorafenib is underway.

It is also being investigated in renal cell carcinoma. In an open label trial, 53 patients who had failed sunitinib therapy were given once-daily doses of 0.25mg/kg. The most common adverse events were diarrhoea, fatigue, hyper-tension and nausea; 46 patients had adverse event-related dose interruptions, and 36 dose reductions.3 After two years, 37 had discontinued because of disease progression, eight for adverse events, and two for other reasons. Future trials as monotherapy will use a fixed starting dose of 17.5mg/day.

In another open label trial, 139 patients with advanced or metastatic non-small cell lung cancer who had failed prior systemic therapy were randomised to receive either 0.10 or 0.25mg/kg daily until disease progression or intolerable toxicity.4 Common adverse events included hyper-tension, fatigue and proteinurea, which were lower in those given the 0.10mg/kg dose. About a quarter of patients needed dose reductions because of adverse events, mostly in the higher dose group. After 27 months, seven patients remained on the study; 107 had disease progression, 17 because of other adverse events and eight for other reasons. They concluded that it was active in non-small cell lung cancer patients. Trials continue.