Biocatalytic access to a novel class of Mannich catalysts 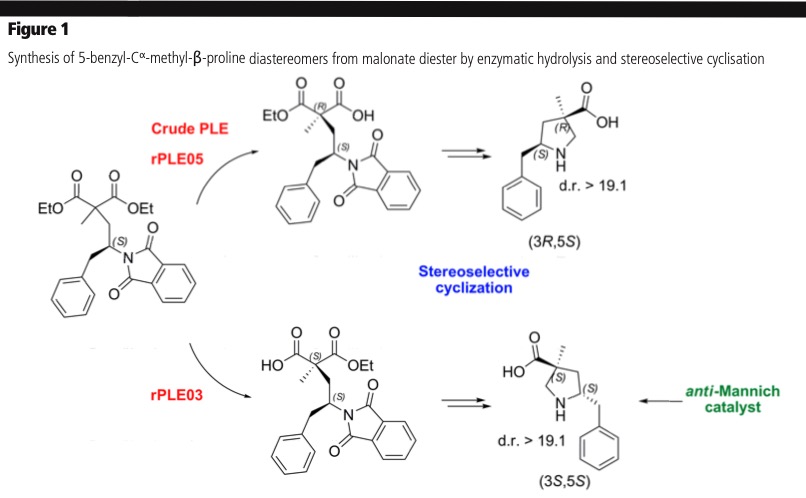 The application of recombinant pig liver esterase isoenzymes was key to successfully obtaining the (3S,5S)-diastereomer, which shows activity as an anti-Mannich catalyst. The asymmetric Mannich reaction is an important carbon-carbon bond-forming step in the synthesis of chiral molecules containing nitrogen. The resulting β-amino carbonyl compounds act as valuable synthons in the preparation of many natural products with useful biological properties. Consequently, the demand for Mannich reactions that selectively deliver anti- or syn-products with high enantioselectivity is high.

Among the variety of available organocatalysts, proline is one of the most commonly used and provides easy access to syn-products in Mannich type reactions. Enantioselective anti-Mannich reactions catalysed by pyrrolidine derivatives are, however, considerably rare. Furthermore, as the industrial use of proline-organocatalysts is limited — because of high catalyst loadings — there is a growing demand for more efficient proline analogues.

Following asymmetric ester hydrolysis by diverse rPLE isoenzymes, the selectivity and the resulting diastereomeric ratio (dr) of the enzymatic hydrolysis reaction depends on the structure of the substituent and works best with a phthalimide group.

The enantiomerically enriched chiral half ester derived from PLE isoenzyme hydrolysis was transformed into a novel g-lactam by stereoselective cyclisation and, subsequently, converted into (3R,5S)- and (3S,5S)-Ca-methyl-b-proline, respectively. Both diastereomers of the 5-benzyl-Ca-methyl-b-proline analogue were tested for catalytic activity in the Mannich reaction between a-imino ester and isovaleraldehyde (Figure 2).

The (3R,5S)-b-proline analogue appeared to catalyse the Mannich reaction between an a-imino ester and an aldehyde, providing the anti-product with decent to good diastereoselectivities (dr 19:1); but, the enantioselectivities in the reaction were insufficient (32% enantiomeric excess [ee]).

The second diastereomer of the 5-benzyl substituted Ca-methyl-b-proline (3S,5S) proved to be an efficient catalyst, providing anti-products in a dr of 23:1 and ee of up to 99%.

This study demonstrates that biocatalytic integration facilitates the development of new synthesis routes and provides access to novel compounds. With appropriate and ready-to-screen enzyme panels, basic feasibility studies can be done quickly and reliable conclusions drawn. Even in the absence of strict enzyme selectivities — in their wild type state — synthetic chemists will be able to use enriched intermediates more efficiently for further processing steps to rapidly obtain the required molecules.

The in-depth optimisation of individual process steps or, indeed, engineering the catalysts at a molecular level can still be done to further increase the efficiency of the synthesis at a later stage of development. We are convinced that the combination of biocatalysis with other stereoselective techniques will deliver a competitive advantage in terms of research, development and production.