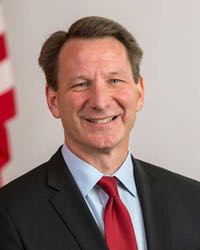 As Scott Gottlieb comes to the end of his time as FDA Commissioner, the Trump administration has announced his replacement. Dr Norman “Ned” Sharpless has been chosen to fill the departing Gottlieb’s shoes, though only in an Acting Commissioner capacity. Whether he will remain long-term is still uncertain.

Even prior to his appointment, Sharpless was interested in the running of the country’s FDA, working with Gottlieb in his capacity as National Cancer Institute (NCI) Director.

When the departing commissioner announced his resignation, Sharpless took to Twitter to say how much he would miss working with him, citing his bold leadership with regard to tobacco, generics, novel biologics and so much more.

Sharpless also appears to have the support of Gottlieb, calling him a “friend to the FDA” in a tweet congratulating him.

The Department of Health and Human Services announced Sharpless’ selection on 12 March. Health secretary Alex Azar confirmed the appointment at a hearing before the House Energy and Commerce health subcommittee.

Azar said: “There will be no let-up in the agency’s focus, from ongoing efforts on drug approvals and combating the opioid crisis to modernising food safety and addressing the rapid rise in youth use of e-cigarettes.”

Sharpless’ convictions against e-cigarettes is reinforced by his time at the NCI, serving the role of Director since 2017. During his time at the institute, he regularly tweeted about the rising problem of these tobacco products in children. Douglas Lowy will serve as Acting Director of the NCI after Sharpless’ departure.

His personal experience in the drug industry combined with priorities that run parallel to his predecessor should help calm the panic from Gottlieb’s sudden departure, and is expected by many to bring stability back to the industry.