Ellutia is the first occupier within the Enterprise Zone at the business park. The official opening was attended by Mark Garnier, Minister in the Department for International Trade and Lucy Frazer, MP for South East Cambridgeshire.

The new premises covers 15,000sqft and will give Ellutia the room for its planned growth, with an expected increase in staff levels by 40% over the next two years.

Mark Garnier said: “Ellutia are the embodiment of Cambridge’s enterprising spirit, with ambitious plans to increase their exports and break into new markets.” 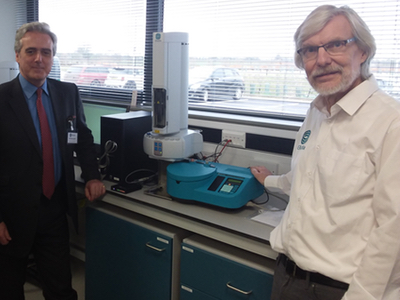 Philip James, Managing Director at Ellutia commented, “A key consideration for us when choosing this location was our staff. By being based outside the city of Cambridge, our employees enjoy the travel benefits and lower cost of living Ely offers. But we are still in close proximity to Cambridge and London, where much scientific innovation takes place with the help of our instruments.”

Lucy Frazer, MP for South East Cambridgeshire, said: “It was superb to visit Ellutia in its new premises. Ellutia is a growing business operating in a significant market and it was interesting to hear about their current exports and plans for growth.”