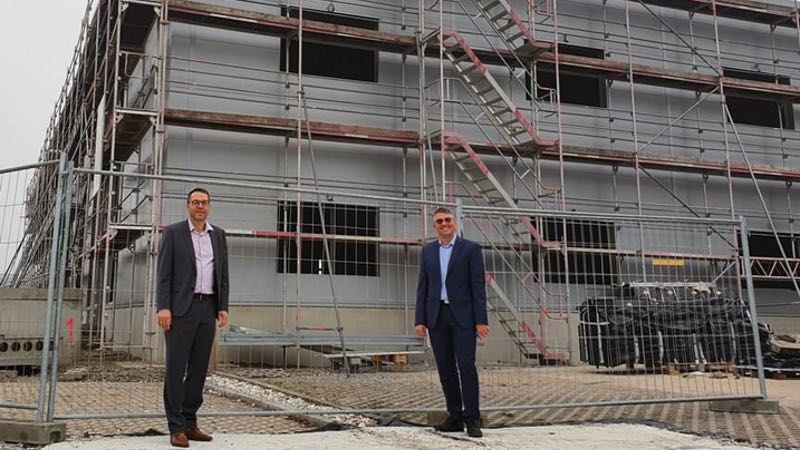 Gerresheimer Regensburg is increasing the capacity of its Small Batch Production in the Technical Competence Center (TCC) Wackersdorf.

To this purpose, already existing production area has been converted into cleanroom space, and a new building with additional cleanroom and office space has been completed.

Gerresheimer had already invested a double-digit sum in the millions in the expansion of small batch production in Wackersdorf in 2018. In the context of the plastic and glass competence of the company, 900 sqm of additional area was at that time created for the development and industrialisation of glass products like syringes and carpules.

A double-digit sum in the millions is once again being invested to adapt the capacity of small batch production in the plastics segment to the growing number of projects. Produced here are, for example, patch pumps for administering medication, drug containers for injection without needles, point-of-care tests, infusion sets for X-ray contrast agents, syringes, and much more.

Existing production space was converted into a 500 sqm cleanroom of the ISO-14644-1 classes 8 and 7. This cleanroom is already in operation.

In a second step, an extension building is now being built, which, in addition to 245 sqm of office space, also provides 1,200 sqm of additional cleanroom area. Up to now, small batch production had a total of 1,800 sqm of production area for the plastics segment in the ISO classes 7 and 8, as well as rooms of the GMP classes C and D for pharmaceutical glass production.

Following the conversion, with 2,200 sqm, more than double the cleanroom area of ISO classes 7 and 8 are available for plastic production. The total production area of small batch production now amounts to 2,900 square meters.

Through the manufacture of medical devices, such as, for example, patch pumps with internally developed micro pumps, in small batch production, Gerresheimer Regensburg opens up a new business area as an Original Equipment Manufacturer (OEM).

The classification of the company in the commercial register is therefore being supplemented by the point "Manufacture of medical and dental apparatuses and materials."

The expansion of production capacity in small batch production is required due to the growing number of development projects for pharmaceutical and medical technology products.

Prior to batch production, these products are subjected to a protracted development and approval process, for which small numbers of units are often required as samples. Small batch production thereby ensures the required product quality, as well as complete batch documentation at the level of subsequent large batch production.

The experiences can also be transferred directly to subsequent production on a large scale when establishing large batch production.