Four companies honoured for International Trade and two for Innovation

Six companies in the pharmaceutical industry have been honoured in this year's Queen’s Awards for Enterprise. Four out of the six were acknowledged for their success in International Trade. The other two won awards for Innovation.

In International Trade, Johnson & Johnson Professional Export, a division of Johnson & Johnson Medical, based at Kirkton Campus, Livingston, Scotland, was recognised for its successful domestic and international strategies which have widened access to its range of medical devices and diagnostic products in emerging markets including Iran, Malta/Gibraltar and Sub-Saharan Africa.

PrimeVigilance, a specialist pharmacovigilance service provider, was also honoured in this category in recognition of achieving substantial overseas earnings of 173% over the last three years. The company also entered a number of new markets in this period including Australia, Germany, Spain, Switzerland and Scandinavian countries.

'PrimeVigilance has grown substantially since it was founded six years ago and this award is testament to the high quality service we provide to our customers around the world,' said Neil Clark, Chief Executive of the Guildford, Surrey-based company.

Vernalis' Research Group, located at Granta Park, Cambridge, provides drug discovery expertise to pharmaceutical companies to develop novel treatments for unmet medical needs. Its scientists are specialists in fragment and structure based drug discovery and have built a reputation for innovation and delivery. This expertise has been a key factor in securing strategic collaborations with non-UK pharmaceutical companies, resulting in significant growth in overseas revenues and earnings. Recent collaborators include Asahi Kasei Pharmaceuticals, Genentech, GSK, Lundbeck and Servier.

Ian Garland, Chief Executive, said: 'Vernalis is absolutely delighted with this award which is a strong endorsement of both the talent and capabilities of our research group and recognition of the significant achievement in growing overseas earnings in recent years.'

Ezi-Dock Systems, a global supplier of industrial packaging and high containment transfer systems for pharmaceutical and chemical products, was launched 2003 to design, develop and deliver effective and easy-to-use high-end industrial packaging products. In the past 10 years the company has grown into a multi-million turnover international business which exports in excess of 80% of its products to most European countries, Japan, the US, South and Central America, China and Korea; for this it took an International Trade award.

'There is no magic key,' said Sales Director Mike Brimson. 'We have worked in these environments for many years and we know where the problems lie. Ezi-Dock has succeeded because we have been able to develop specific solutions for specific problems, and offer very worthwhile cost advantages.'

We have been able to develop specific solutions for specific problems, and offer very worthwhile cost advantages

In the Innovation category, Renishaw, a global engineering technologies company, was honoured for its inVia Raman microscope, which enables the rapid generation of high definition 2D and 3D chemical images for material analysis. This is the company's 17th Queen's Award since its formation in 1973 and its 8th in 11 years.

Sir David McMurtry, Renishaw's Chairman and Chief Executive, said: 'Although we have won many Queen's Awards, this is very special as it is the first to recognise our achievements outside the field of industrial metrology.' 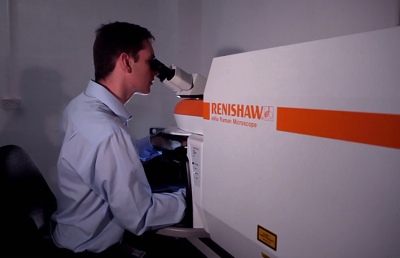 Renishaw's inVia microscopes use a form of light scattering (Raman scattering) to analyse the chemical structure and composition of materials. It is of major benefit to academics and industrialists who use inVia to tackle analytical problems across a broad range of application areas, including: pharmaceuticals; chemicals; materials science; semiconductors; forensics; and green energy development, such as photovoltaics.

inVia's StreamLine technology enables users to generate chemical images rapidly and it has opened up new research opportunities in many fields, including biology and nanotechnology. StreamLine scans the sample with a line of laser light, collecting data from multiple points simultaneously. This prevents sample damage and gives shorter analysis times. StreamLine is made possible by a Renishaw-developed motorised sample stage, which provides fast, accurate motion, and enables the imaging of both small and large areas.

Softbox Systems added an Innovation award to the one for International Trade that it won in 2011.

The company took the award for its Silverpod air cargo temperature control systems for shipping pharmaceuticals. Silverpods are a new way of looking at how best to optimise the use of cargo space within wide-bodied aircraft to reduce shipping costs and CO2 emissions while ensuring maximum efficacy of pharmaceuticals.

Mark Hammond, Softbox Systems Sales Director, said: 'Since their introduction in 2008, Silverpods have formed a key part of our solution offering and are now used by more than half the world's top 50 pharmaceutical companies and their 3PL's to transport temperature-sensitive finished drugs around the world.'

The Queen’s Awards for Enterprise are the UK’s most prestigious business awards, given only to companies or individuals who are outstanding in their field. Previously known as the Queen’s Awards to Industry, the first Awards were given in 1966.

This year, 162 business awards were given: 110 for International Trade, 39 for Innovation and 13 for Sustainable Development.