Rising prosperity is driving an expansion of the healthcare infrastructure in Turkey, allowing manufacturers to move away from traditional generics and into contract manufacturing and R&D as well as export markets

With rising economic prosperity, an ageing population and strong government incentives, the Turkish pharmaceutical industry is looking to expand both internally and beyond its national borders, says the latest CPhI Pharma Insights report, based on research carried out by Global Business Reports (GBR). In the past decade per capita GDP in Turkey has more than trebled, with a corresponding increase in disposable incomes. Against a background of rising economic prosperity, an ageing population and a social security system that covers 97% of the population, the Turkish government has been expanding the healthcare infrastructure and is now aiming to reduce its overall healthcare trade deficit by encouraging local industry to produce a greater proportion of domestically manufactured drugs.

Government support is vital for emerging domestic pharma economies to grow, flourish and create an environment for investment. As Professor Burak Erman, Koç University, notes: ‘Only 10 years ago, Ireland, South Korea and Singapore embarked on the development of [their] pharma industries. The governments gave great support to pharma companies, which attracted the attention of Western companies, and a lot of money was poured into projects. These companies are now leading the world in production, especially in South Korea. This began with tax incentives.’

Turkey has traditionally focused heavily on generics manufacturing, but more recently the industry has shifted from standard contract manufacturing to focus more intensively on research and development.

During profitable years, Turkish pharmaceutical manufacturers were earning so much money from selling generics that they did not spend time on research

The delayed uptake in research efforts has been attributed to a number of factors. ‘A lack of qualified people to conduct research has prohibited the industry from focusing more on molecule generation, as has the hesitance of companies to challenge what has been their usual business model. During profitable years, Turkish pharmaceutical manufacturers were earning so much money from selling generics that they did not spend time on research,’ said Professor Erman.

‘Beyond anything else, the major obstacle to the development of a more research-focused industry has been time. Real drug research – from beginning to end – takes 10 years and is deemed unnecessary and too risky; only one out of a hundred would succeed.’

The formation of collaborations and partnerships will be a key driver of Turkey’s R&D sector, and international companies are showing an increased interest to break into the Turkish market. Big players such as Sanofi are already present in Turkey, and AstraZeneca has also expressed its eagerness to bring research to Turkey.

However, an obstacle to this could be the negative impressions regarding Turkey’s intellectual property (IP) laws and the lack of IP protection, a view that is refuted by Turkish pharmaceutical companies. In fact, in the recent International IP Report published in January 2014 by The Global Intellectual Property Centre (GIPC) under the US Chamber of Commerce, Turkey ranked 10th out of 25 countries in terms of patents, related rights and limitations.

‘We sustain our Information Safety Management System by involving our complete workforce, protecting the continuous workflow, preserving the business continuity and increasing the collective awareness through inter-company seminars, risk management studies and internal audits. By means of this internationally auditable certification, we are proud to provide our business partners with high confidentiality commitment that substantiates how much we value our customers.’

According to ERA Pharma, government support for the generics industry favours local manufacturing of finished formulations in Turkey. Although the government currently covers more than 80% of total medical expenses, this means it has been difficult for pharmaceutical manufacturers to produce anything other than generics, leading to a regional industry struggling to remain profitable.

As a consequence, some companies have moved into niche areas of the market, including over-the-counter drugs and oncology. Currently around 93% of oncology drugs in Turkey are imported, but this is changing. Mustafa Nevzat is one example of an established domestic manufacturer, with 10 molecules in production at its oncology plant and a commitment to invest more in this field. 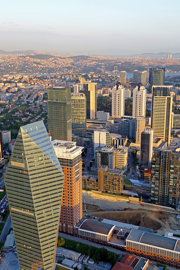 In the past decade per capita GDP in Turkey has more than trebled, with a corresponding increase in disposable incomes

Moreover, the government has prioritised domestic production of oncology drugs. Onco Koçsel has recently established one of the industry’s largest manufacturing plants for these products. ‘This will be a unique investment for the country since it will be the sole pharmaceutical plant to produce such a broad array of oncological products,’ says Tugçe Koç, General Coordinator, Onko Koçsel. This new production facility could take Turkey into the realms of leading the global oncological drug field through the 184 different products that it seeks to develop in its portfolio.

A considerable challenge within the Turkish pharmaceutical industry is the government’s price referencing system and fixed euro-lira conversion rates. The price referencing was deemed a highly negative aspect of the industry by 100% of companies surveyed. These factors, alongside regulatory change, ‘are the sources for the decline in industry profitability’, according to attorney partnership Yüksel Karkin Küçük.

As part of the price referencing system, the government compares costs of production ex-factory prices in other countries (currently Portugal, Spain, Italy, Greece and France). The lowest price is set as Turkey’s reference price and a percentage of that is determined as a ceiling price, which according to the Pharmaceuticals Manufacturers Association of Turkey (IEIS), means Turkish prices are ‘well below their European counterparts and that puts enormous pressure on profitability’.

After the initial price-referencing obstacle, Turkish pharma manufacturers are faced with a much larger issue in the shape of the euro-lira exchange rate used in the price calculation. The government has fixed the price of the euro to approximately TRY1.95, despite it being worth approximately TRY3, meaning further discounts and resulting in an industry that may struggle to remain profitable. Professor Erman added that due to this ‘even the industry’s largest players are in survival mode. They need to maintain their profitability’.

The implications of price referencing have been far reaching, with even multinational companies reluctant to manufacture new medication in Turkey as it is no longer economically viable for certain products. ‘Turkey’s system of price referencing is one of the biggest obstacles that Turkish companies face in developing innovative product lines: especially if one considers developing new molecules and biosimilar products,’ said Ersin M. Erfa, General Manager at Centurion. ‘We invested significantly in these areas. Some of our projects failed due to the price-referencing system.’

With the domestic market suffering reduced margins and profitability, manufacturers are looking at new opportunities for growth, particularly in export markets. This approach is also supported by the Government, as it will help to reduce the country’s trade deficit.

The IEIS has taken the initiative to set up a Turkish Pharmaceutical Exporters Platform with the specific aim of raising international competitiveness. With a high standard of pharmaceutical regulation and manufacturing standards comparable to the West, alongside a geographic position ideal for distribution across the Eurasian region Turkey is well placed to supply the Middle East and North Africa (MENA) region.

One company, Mustafa Nevzat, is currently exporting to more than 30 countries with US$44m in international sales, and is predicted to increase this to 40 countries and $50m in coming years. However, the lack of EU membership makes it more difficult for manufacturers to make inroads into the profitable European and US markets, and many manufacturers are choosing to take a partnership approach within Europe.

‘We are targeting the CIS, the Gulf States, Africa, Russia and Europe,’ said Tugba Koç, Board Member, Marketing and Sales, Onko Koçsel. ‘The European market is a huge challenge and that is why we are meeting with a number of companies that are already operating in the region. We are about to sign a few toll manufacturing agreements to enter Europe with the help of our partners.

‘Turkey stands as our main market, but within the next 10 years we would like to have 80% of our sales generated through foreign market activity. We have designed our product portfolio with this in mind. Since making this decision, our sales volume has experienced double-digit growth,’ says Centurion’s Erfa.

Already Turkey has witnessed investment with multinational players such as Sandoz and Novartis, having nurtured significant operations in the region. The market overall has seen several major acquisitions over the past year and the country remains attractive because of the reimbursement system, with the government buying the vast majority of pharmaceuticals produced.

The future of the industry is found in niche products

However, there is now a wider acceptance that market entry needs to be based on more than just acquisitions and generics as margins in this part of the market continue to decline. ‘The future of the industry is found in niche products. Unless multinational companies can develop these products, they will struggle locally,’ said Kemal Yildiz, General Manager, Berko Pharmaceuticals. Recently there has been a rise in the number of partnerships between international firms and rising domestic stars. For example, Mustafa Nevzat is partnering with Amgen to increase its work in biotechnology.

Although is it clear considerable difficulties are present for those companies looking to supply drugs domestically with Turkey, this has had the knock-on effect of increasing the dynamism in the market and improving overall competitiveness of the sector. As a result, the country now boasts a highly price-efficient manufacturing industry (far cheaper than those in the West) coupled with comparable regulatory standards. If price conditions ease this should provide the right environment for a burgeoning industry.