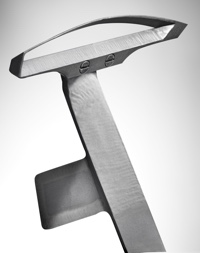 Lödige Maschinenbau is presenting a new type of shovel for mixing solids in horizontal Ploughshare mixers at the show. The German mixer expert says the patented High Efficiency Shovel requires less drive power than a standard shovel, with substantial energy savings as a result.

The eye-catching High Efficiency Shovel or HES features an opening in the blade, which results in a significant reduction of about 40% in the starting torque and reduces the idle power. A lower mixer motor output is thus required.

The efficiency of the shovel is also apparent in the operation of the Ploughshare mixer: the torque is reduced by about 10%, enabling further energy savings.

The HES is suitable for industries in which heavy products are processed or where the individual particles of solid materials tend to clump.

Another Lödige machine at Achema is the Ploughshare batch mixer FM 130 D for processing bulk materials. This model is characterised by short mixing times and a high level of batch reproducibility.

With the Ploughshare batch mixer FKM 2400 D the company will unveil a versatile machine owing to its various optional configurations. Wetting and granulation fixtures are available, and even pumpable masses can be processed.

The LC coater series was specially conceived for the coating of tablets. All three sub-processes relevant for coating tablets with a film were optimised for spraying lacquers, mixing tablets and drying tablets. Thanks to sophisticated process technology the LC 70 works up to 40% faster than conventional machines.