Major global pharmaceutical companies are entering into strategic partnerships with Chinese pharma manufacturers to gain a foothold in the country\'s rapidly expanding market for biologics.

Strategic partnerships are being inked in China to enable multinational pharma majors to establish a leadership presence in developing novel biologics in the Asian country. Biologics cover a wide range of pharmaceuticals and several multinationals are vying to market their biological products in China and compete with local state-owned enterprises manufacturing similar products.

With the global biologics market also set to explode, multinational companies are finding increasing penetration in the emerging markets of India and China. Pharmaceutical majors like GlaxoSmithKline (GSK), Aventis and Merck and Co have already entered China’s biologics market.

Last year, GSK acquired the remaining 51% equity interest of Shenzhen Neptunus Interlong Bio-Technique Company in the joint venture company, Shenzhen GSK-Neptunus Biologicals for a total cash consideration of £24m ($39m). Approval by the Chinese authorities has made GSK the sole owner. The alliance focuses on the development and manufacture of seasonal and pandemic influenza vaccines for China, Hong Kong and Macau. GSK had increased its equity share from 40% to 49% in August 2010.

The decision to acquire the outstanding interest also reflects GSK’s intention to expand further its vaccines presence in China through the establishment of a local vaccine manufacturing capability.

In early September this year, AstraZeneca’s MedImmune subsidiary formed a joint venture with Chinese contract research organisation WuXi AppTec to bring an inflammatory disease candidate to the Chinese market. MedImmune is the global biologics arm of AstraZeneca, and a leading r&d outsourcing company. While MedImmune is to contribute its technical and development expertise to the 50:50 partnership, WuXi will provide local regulatory, manufacturing, pre-clinical and clinical trial support.

The candidate – MEDI5117 – is a fully human interleukin-6 (IL-6) targeting monoclonal antibody developed using MedImmune’s YTE technology, which has extended the antibody’s half-life and clearance in the body. The mAb is currently in phase I studies in the US and Europe, and has potential in a broad range of inflammatory and autoimmune diseases, notably rheumatoid arthritis.

Medimmune retains an option to gain full control of MEDI5117 at the point of commercialisation, and is eligible for milestone payments as the programme progresses.

‘WuXi AppTec is a company with strong leadership in the Chinese pharmaceutical r&d sector and the deal will help us address the healthcare needs of Chinese patients through the co-development of MEDI5117,’ said Bahija Jallal, executive vice president, r&d, MedImmune.

He added that the deal would complement Astra Zeneca’s investment in this important market, and tapping into WuXi’s local expertise would carve six years off the time to get MEDI5117 onto the market in China. 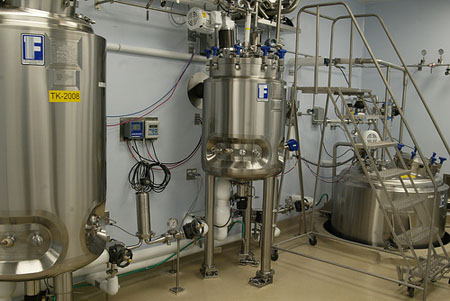 MedImmune recently entered into a joint venture with WuXi AppTec. Pictured above is the pilot lab at its Gaithersburg headquarters

Private Equity major Warburg Pincus had also upped its stake in human plasma collection company China Biologic Products (CBP), its tenth purchase of shares in the company. Warburg Pincus had invested in CBP during 2010, through a series of secondary purchases of common shares from existing shareholders.

Based in Shandong, CBP is a major Chinese medical production company that collects human plasma from across the country and manufactures human albumin, intravenous immunoglobulin and speciality immunoglobulin products for treating rabies, hepatitis B and tetanus. It manufactures more than 20 plasma-based products through its indirect majority-owned subsidiaries, Shandong Taibang Biological Products and Guiyang Dalin Biologic Technologies. The company also has an equity investment in Xi’an Huitian Blood Products.

It recently donated 1,000 bottles of Tetanus immunoglobulin through its Guizhou Taibang subsidiary for those injured in the devastating earthquake that struck Yunnan Province, China on 7 September 2012.

Similarly, in early September, Anaphore, a US developer of protein pharmaceuticals backed by venture capital firms 5AM Ventures and Versant Ventures, acquired Shanghai-based RuiYi, bringing the company a powerful biologics drug discovery platform focused on the discovery and development of biologic therapies targeting G protein coupled receptors. The acquisition followed the recent closing of the Second Tranche of the company’s Series A financing for $15m.

‘The acquisition of RuiYi in China allows Anaphore to access the substantial scientific expertise, capital and potential new collaboration opportunities in the Chinese pharmaceutical marketplace,’ said Paul A. Grayson, president and ceo of Anaphore. RuiYi also provides Anaphore with a wholly foreign-owned enterprise in Pudong Shanghai, a necessity for conducting business in China.

Growth in sales and profits

Another trend that has come to the fore is the large number of pharma academic collaborations and research consortia. GSK and Daiichi Sankyo have entered into a discovery research collaboration with Yale University and the Japanese National Cancer Centre. The GSK-Yale alliance focuses on a specific and interesting class of molecules called proteolysis targeting chimeric molecules, which they will use to design protein-degrading drugs that could have potential in multiple disease indications.

BMS has also entered into two collaborations in oncology and immunoscience: one is called the International Immuno-Oncology Network (II-ON) and consists of 10 leading cancer institutions; and the other is with Tsinghua University in China.

All in all, the biologics sector in China is set for an unprecedented level of activity in the coming days.