Can epi-drugs capture the next wave of growth?

An explosion in the field of epigenetics has revealed multiple ‘goldmines’ in the form of biological targets. Pharmaceutical companies with the most developed implementation capabilities are likely to capture the next wave of this growth

Why isn’t a human heart cell able to divide and multiply? After all, this might (theoretically) mean we could have an additional heart, in standby mode, with the potential to prevent heart attack-related deaths. Why do identical twins end up having different lives in spite of their similar genetic make up? Questions such as these are highly perplexing; but, nature has a one-word answer: epigenetics!

A copy of the entire genome (>3 billion DNA base pairs) is present in all cells that have a nucleus. However, specific signals are given to each cell that can either turn a particular gene (or a set of genes) on or off. The results bring a world of difference, not to mention life in general. The branch of study that deals with changes in gene expression and/or phenotype without alterations in DNA sequence is epigenetics.

The length of a strand of DNA is about 2m. There are times when a relaxed DNA conformation is required to do routine housekeeping; however, there is an external mechanism required to coil the DNA inside the nucleus — which has an average diameter is only 6 microns! This mechanism (epigenetic modification) is necessary to preserve DNA from damage or undesired effects.1

DNA hypermethylation is believed to be one of the oldest known epigenetic events and is implicated in various cancers and other diseases conditions.3 Epigenetic drugs (epi-drugs) such as Vidaza (5-azacytidine, Celgene) and its deoxy derivative Dacogen (Decitabine, MGI Pharma) limit the potential of DNA methyl transferase (DNAMT, a writer enzyme that implants a methyl group on DNA) and can render a therapeutic cure in myelodysplastic syndrome.4

A massive number of clinical trials (641, Figure 1) are planned, ongoing or completed to the test the efficacy of these drugs as a solo agent or in combination.5 For example, an oral form of 5-azacytidine (developed by Celgene) in combination with Pembrolizumab (a monoclonal immunoglobulin antibody developed by Merck) is currently being investigated for the treatment of metastatic non-small lung cancer.

Figure 1: The FDA-approved DNA-methylation inhibitors (yellow) and HDAC inhibitors (blue) that are being tested in clinic trials for other indications. Trials that are withdrawn, suspended or terminated are removed for the purposes of this article (clinicaltrials.gov)

The discovery that histone deacetylases — HDACs, eraser enzymes that remove acetyl group from histones — regulate gene expression catapulted the field of epigenetics onto a whole new level.6 More than 18 human HDACs have been identified and their therapeutic benefits are currently being unlocked.

For example, HDAC1 is implicated in prostate and gastric cancers, HDAC2 in colorectal cancer, HDAC3 in prostate cancer and HDAC6 in breast cancer.6 In 2006, FDA approved Zolinza (a pan-HDAC inhibitor, Merck) for the treatment of cutaneous T-cell lymphoma (a form of skin cancer).7 Followed by this, other pan-HDAc inhibitors including Romidepsin (cutaneous T-cell lymphoma, Celgene), Belinostat (peripheral T-cell lymphoma, Spectrum Pharmaceuticals) and Panobinostat (multiple myeloma, Novartis) have been approved.8

Several clinical trials (389, Figure 1) were initiated to maximise the ‘repurposing’ benefits of these FDA-approved HDAC drugs.5 For example, Zolinza — the top contender involved in a total of 195 trials — is currently being evaluated as a single agent for the treatment of Niemann-Pick disease (a type of neurodegenerative condition), and Panobinostat, in combination with FDA-approved anticancer drugs Docetaxel and Prednisone, is being evaluated in patients with hormone refractory prostate cancer.

The global epigenetics market was valued at more then $4 billion in 2014 and is forecast to grow at a CAGR of 19.3% to reach $16.3 billion by 2022.8 Three key drivers must be credited for this unprecedented growth (Figure 2). 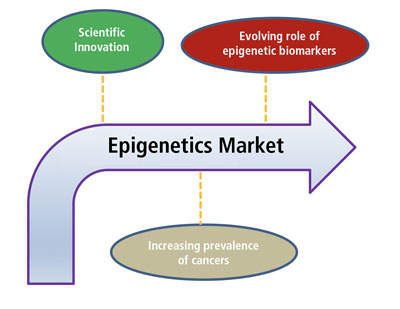 First and foremost, scientific innovation and advancements have greatly increased the breadth and depth of epigenetic research. The shift in focus towards post-translational histone modifications in general — the erasers (histone deacetylases and histone demethylase) and readers (bromodomain-containing proteins) in particular — have revealed multiple biological targets, which has led to an unprecedented number of publications, patents and clinical trial investigations.

In addition to FDA-approved HDAC inhibitor drugs, fresh HDAC inhibitors are now a part of more than 125 clinical trials covering a diverse spectrum of therapeutic areas. The clinical significance of histone demethylase inhibitors (a total of 8 trials) and bromodomain inhibitors (24 trials) is under intense scrutiny.

Also, a huge majority of epi-drugs (in clinic and in market) have a nexus in oncology areas. Considering the increasing prevalence and diagnosis rate of haematological malignancies and solid tumours, epi-drugs have become a cynosure in oncology treatment.

In addition, the evolving role of epigenetic biomarkers in patients and high-risk individuals has gained significant traction. For example, the levels of DNA methylation at the C1R region is believed to be a prognostic biomarker and indicative of overall survival in acute myeloid leukemia (AML).9 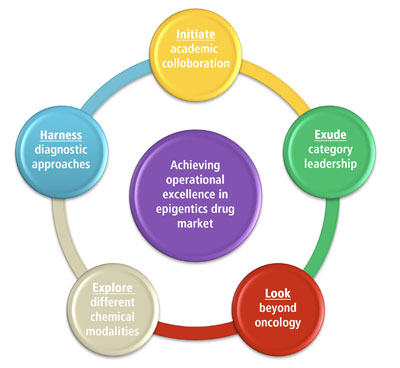 Epi-drugs are poised to capture the next wave of growth in pharma, given their enormous utility in oncology and other areas. An explosion in the number of clinical candidates, coupled with the identification of epigenetic targets and biomarkers, are scientific cues that the field is onto “something.” However, for pharma companies to fully capitalise on the value of the epigenetics drug market, an effective operational strategy must be applied (Figure 3).

The effect of modifications in gene expression, modulated by changes in DNA or histones, has illuminated our understanding of physiological processes and its relevance in disease. Epigenetic targets have taken centre stage in the pathway to the discovery of therapeutic benefits. This trend is likely to progress for decades (or even centuries) to come. The future could bring additional surprises, including epi-drugs that could modify RNA-based epigenetic regulation.