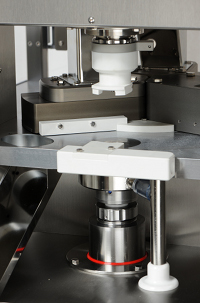 Transfer of tablet production between machines is common as manufacturers seek to increase production or replace old equipment with newer models. However, due to the complex powder mechanics involved in tabletting, any changes in process that increase speed and the duration and/or force of compression, can lead to the failure of a tablet formulation to work successfully on new equipment. Even minor amendments in tooling design can change powder compaction properties and result in tablet failure due to capping or lamination.

To help avoid these problems, Quay Pharma uses a MedelPharm compaction simulator, which can mimic any existing tablet press available on the market. The simulator has only one tabletting station with the punches being programmed to follow the force displacement profile of any tabletting machine. The tablets can be compressed at both low and high speed, and parameters such as compression force and speed can be recorded as well as ejection force.

For the Actavis study, tablets were compressed using the current machine profile and then using the new machine profile. Data was captured throughout the tabletting process to allow a thorough understanding of what impact the changes in compression profile were having on the finished tablet. From the data obtained, and using very small quantities of material, Quay was able to assess accurately the properties of the Actavis tablet and suggest how a revision in tooling would enable the tablet to be formed effectively on the new equipment, while maintaining throughput speeds.

‘Quay’s knowledge and experience was invaluable in helping us to transfer successfully production and avoid the disruption that can occur during this process,’ said Steve Brown of Actavis.