Containment gets more modular and flexible

As the market for containment solutions grows and develops to meet new needs, Susan Birks looks at some of the latest trends and changes.

The building of cleanroom space will have risen by 5% over the course of 2013, according to the latest forecast in Cleanrooms World Markets, published by market research company McIlvaine.1 A key proportion of this new space is for the pharmaceutical sector, and the greatest increase is being seen outside Europe and the US, the report says, with much of it in Asia and Russia.

The need for process containment in the pharma sector is increasing for many reasons, and has led to an array of new product developments. The major driver is the increased potency of new drugs, which means that handling procedures have to protect workers to a higher degree. ‘It is very normal now to see containment levels of less than 1µg/m3 and frequently less than 50ng/m3, occasionally 10 to 20ng/m3,’ says the CEO of Powder Systems (PSL), Maurice Pitcher. ‘It is also very common now to specify Occupational Exposure Levels (OELs) during sampling period of operation rather the 8 hours’ time weighted average (TWA) to verify performance.’ As a pioneer of containment, PSL has refined a range of contained vessel charging solutions that will protect both the operator and the product down to nanogram containment levels.

As well as an increasing awareness of worker safety globally, driven in part by governmental regulatory bodies, Pitcher says global application standards of containment are becoming more uniform. They are also under constant review. The European Medicines Agency (EMA) has recently issued a draft Guideline on setting health-based exposure limits for use in risk identification in the manufacture of different medicinal products in shared facilities.2 In this Guideline, the EMA is proposing to adopt a more scientific and data-focused approach to setting limits. The draft is open for consultation and the deadline for comments is 30 June.

The need for operational efficiency and cost effectiveness also means that best practice is constantly being reviewed and improved. The cost of running a large cleanroom in terms of air handling and clean down has led equipment developers to look for cheaper options.

For extreme containment it is now normal to envelop the entire process or major part of the process, with significant equipment modification to integrate successfully

‘There is an increasing use of flexible containment; however, there is an over-reliance on this form of containment for extreme levels and arduous production processes,’ says Pitcher. ‘For extreme containment it is now normal to envelop the entire process or major part of the process, with significant equipment modification to integrate successfully.’

For any permanent containment, ease of cleaning down equipment and clean in place operations are seeing developments. Comecer’s new version of its Pharma, Hospital, Laboratory (PHL) isolator, for example, has seen the adoption of touchscreen HMI, decontamination-ready Vapour Phase Hydrogen Peroxide (VPHP) technology, along with other features to ease cytotoxic material handling. Comecer has also integrated VPHP technology into its Modular Sterility Testing Isolator (MSTI).

Much of the current development is in streamlining handling processes and making them easier to carry out. For example, the Fast Air Lock ISS 1000 has been developed by Bosch for transferring pharma equipment into and out of isolators. An efficient evaporation process and an optimised loading unit result in very fast cycle times – approximately 20 minutes. The ISS 1000 is available as an integrated or standalone module and operates independently of the main filling isolator.

An expert in the area of roller compaction, Gerteis says its customers are demanding solutions that are easier to use. As a result of a joint venture with Solo Containment, Gerteis now offers a competitively priced containment upgrade for clients handling OEB 3 and 4 API compounds. The system design may be modified to suit any model in its roller compactor range and provides containment in a convenient fashion and the opportunity to use the roller compactor without an isolator at any time.

Other changes are being seen in cleanroom structures themselves. As drugs become more niche, production runs are becoming much shorter with lower volumes. Manufacturing lines need to be more flexible and permanent structures may have a short period of usefulness. This has led to the introduction of both modular cleanrooms and equipment offering greater production flexibility. The trend for modularity is demonstrated by Comecer’s Modular Dispensing and Weighing Isolator (MD&WI), which has seen standardisation that enables it to handle most applications in terms of simple dispensing, transferring and weighing activities of potent compounds up to more complex chemical synthesis and formulation processing.

As drugs become more niche, manufacturing lines need to be more flexible and permanent structures may have a short period of usefulness

In terms of cleanroom structures, Howorth and G-CON have combined forces to offer scalable and repurposable containment rooms for GMP production. G-CON already markets cleanroom PODS – self-contained cleanroom systems for biopharma-ceutical processes and Howorth is applying its expertise in clean air and isolator technologies to the venture.

US company LifeTek, recently acquired by M+W Group, is also developing complete bioprocessing and aseptic filling suites (SmartFit Modular BioSuites) that can be erected within an existing building, anywhere in the world.

Split valve technology has been the mainstay of containment for many years but the current trend towards flexible, disposable containment solutions has seen the development of disposable flexible bag and in-liner solutions. But the interface and the bag is still a critical point. Hicoflex, developed by Nitro Pharma Systems, comprises a disposable split valve-style technology that enables flexible transport or process containers to be docked on and off in a repeatable manner while complying with containment requirements.

The expense of cleaning and containment is also leading to a greater deployment of single use technologies alongside containment equipment. ATMI, for example, is offering the first all-single-use cGMP fill/finish platform for pharma and biopharma applications through an exclusive agreement with French company Disposable-Lab, a clinical filling services and contract manufacturing organisation. Designed for bioprocess applications from clinical batch to industrial scale, the system is modelled on traditional manufacturing fill/finish processes, but on a much smaller scale. All of the process equipment used with the fill/finish platform is disposable, including the connectors, vials, baskets and caps.

The new platform’s operation involves decontaminating the non-disposable box in/flushing isolator with hydrogen peroxide. The vial baskets are then manually placed in the preparation isolator before the vials are filled using disposable dispensing needles in the transfer area. Weighing and capping operations are performed in a sterile finishing isolator, where the vials are closed in one step prior to weighing.

‘Aseptic filling is increasing at perhaps a greater rate than high potency capacity due to its acceptance as a preferred method of production and personal protection,’ says Pitcher. 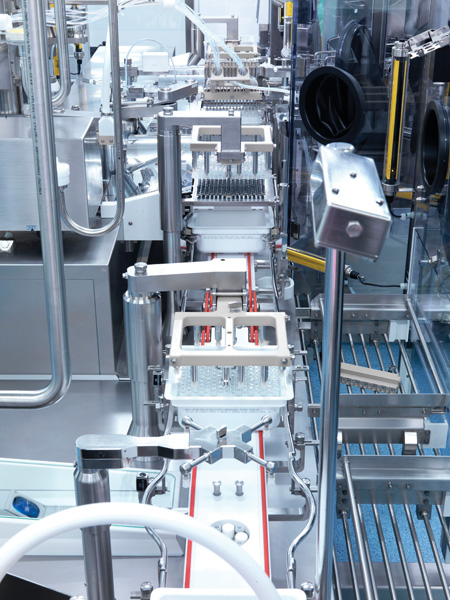 Minimal human contact on such lines is the goal. For example, Vetter’s new filling line at its Ravensburg facility in Germany requires minimal human contact, because of features such as fully automated transfer of sterile packed tubs from preparation room to Class A cleanroom and throughout the filling process. The line is also said to take a novel approach to zonal transition when moving tubs to higher cleanroom classes. Restricted Access Barrier Systems (RABS) and novel disinfection techniques are also included as well as a special spray disinfection tunnel for bagged tubs, co-developed by Vetter and the equipment manufacturer.