Humans shed and regrow their outer skin cells every 27 days, equating to around 1000 new skins in an average human’s lifetime 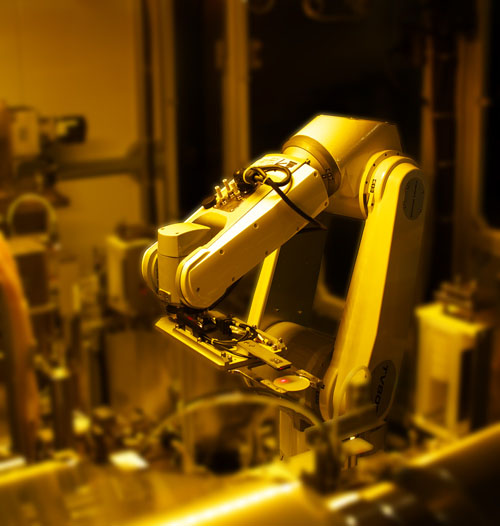 Even in a cleanroom environment, a worker will shed 600,000 particles of skin per hour. With this flakiness in mind, Nigel Smith, Managing Director of Toshiba Machine partner, TM Robotics, explains how clean room robots can eradicate the risk of human contamination.

Some industries rely on maintaining a controlled cleanroom environment, with strict restrictions on the number or airborne particles in the area.

This includes dust, vapours and moisture contaminants. Keeping these particles in check is essential for minimising damage to vulnerable products and this relies on the right processes and equipment to maintain the necessary level of control.

The cleanliness level of a cleanroom varies, with ISO Class 1 ranked as the cleanest, through to ISO Class 9, which is the lowest level by clean room standards.

Typically, cleanrooms ISO Class 7 or cleaner have a separate changing atrium for gowning, away from the main working area. This reduces contaminants from entering the clean area via movement of workers.

Yet, the time it takes for workers to put on and take off the protective suits costs businesses time and money, which is a huge incentive for implementing automation as an alternative.

A non-cleanroom robot might emit a relatively low number of particles — at least when compared with its human counterparts. However, considering a gripper opens and closes 10,000 times during its lifetime, the potential for particle emittance problems throughout the working life of a robot can add up.

Like any mechanism, robots can shed particles from belts, gasses from hoses, and dust particles from the movement of the end effectors. It is this particle disbursement that can be the critical issue for cleanroom robotics.

Although not nearly as flaky as humans, just a small amount of dust shed by a robot could damage some sensitive products while in production.

Consider electronics as an example. A single particle finding its way onto a hard drive during manufacturing is enough to render the product useless. Specialised cleanroom robots are built from non-dusting materials for this very reason.

Semiconductor manufacturing is an example of wherein cleanroom robots are particularly beneficial. The miniaturisation of electronic components has brought about challenges of assembling tiny constituent parts as part of semi-conductor wafer fabrication.

Robots have no problem seeing and manipulating the impossibly small elements that make up electronic devices. That said, manufacturers need to choose the correct type of robot and implement it effectively.

Cleanroom robots can only be used if they meet the specific clean room standards — not just any robot will do. Choosing the correct robot for a clean room application depends on the classification of the robot, compared with the strictness of the cleanroom environment.

Robots are certified as appropriate for different industries and cleanroom levels according to the number of particles they generate when in motion. Many are certified for use in semiconductor, biotechnology, pharmaceutical and medical industries, offering huge benefits in increased efficiency and reduced contamination.

Certification is not the only thing manufacturers need to consider when selecting a clean room robot.

The position of the robot could also impact its effectiveness in this environment. In wafer manufacturing, for instance, the robot arm should most often be mounted below the product, so that any contamination falls away from the vulnerable wafer.

If there is a need for the arm to be mounted about the wafer, then the cleanliness standard of the arm needs to be much higher.

Ultimately, the cleanroom robot should match the needs of the application. It is not necessary to over-specify and use an ISO class 1 robot for an ISO class 3 room. This will only be more costly and narrow down automation options.

Typically, semiconductors need stricter environments, compared with other products such as LCDs and hard disk drives. However, this can differ on a case by case basis.

Another consideration is receiving and installing the robot. Stringent protocol applies when delivering the robot into the critical environment so that accidental particle introduction is minimised.

This requires wrapping the new robot in multiple layers of packaging, which should only be removed onsite as the robot passes through cleaner spaces, is wiped down repeatedly and thoroughly cleansed using a vacuum system.

Purchasing and correctly installing cleanroom automation can be a costly process. Yet, when you consider the significant ongoing costs of a human going into and out of the cleanroom area, and the time it takes to put on the protective suit, it's clear there are huge long-term savings to be had.

Cleanroom robots increase efficiency and eradicate human contamination. These robots work quicker than humans and don't need to spend time getting into and out of a protective suit multiple times a day.

Although the average human may shed 600,000 particles of skin per hour, you won't have those issues with the right cleanroom robot.

All Toshiba Machine robots have cleanroom options available, perfect for applications in semiconductor and pharmaceutical manufacturing. The TH-CR series extends to ISO class 4, or FED class 10 depending on your preferred classification type.

Are cobots inherently safe?
Cobots versus industrial robots: What’s the difference?
Toshiba Machine changes name after Toshiba Corp split
To service or not to service
Industry 4.0: dispelling the myths
Tips for choosing a 3D vision system
Should robots pay taxes?
High performance 3D simulation in robot software
What is Made Smarter?