The biotech sector is boosted by invention and shows no sign of slowing. Biopharmaceutical pipelines are broadening and production techniques improving. Susan Birks reports

The amazing advantage of biotech is its diversity. The diversity of living organisms is now reflected in the diversity of biotech solutions that are changing the world around us. Biotech is now applied to areas such as sourcing pharmaceutical ingredients, drug delivery systems, drug production processes, quality control and in reducing undesirable waste products, to name but a few.

Pioneer companies that took the biotech route are now reaping the dividends. Novozymes and Codexis are examples that have focused on the biotechnology of enzymes to create diverse solutions for a range of markets, including biopharmaceutical production. In addition to improving manufacturing processes, biotech has revolutionised the development of drugs, vaccines and diagnostics. And now cell-therapies are rapidly joining the list of promising treatments.

According to Greystone Research Associates,1 the number of new FDA-approved biologicals has averaged between four and five per year over the past decade but this number will increase with the eventual definition and streamlining of an approval process for evaluating biosimilars for market authorisation in the US. The FDA expects to receive multiple applications requesting marketing approval for biosimilars for a number of underlying biological drugs previously approved under a Biologics Licence Application.

There is a broadening of pipelines and biosimilars in the US and Europe, lending impetus to the global market

Greystone says oncology remains the largest segment, accounting for 35% of all biologics. About two-thirds are antibodies or antibody-drug conjugates (ADCs). Recombinant drugs for cardiovascular conditions are primarily glycoproteins, with the remainder monoclonal antibodies (mAbs). The majority of proteins for orphan diseases are enzymes. Other important disease classes for biologicals include antivirals, haematopoietics, and drugs for ophthalmology.

Frost & Sullivan2 says that while there is a strong stream of mAbs, there is a broadening of pipelines and biosimilars in the US and Europe, lending impetus to the global market, which is expected to soar from US$1.2bn in 2013 to $24bn in 2019. ‘Companies are augmenting their biotech pipelines with new, clinical phase products – often products that are widely different from the company’s existing pipeline. In addition to mAbs, follitropins, interferons and low molecular weight heparins are likely to emerge in the long run,’ says Analyst Srinivas Sashidhar.

Research and consulting firm GlobalData3 says biologics will play an influential role in shaping the future of cardiovascular (CV) drug treatment, as these and other emerging therapies will compete for patients who cannot tolerate statins, or for whom statin therapy alone is insufficient. GlobalData analyst Eric Dimise says that while statins have long been the dominant therapeutics for out-of-control, low-density lipoprotein cholesterol (LDL-C), new agents in the late-stage pipeline are poised to inject some excitement into this space.

‘The headline-grabbing players in the CV pipeline are the proprotein convertase subtilisin/kexin type 9 (PCSK9) inhibitors, the first ever biologic agents aiming to break into the mainstream treatment regimen for hypercholesterolemia and CV disease,’ says Dimise. ‘These companies know that even if their PCSK9s are only used to treat the 5% of the estimated 70 million statin-intolerant hypercholesterolemia patients in the US alone, they could easily reap blockbuster-level returns that justify the upfront investments.’

Despite the intensified development programmes and the development of biosimilars, biotech pipelines are still beset by patent infringement issues and a lack of regulatory clarity. Just weeks after receiving two applications for approval for biosimilar products (Zarzio and Remsima), the FDA released information on its new ‘Purple Book’ – a list of licensed biological products and interchangeable biosimilars that is meant to be the biological equivalent of the pharmaceutical ‘Orange Book’.

Like the Orange Book, the Purple Book will seek to answer questions about the interchangeability of products – one of the most pressing issues associated with the approval of biosimilar products. Because of manufacturing differences, biosimilar products are not exactly the same as the products they aim to replicate. While the FDA’s regulatory processes are intended to ensure that an approved biosimilar product is therapeutically similar or the same as a reference biologic product, many regulatory experts have expressed concern over how companies will be able to illustrate interchangeability without extensive testing.

Another issue for those looking to move into biologicals is that biotech requires a special skill set and is research intensive. This has led some pharma companies to spin out their biotech capabilities into specialised divisions. It has created many mergers, acquisitions and alliances with companies having expertise in biosimilars manufacture and development. Teva’s alliance with Cephalon and Lupin Pharmaceuticals’ alliance with Neuclone are recent examples. In October, Fujifilm Corporation made a move to acquire the biopharmaceutical contract manufacturing organisation (CMO) Kalon Biotherapeutics, which has expertise in vaccine manufacturing. The deal will allow Fujifilm to enter the vaccine contract manufacturing market, joining others like IDT Biologika, which has the capabilities to produce viral and bacterial vaccines and sterile liquid dosage forms.

The biopharma sector has made rapid progress in scaling up production. It is fast embracing continuous processing while single-use technology has also brought major benefits. But more automation is required and there is a need for more off-the-shelf equipment to reduce the costs of design and engineering. 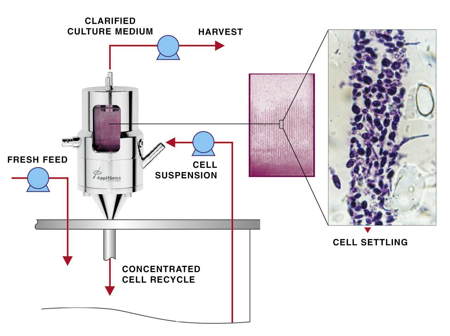 One of the main manufacturing trends is the move from a fed-batch mode, where media and other nutrients are added at fixed intervals to the culture and product is harvested at the end of the run, to the ‘perfusion’ method which involves the continuous addition of feed into a bioreactor, while harvesting through a cell retention device, resulting in higher cell density. Perfusion has been shown to massively increase cell densities in cell culture bioreactors compared with batch-based processes, resulting in higher product titres. This means much smaller bioreactor vessels may be used, improving process economics.

Among the other recent process developments are Applikon’s BioSep perfusion device; rather than employing physical filters, which may clog, it utilises acoustic standing wave technology that uses high frequency resonant ultrasonic waves to separate cells. Fujifilm Diosynth Biotechnologies has launched a new mammalian expression platform, Apollo, designed to create a robust ‘manufacturing-ready’ cell line that can be used for pre-clinical material through to commercial production, and delivers titres up to 3g/L before subsequent optimisation.

And ASI – Life Sciences, a provider of single-use systems and bioprocess equipment, has introduced what it claims is the first disposable heat exchanger for single-use heat transfer. The DHX is a modular heat exchanger based on the industry standard plate and frame design that uses bags to create a sterile fluid path. The bags fit tightly between five stainless steel plates and process fluid flows through the single-use bags, while the heating or cooling fluid runs in a counter-current flow through the plates in a completely isolated fluid path. Dimpled jacketing on the plates helps to create a turbulent flow and maximises heat transfer.