Drug formulators will have a broader range of drug delivery options in future, aiding both compliance and outcomes. Susan Birks reports

The global revenue for advanced drug delivery systems was estimated to be US$181.9bn in 2013, according to the report Global Markets and Technologies for Advanced Drug Delivery Systems. And by 2018, revenues are forecast to reach nearly $212.8bn, showing a compound annual growth rate (CAGR) of 3.2%.1 On a more local level, Decision Resources Group2 forecasts the US drug delivery device market alone will exceed $4.5bn by 2022. This market growth is largely being driven by product innovations, such as microneedle patches and subcutaneous implants, the company says.

Injection devices continue to represent the major revenues as more diabetic patients adopt pen injectors over traditional drug delivery methods such as insulin pumps or syringes. There is much innovation within this sector with Novo Nordisk, Sanofi and Eli Lilly all developing new versions or more complex pen injectors that are expected to launch within the next 10 years.

The global market for pulmonary drug delivery technologies reached $32.4bn in 2013 and is expected to grow to $43.9bn in 2018, a CAGR of 6.2%, according to BCC Research.3 Here too there is considerable innovation – most notably by MannKind, which recently received approval for the Afrezza inhaler, the first inhaler to deliver insulin. Drugs delivered via inhalers are absorbed rapidly by the body, and some see this breakthrough as having the potential to disrupt the traditional insulin delivery device markets.

According to LTS, a leading producer of transdermal therapeutic systems (TTS), the total transdermal delivery market is worth sales of around €4.6bn ($6.10bn). The company estimates that there are some 7,000 pharmaceutical drugs globally, only around 20 of which are currently available as transdermal patches.4 Experts believe there are currently at least a further 30 active substances that could be applied transdermally. The largest markets for patches are the US (approximately €2bn), Japan (€500m) and Germany (€400m).

Oral thin films (OTF) represent an exciting new market category. In 2010, the first Rx OTF was approved in the US. Today several active substances have been tested worldwide for their suitability with the OTF technology. LTS, which manufactures seven such products for partners, says it is currently working on more. Meanwhile, MIT has developed a technique to deliver pain medication locally to specific body parts in place of pills. It has created biodegradable, nanoscale films laden with drug molecules that are absorbed into the body slowly over 12 months. The system significantly exceeds the release duration achieved by most commercial controlled-release biodegradable films.

Various modes of ‘active’ transdermal technologies are being investigated. These include electroporation (short electrical pulses of high voltage to create transient aqueous pores in the skin), sonophoresis (using low-frequency ultrasonic energy to disrupt the stratum corneum) and thermal energy (employing heat to make the skin more permeable to drug molecules). Magnetophoresis has also been investigated as a means to increase drug flux across the skin.

The approval of Teva’s Zecuity migraine patch launched in January 2013 represented the first ‘active’ transdermal patch to become available in the US. The single-use, ‘battery-powered’ patch can be applied to the upper arm or thigh during a migraine and activated with a button; the patch delivers 6.5µg of the medicine over four hours through the skin, bypassing the stomach.

Chemical encapsulation, for example, is being used with endoxifenone, one of the most commonly used hormone therapies for breast cancer that, when taken orally, can cause unwanted side-effects

Topical applications are also the target for new technologies designed to enhance delivery. Chemical encapsulation, for example, is being used with endoxifenone, one of the most commonly used hormone therapies for breast cancer that, when taken orally, can cause unwanted side-effects. Researchers from the University of Illinois, Chicago, in collaboration with Northwestern University clinicians, have developed an encapsulation technique for endoxifen using dendron-based micelles and they were able to show in lab studies published in Advanced Functional Materials in May5 that it may be better at getting the drug across the skin barrier than other techniques.

Delivering the drug directly through the breast may reduce the number of mastectomies while lessening the side-effects of oral endoxifen. In addition, the water-soluble drug formulation allowed the dendron micelles to deliver endoxifen without the use of penetration enhancers such as alcohol or detergent.

The growth of transdermal delivery has, until recently, been limited to small molecule drugs, as size can prevent delivery of large molecule protein and peptide therapeutic compounds. However, new technologies are changing this.

TTP, a UK technology and product development company, has developed a new approach to the intracellular delivery of macromolecules and nanoparticles into cells at high speed and high volume. The cells and the material to enter the cells are passed through a vibrating metal or polymeric membrane that contains pores of a size similar to the cells. In its current design, the membrane is vibrated at around 100kHz as the fluid and cells pass through the pores.

This TTP technology relies on a physical effect alone and does not require chemical, electrical poration or biological vectors to enable transport into the cell. It is gentle on the cells, which provides a good level of survival along with excellent transport of material into the cells. The technique could have major implications for a range of cellular applications, including the transfection of cells with DNA material. TTP says it has already successfully demonstrated the transport of antibodies into cells and is now beginning to explore other biomolecules and the full capabilities of this exciting technology. 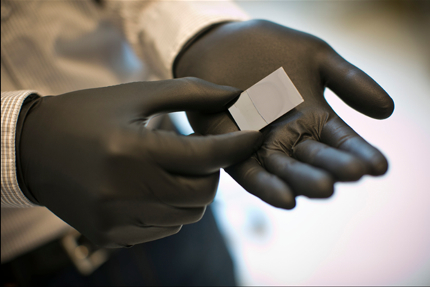 Meanwhile, ultrasound is another technique being used by researchers to help with local delivery of drugs from gels. For example, a report in the Proceedings of the National Academy of Sciences6 describes how a team led by David Mooney, from Harvard’s Wyss Institute for Biologically Inspired Engineering and the Harvard School of Engineering and Applied Sciences, used ultrasound to temporarily disrupt a gel such that it released short, high dose bursts of the drug. When the ultrasound stopped, the hydrogel ‘self-healed’, stopping the drug dose.

The technique is said to provide an innovative way to administer drugs with a far greater level of control than possible previously. The team also demonstrated in lab cultures and in mice with breast cancer tumours that this pulsed approach to drug delivery was more effective at stopping tumour cell growth than traditional, sustained-release therapy.

Subcutaneous implants are another major innovation area that can help to eliminate the risk of poor patient compliance. While implants are currently quite niche, products in development are looking to target more common conditions such as diabetes and hernias.

In July, MIT Technology Review reported7 on a preclinical trial on a user-controlled microchip-driven birth control method that it says could make it to market as early as 2018. When the user presses a button an electric current passes through and temporarily melts the chip, which causes it to administer 30µg of levonorgestrel, a second-generation progestin used in synthetic hormone birth control pills.