Endometriosis is a condition in which the lining of the uterus, the endometrium, starts growing outside the uterus, too. The cells can grow around the fallopian tubes, the ovaries and, occasionally, further away from the uterus. Maybe a quarter of all affected women have no signs or symptoms, but it can cause infertility and pain is common, particularly during periods, and chronic pelvic pain throughout the menstrual cycle is not unusual.

While the precise cause of the condition remains unknown, there is often a genetic predisposition. There is no cure, although menopause will generally stop the symptoms. In extreme cases surgery can help, but recurrence is common unless the surgery involves full hysterectomy. Pain management is important, and hormone treatments such as oral contraceptives can alleviate the symptoms.

Another potential treatment is being developed by AbbVie – the gonadotropin releasing hormone (GnRH) inhibitor elagolix.1 By blocking the GnRH receptors in the pituitary gland, the levels of circulating sex hormones are reduced. Numerous clinical trials are underway, both in pain management and in uterine fibroids.

In a double blind, placebo-controlled, dose escalating Phase I trial, 55 healthy women with regular menstrual cycles were given a single oral dose of 25–400mg elagolix or placebo.2 In the study’s second arm, subjects were given 50, 100 or 200mg elagolix or placebo once a day, or 100mg twice a day, for seven days. Treatment started about seven days after their periods began.

The drug was well tolerated and with rapid bioavailability after oral dosing, plus a quick decline in serum gonadotropin levels. Oestradiol suppression was observed in those given at least 50mg of the drug for 24 hours, and all the active treatment options maintained suppression for the whole seven days of the second phase in most subjects. 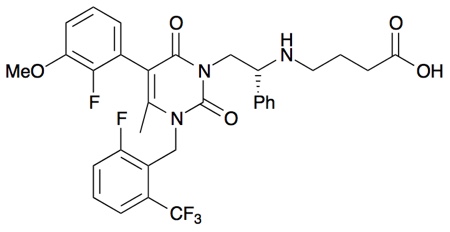 In a Phase II trial, 155 women with endometriosis, confirmed by laparoscopy, were given 150 or 250mg elagolix or placebo once a day for 12 weeks.3 The placebo group was then re-randomised to elagolix, and the active groups continued with the same dosage, for a further 12 weeks. The monthly mean reductions in pain scale ratings were greater with elagolix than with placebo, although the differences did not reach statistical significance. Monthly mean scores for dysmenorrhoea and non-menstrual pelvic pain were also reduced, with the differences significant versus placebo for dysmenorrhoea at weeks 8 and 12.

Its effect on bone mineral density has also been assessed in a trial that compared its effects with subcutaneous depot medroxy-progesterone acetate.4 A total of 252 women with pain caused by endometriosis were randomised to receive 150mg elagolix daily, 75mg twice a day or the depot for 24 weeks, and monitored for a further 24 weeks. All regimes gave improvements in pain scores, and only minimal mean changes in bone mineral density at week 14.

AbbVie recently released top-line data via a press release of a Phase III trial in endometriosis. After both three and six months, both those given 150mg once a day and 200mg twice a day met the study endpoint of a reduction in non-menstrual pelvic pain and dysmenorrhoea. The most common side effects were hot flushes, headache, nausea and fatigue, some of them dose-dependent.

This, and another Phase III study, are continuing.