Enzymicals scientists debate how to get one out of four: regio- and stereoselective ring opening of di-substituted epoxides catalysed by halohydrin dehalogenases 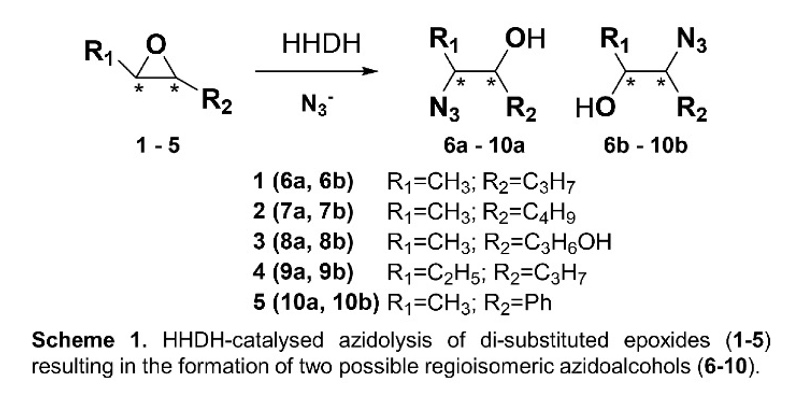 Dr Rainer Wardenga from Enzymicals AG and Prof Anett Schallmey from the Technische Universität Braunschweig, two experts, are discussing how the Enzymicals lyase enzyme panel can be applied for the selective ring-opening of di-substituted epoxides.

Halohydrin dehalogenase-catalysed conversions using azide as nucleophile proceed with different regio- and stereoselectivities and result in the possibility to selectively obtain the desired pure optical enantiomer of the respective azido-alcohols.

Halohydrin dehalogenase enzymes (HHDHs) belong to the class of lyases and are rare but industrially relevant enzymes as they catalyse the reversible dehalogenation of vicinal haloalcohols with formation of the corresponding epoxides. A set of novel HHDHs was recently discovered and characterised using HHDH-typical epoxide formation from β-haloalcohol substrates such as 1,3-dichloro-2-propanol and 2-chloro-1-phenylethanol as well as epoxide ring opening of terminal epoxides.

Industrially speaking, the most interesting feature of these enzymes is probably the ability to accept different nucleophiles in the catalysis of the epoxide ring-opening allowing the synthesis of novel C–C, C–O, C–N or C–S bonds.

The ring-opening of terminal epoxides by HHDHs has been investigated previously, showing that the nucleophilic attack always occurs on the sterically less hindered carbon atom of the epoxide ring. As only terminal epoxides were tested so far, we were interested how our HHDH panel performs in the conversion of trans-configured di-substituted epoxides with azide as nucleophile. The resulting azido alcohols are starting compounds for amino alcohols as valuable building blocks for active pharmaceutical ingredients. Our case study involves a representative set of 22 HHDH enzymes, screened for activity towards five different di-substituted epoxides with aliphatic or aromatic substituents (Scheme 1). 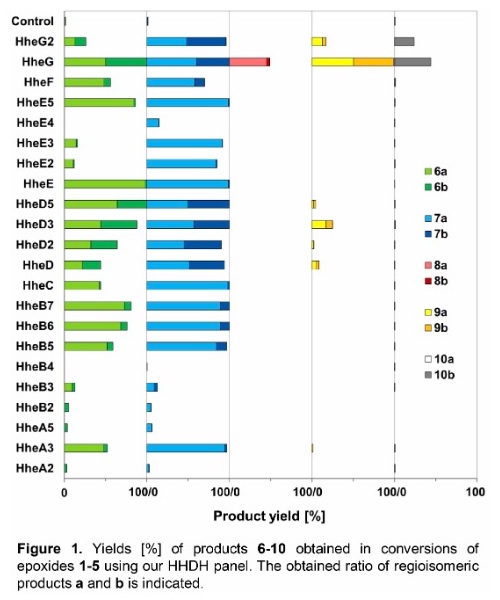 As a result, 17 out of 22 tested HHDHs displayed activity in the conversion of at least two substrates, trans-2,3-epoxyhexane (1) and trans-2,3-epoxyheptane (2), affording the corresponding azidoalcohols in varying yields. In contrast, epoxides trans-4,5-epoxyhexan-1-ol (3), trans-3,4-epoxyheptane (4) and trans-β-methylstyrene oxide (5) were converted by significantly less HHDHs with usually lower yields. Only one enzyme, HheG from Ilumatobacter coccineus, was active on all five epoxide substrates yielding highest conversion for substrates 1, 3, 4 and 5 among all tested HHDHs. The vicinally di-substituted epoxide substrates 1-5 each contain two stereocenters. Depending on the site of nucleophilic attack and the stereoconfiguration of the substrate during HHDH-catalysed epoxide ring-opening, two regioisomers and their respective pairs of enantiomers can be attained. Most enzymes formed both regioisomeric products, however, in varying ratios. The observed regioselectivity in the ring-opening of epoxides 1-5 was overall found to be enzyme- and substrate-dependent (Figure 1).

Selected regioselective HHDH-catalysed reactions were also performed on preparative scale to demonstrate the synthetic potential of this class of enzymes. For this, epoxide substrates 1 and 2 were each converted with a regioselective HHDH (HheE for substrate 1 and HheE5 for substrate 2) by means of whole-cell biocatalysis. Using each 200 mg of epoxide per reaction, 142 mg of 6a and 151 mg of 7a (50 % and 48 % isolated yield, respectively) were obtained in purified form. 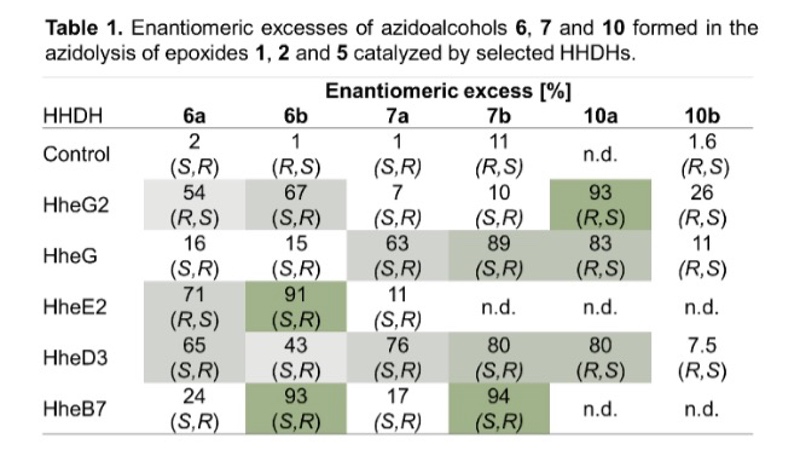 In conclusion, we can state that the substrate scope of HHDHs is not limited to terminal epoxides and many HHDHs are able to convert aliphatic methyl-substituted epoxides. HheG even accepted a much broader range of substituents. Furthermore, HheA3, HheC and members of HHDH subtype E were found to be highly regioselective. This way, we could demonstrate that our HHDH panel includes an innovative catalytic potential and can be applied in establishing novel synthetic routes, e.g. to chiral azido alcohols, with the advantage to selectively produce only one enantiomer starting from di-substituted epoxides.