Gamlen Tableting has been added to the shortlist in the Innovation Award category of Medlink East Midlands’ Business Awards for 2011.

The company has been selected for its tableting press, which it says is the world's first benchtop, computer-controlled tablet machine.

Owner and developer, Dr Michael Gamlen, said the tablet machine (patent applied for) offers almost unlimited applications in the pharmaceutical industry, as well as having potential in the nuclear, medical diagnostics, ceramics and nanomolecular industries. 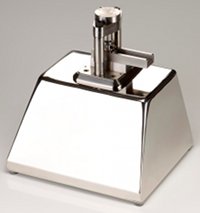 The Gamlen tableting press is a benchtop, computer-controlled tablet press

‘Its true value lies in its ability to make a compact under very tightly controlled conditions at a specified compaction pressure or thickness, a process that normally requires a large machine costing hundreds of thousands of pounds,’ he said.

The tableting press can be used to study repeated compaction events on the same sample. Gamlen says its high degree of control also produces tablets with better uniformity than is possible using a conventional tablet press.

The tableting press can be used to make small tablets and evaluate very small amounts of material (as little as 10mg) making it relevant for micro-tableting requirements. It can also be used to make multilayered tablets with the compression force for each layer being controlled independently. This facilitates the direct study of the effect of composition on layer binding properties, which is difficult using conventional equipment, Gamlen says.

The launch of the Gamlen tableting press was assisted by funding from the Bioscience iNet and with support from Medilink East Midlands and UK Trade and Investment.

The awards take place on 11 May at the East Midlands Conference Centre, Nottingham. Delegates at the Innovation Day Award Dinner will vote for the winners.