A powerful tool for the detection of counterfeit drugs

Drug formulation, an integral step in the regulated pharmaceutical industry, involves the careful blending and processing of precisely specified and measured components to create a final product that can be administered to deliver the required clinical dose.

The production of counterfeit drugs is a major challenge to the industry and has the potential to endanger health, threaten reputation and, in the long-term, reduce the funds needed to drive pharmaceutical innovation. Counterfeit products, although often packaged convincingly, may have specific components replaced or altogether removed, and/or additional components included.

Investigation of the composition of illegal drugs provides insight into their provenance to criminalists working in this area. However, it can be difficult to robustly detect and identify fake actives, contaminants and/or bulking agents, hampering efforts to investigate the associated crimes. Tracking down and halting counterfeiting operations is a substantial and complex activity and calls for highly effective analytical strategies.

Counterfeiting and its associated challenges

The production of counterfeit drugs is a growing concern for the pharmaceutical industry and affects a wide range of pharmaceutical products, from relatively inexpensive and high-volume generics, through to high-value drugs still under patent. Recipients are often duped by the near-identical appearance of the counterfeit to its genuine generic or innovator counterpart, which can make identification very difficult.

Although convincingly similar in external appearance, the components used to formulate counterfeits may differ substantially from those used to produce the original, and counterfeits are, of course, unregulated, creating a high risk of unexpected and potentially harmful outcomes for the individual. In this way, counterfeiting erodes confidence in the genuine product and also in its manufacturer.

Criminalists are increasingly interested in investigating counterfeit products, with the ultimate aim of identifying their source and eradicating them from the market. However, such investigations can present a complex challenge. The accurate identification and quantification of one or more individual components within a counterfeit pharmaceutical product can be difficult and often unreliable in the absence of appropriate technologies and methodologies.

The pharmacopoeial analyses specified to investigate falsified products are often expensive, and there is a call for simple alternatives that offer optimal sensitivity and specificity to maximise information flow at reasonable cost. During the investigation of counterfeit drugs, it is first and foremost the identification and quantification of actives, excipients and potential contaminants that is vital, as these studies determine the performance and therapeutic profile of the pharmaceutical product.

In counterfeit products, components are often less controlled in terms of quantity and particle size and shape distribution. Techniques that measure these metrics for individual components within a blend, with a high level of specificity, can therefore provide insight to help criminalists successfully penetrate the superficial appearance of a counterfeit drug and determine its source.

MDRS is a powerful technique that combines automated particle imaging with Raman spectroscopy to provide particle size, shape and chemical identification. These capabilities make MDRS a novel and valuable tool for the investigation of counterfeit pharmaceuticals and subsequent adjudications.

Automated particle imaging generates statistically significant particle size and shape distributions for a sample from images of individual particles, captured using advanced camera technology. Tens of thousands of particles can be imaged in a matter of minutes, making the technique substantially superior to microscopic methods, which are far more labour intensive and potentially subjective. In the investigation of counterfeit products, particle size and shape are important metrics as they can influence performance attributes such as reactivity and efficacy of delivery, and can provide clues to the processing provenance of a suspect material. That said, the true potential of particle size distribution measurements to provide valuable data in forensic science is yet to be fully explored.

Raman spectroscopy, which is a non-destructive, rapid, and reliable technique for determining the molecular chemistry of a substance, is routinely used in criminal investigations. It enables precise identification of the chemical identity of any active pharmaceutical ingredient (API) present, as well as any excipients. Amalgamating Raman spectroscopy with automated imaging provides enhanced insight into the physical and chemical properties of a blend by reliably and accurately differentiating morphologically similar substances.

Furthermore, because MDRS is applied to individual particles, it offers heightened sensitivity when compared with bulk Raman analysis. MDRS can identify small quantities of an API, even when a high volume of bulking agent is present. Comparing samples analysed using MDRS to a database of other known samples can offer insight into the provenance of the product. The following case studies illustrate the information that MDRS can efficiently generate; all measurements were made using a Morphologi G3-ID from Malvern Instruments.

Two OTC aspirin products were analysed using MDRS: one was a reference-labelled drug, the other a generic alternative. Samples of both products were dry dispersed using the automated operating procedures of the instrument and then characterised in terms of their particle size and shape distribution.

More than 1200 individual particles were uniformly selected across these distributions for analysis by Raman spectroscopy. Comparing individual particle spectra with the respective reference spectra for the active (aspirin) and the binder (starch) allowed the chemical identification of specific particle populations, and the generation of a particle size distribution specifically for the active in each product (Figure 1). 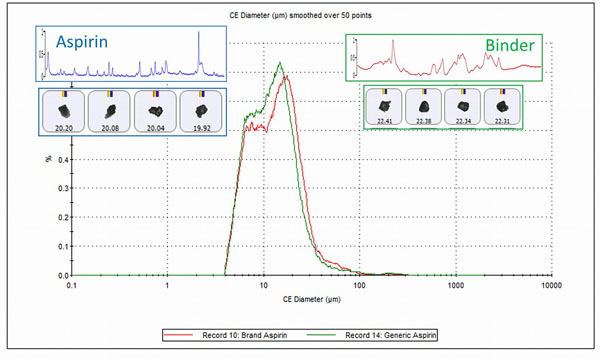 Figure 1: Overlay of the particle size distribution for aspirin confirms close similarity between the branded and generic products; particle images (inset) show that aspirin and binder cannot be differentiated on the basis of particle morphology alone, highlighting the value of MDRS for generating component-specific data

In this instance, the particle size distributions of the active in the branded and generic products were found to be very similar; if the brand were compared with a counterfeit pharmaceutical, the distributions may be expected to be much less closely aligned. Individual images of the binder and aspirin particles show that the components would be difficult to reliably differentiate on the basis of particle morphology alone, as they are of similar size and shape.

This example therefore highlights the value of the Raman data, which enables robust differentiation between the two components and the consequent generation of a particle size distribution specifically for the active. Should the branded product be compared with a counterfeit, these same spectra would enable the identification of any active substances and/or fillers present, with particle shape and size data providing complementary information to aid identification of the source.

In a second study, a powder-based drug, dextromethorphan hydrobromide (DXM), was contaminated at 999:1 (w:w) with baking soda to challenge the sensitivity of MDRS analysis. Traditional bulk Raman analysis of this mixture produced spectra of the DXM alone, and was thus unable to detect the baking soda ‘contaminant.’

The results of analysis by MDRS show that the particles are not distinguishable on the basis of morphology but can be robustly quantified with reference to library Raman spectra. The particles of the baking soda ‘contaminant’ were reproducibly chemically identified, even at this very low level (Figure 2), enabling the generation of a particle size distribution specifically for both DXM and baking soda, and an estimation of the amount of each present. 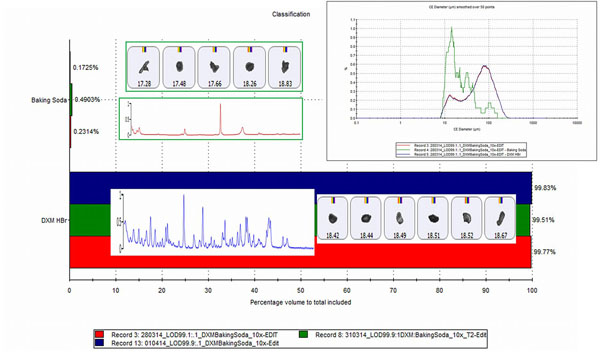 Figure 2: MDRS is sufficiently sensitive to detect and characterise baking soda present in DXM in a ratio of 1:999, enabling the generation of a particle size distribution for each component and an estimate of relative quantities present

Consequently, artificial sweeteners require a bulking agent or filler such as dextrose to increase the volume of the blend and to mitigate any undesirable taste resulting from the presence of the sweetening agent. Identification of the sweetening component in artificial sweeteners cannot be accomplished with bulk spectroscopic analysis because of its low concentration relative to the bulking agent.

To detect the active ingredient, manual microscopic particle picking must be done prior to Raman spectroscopic analysis, which is time consuming, subjective and requires significant skill. Thus, different brands of sweeteners cannot be rapidly differentiated by traditional non-destructive analytical techniques.

In this study, morphological data was collected for approximately 150,000 particles of sample A (saccharin/dextrose) and 100,000 particles of sample B (sucralose/dextrose). Following this analysis, particles with a circle equivalent diameter (CED) greater than 7.0µm were tagged for chemical identification using the instrument classification software. Particles with a 7.0µm CED were chosen for analysis for each sample for two reasons: (1) smaller than 7.0 µm included aggregate particles of both mixture components that produced spectral mixtures that were not identifiable and (2) the particle size distributions did not have a significant number of particles below 7.0µm CED.

Of these tagged particles, 3000 per sample analysed were targeted for Raman spectroscopy, to give a morphological and chemical analysis time of approximately 18 hours in total. Point spectra for each of the three components present (saccharin, sucralose and dextrose) were generated using pure samples of each. Comparing the gathered particle spectra against these reference spectra enabled the robust chemical classification of individual particles and the generation of particle size distributions for the specific component populations within each blend.

Scatterplots of the Raman spectra correlation scores for each sample show the two distinct populations present. A correlation value approaching 1 is indicative of a close match to the reference spectra for each component. Mid-range correlations therefore suggest the presence of a certain amount of aggregated material (Figure 3).

Figure 3: Scatter plots of the particle correlation values for samples A and B highlight the ability of Raman to reliably differentiate the two components present in the sweeteners

Particle size distribution data for the two samples shows that the particle size of the saccharin (data not shown) and sucralose (see Figure 4) is quite different from that of the bulk. 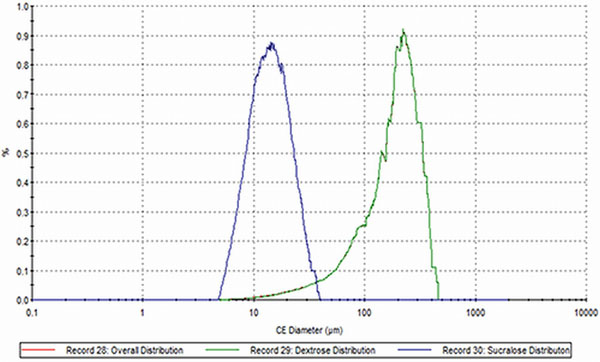 Figure 4: Particle size distribution data for individual components in the blend shows that sucralose is present as a much finer powder than the bulk dextrose; the dextrose distribution (green) is on top of the overall distribution (red), which reflects the fact that the majority of the mixture is composed of dextrose

In addition, as before, the specificity afforded by the MDRS technique enables the detection, differentiation and quantification of a very low level of sweetening agent in a high-volume bulking material in both samples (Figure 5), in a way that traditional bulk Raman analysis would not be able to achieve.

Figure 5: The high specificity of MDRS makes it possible to detect and quantify very low levels of sweetener in a blend

The growing prevalence and sophistication of counterfeit pharmaceuticals presents a growing challenge to the pharmaceutical industry, posing a direct threat to reputation, health and sustainability. Robustly identifying counterfeits can be difficult and accessing the information needed to trace the product back to its origin is often even more complex. Analytical techniques that deliver the necessary insight in a cost-efficient manner are therefore essential.

The combination of automated particle imaging and Raman spectroscopy makes MDRS a reliable and efficient tool for the investigation of counterfeit pharmaceuticals, and one that offers enhanced sensitivity to low level contaminants relative to bulk Raman spectroscopy.

MDRS allows criminalists to penetrate the superficial appearance of counterfeit drugs to reliably identify individual components within the product and gather both chemical and morphological data to establish their provenance. In this way, MDRS can provide the evidence needed to successfully prosecute counterfeiting operations and safeguard both industry and society against the threat to health and innovation that counterfeiting poses.