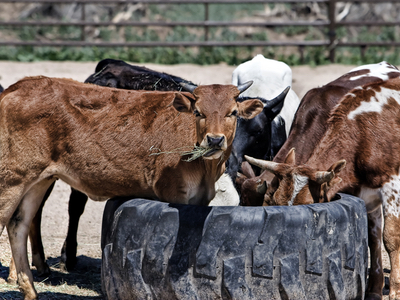 The use of antimicrobials in livestock is thought to increase antimicrobial resistance, leading to so-called "superbugs"


Antimicrobial resistance (AMR) is one of the world’s most pressing public health issues and the use of antimicrobials in animals contributes to this problem.

The European Medicines Agency (EMA) claims that it is crucial to limit their use to the minimum necessary to treat infectious diseases.

They believe that, other than in exceptional cases, antimicrobial to prevent diseases should be phased out in favour of alternative measures.

Successful strategies follow an integrated, multifaceted approach which takes into account the local livestock production system and involves all relevant stakeholders, from governments to farmers.

“It is clear that strategies that are already available can be implemented immediately and will have a positive impact on levels of antimicrobial resistance,” said EFSA’s Executive Director, Dr Bernhard Url.

“At the same time, there is a need for innovative solutions – we need to find alternative ways to prevent and treat bacterial infections in animals.”

Professor Guido Rasi, EMA’s Executive Director, said: “There are only a few new antibiotics in the development pipeline, hence those already available need to be used responsibly, both in humans and animals.

“Collecting data on AMR and antibiotic consumption is key to putting into place effective measures to control AMR and retain the effectiveness of antimicrobials for the benefit of public and animal health.”

Vaccines, probiotics, prebiotics, bacteriophages and organic acids are all possible alternatives to antimicrobials that improve animal health and reduce the need to use antimicrobials.

However, EMA feels that reducing the use of antimicrobials and finding alternatives is not enough; there is a need to re-think the livestock system completely.

The includes implementing farming practices that prevent the introduction and spread of the disease into farms. It would also include considering alternative farming systems which are viable with reduced use of antimicrobials. They said that education and awareness of AMR should be addressed to all levels of society, particularly to veterinarians and farmers.

In February 2017, EFSA and the European Centre for Disease Prevention and Control (ECDC) will publish their annual report on the levels of antimicrobial resistance in food, animals and humans across the EU.

EFSA, EMA and ECDC are also working on a report that assesses the link between consumption of antimicrobials and development of resistance in bacteria found in animals and humans. It is due to be published at the end of July 2017.

By the end of 2017, the three agencies will propose a list of indicators enabling risk managers to monitor the reduction of antimicrobial resistance and the use of antimicrobials in humans, food-producing animals and food.