Microneedles on a sticking-plaster-like patch may be the painless and safe way for doctors to test for drugs and some infections in the future, following research by scientists at Queen's University, Belfast.

The work has been supported by £300,000 in funding from the UK's Engineering and Physical Sciences Research Council (EPSRC).

Samples of the rough, absorbent patches are being tested in the Queen’s University Belfast laboratories of Dr Ryan Donnelly, a researcher in the School of Pharmacy. The experiments show that the forest of tiny polymer needles on the underside of the patch, when pressed into the skin, can absorb the fluid in the surface tissue, taking up at the same time the salts, fatty acids and other biological molecules found there.

'The important thing is that we typically find the same compounds in this interstitial fluid as you would find in the blood,' explained Donnelly. 'But, compared with drawing blood, our patches can get their samples in a minimally invasive way. And it’s far safer than using a conventional needle. These microneedles, once they have been used, become softened, so that there’s no danger of dirty needles transferring infection to another patient, or healthcare worker.' Two million healthcare workers are infected by needlestick injuries every year.

The microneedle sampling technique is a development of earlier and ongoing experiments using similar patches to deliver drugs and vaccines painlessly – the sensation when they are pressed onto the skin is a bit like the roughness of Velcro, said Donnelly.

The microneedles are made of polymer gel – similar to the material used in super-absorbent nappies. For their original, injecting function, they are pre-loaded with vaccine or drug compounds that will be released into the skin on contact with the interstitial fluid.

Compared with drawing blood, our patches can get their samples in a minimally invasive way

But the flow can go both ways, so that for the sampling variants, the backing material can be made chemically attractive to target compounds, encouraging them to diffuse into the gel with interstitial fluid drawn out of the skin and locking them in place for later analysis.

Dr Aaron Brady, a clinical pharmacist in Donnelly’s group, is currently conducting the first clinical evaluation of the technology using caffeine as a model drug. Eyman Eltayib, a PhD student with the group, is also trialling the technique for blood-free glucose sampling at her home university in Khartoum, Sudan. Future targets for sampling could include therapeutic drugs where monitoring the correct dose can be important.

'Theophylline, the asthma drug, is one compound doctors might want to track this way,' said Donnelly. 'It has a very narrow therapeutic range – too much and you can harm the patient, too little and it won’t do the job. During our EPSRC project, my PhD student Ester Caffarel-Salvador has shown theophylline in the blood of rats can be indirectly detected using our microneedles. In the future, patches could also be designed for medics treating TB, particularly in sub-Saharan Africa. Patients are very bad at completing their long courses of antibiotic treatment, the main cause of drug-resistant TB. A simple, cheap technique like this would let healthcare workers monitor compliance, even with a minimum of training.' 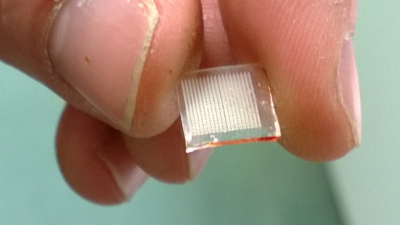 Real-time monitoring could be a realistic option in the future and might involve combining the microneedle technology with a simple laser-based detection called surface-enhanced Raman spectroscopy (SERS) of drug compounds inside the gel. The group already has proof-of-concept for this idea and is now looking to extend the range of drug concentrations that can be detected in this manner.

Electrochemical detection is another attractive possibility that might allow patients to use the technology in their own homes. If connected wirelessly to their healthcare provider, they could then have their medicines or doses changed based on the microneedle readings, both enhancing patient care and saving NHS resources.

In the future, patches could also be designed for medics treating TB, particularly in sub-Saharan Africa

'Premature babies have very limited blood volumes and are prone to bruising and scarring when blood samples are taken,' said Dr Caroline Johnston, Research Evaluation Manager at Action Medical Research for children. 'There is a real need for a safe, reliable and painless way to monitor these babies’ drug levels, and these microneedles are so far proving to have all the right characteristics.'

The group is currently in discussions with a major medical manufacturer with a view to producing prototype commercial devices, the first stage ahead of full clinical trials.