Nipro takes part in the Belgian Economic Mission to Japan

Nipro Japan hosted a conference on “Healthcare Technology from Flanders, Belgium” at Nipro’s Institute of Medical Practice (iMEP) in Japan on the recent Belgian Economic Mission in December 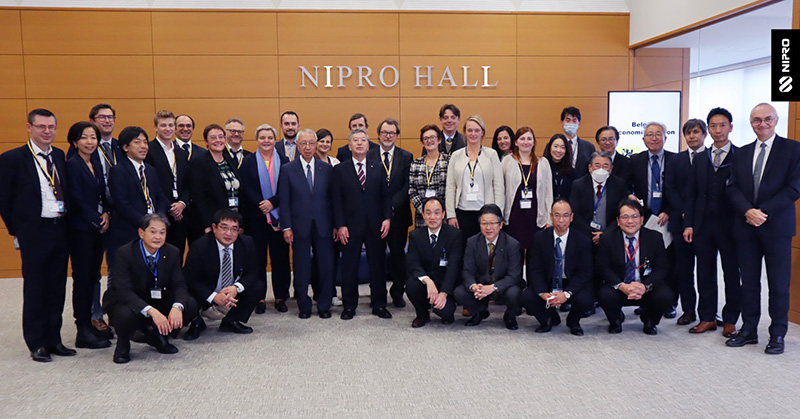 The conference was opened by Flanders Investment & Trade with a focus on Flanders’ life sciences industry – a perfect combination of biotech, pharma, and healthcare. Nipro fully believes in this – Nipro chose Belgium as the first country to establish a Nipro sales office outside Japan.

Furthermore, Nipro Belgium is located in Mechelen – a thriving city on the urban and industrial belt between the Belgian cities of Brussels and Antwerp.

“We are happy to host this conference on healthcare technology. Belgium has always been important to us - it is where we started our global expansion back in 1991. We look forward to continued growth and success together.” Nipro President, Yoshihiko Sano

Software and technology to advance healthcare and connect medical devices were other hot topics at the conference. Nipro is a firm believer in digitalisation - we have our own dialysis software development firm, Nipro Digital Technologies Europe (NDTE). Located in Bruges, NDTE is another Nipro business that is situated in Flanders, Belgium.

“Healthcare Education in Flanders” was another topic at the conference. Education is something that Nipro champions. Today, our iMEP branch at Mechelen - Nipro’s first training institute outside Japan - conducts both in-person and virtual training sessions for numerous healthcare professionals globally*.

The Belgian delegation who attended the conference at Nipro’s (iMEP) in Japan was led by Minister-President of the Government of Flanders, Jan Jambon. The conference was organised with the support of the Royal Belgian Embassy in Japan and Flanders Investment & Trade.

Nipro is honoured and humbled to have been chosen to host part of this successful Belgian Economic Mission to Japan.

*To date, over 3,000 healthcare professionals have followed training sessions at iMEP Mechelen