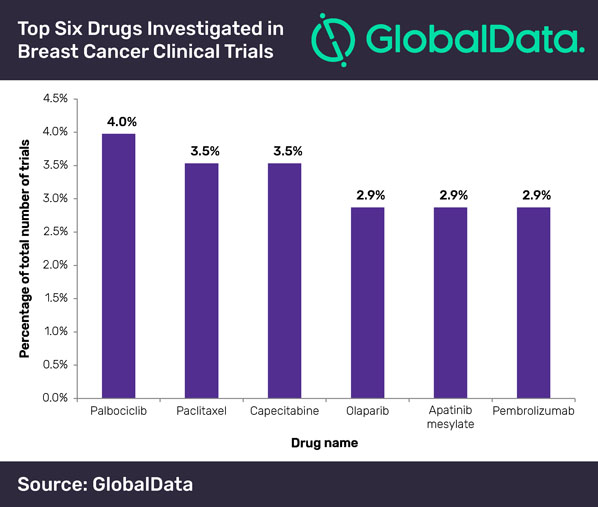 Accordingly, a substantial amount of research is geared towards investigating effective therapies.

Against this backdrop, Pfizer’s palbociclib–a cyclin-dependent kinase (CDK) inhibitor with high antineoplastic activity, emerged as the top drug used in 4% of breast cancer studies initiated in 2018, according to GlobalData, a leading data and analytics company.

The majority of clinical trials were in Phase II (50.8%), with non-industry sponsors taking the lead and accounting for 57.8% of trials.

China, with 10.6% of the total clinical trials, was second only to the US (22.4%) during the review period. Biomarkers were used in 22.7% of trials, with cytokine-related biomarkers being the most commonly researched (17%).

"Furthermore, all trials using the tyrosine kinase inhibitor apatinib mesylate were in Phases II or IV with locations only in China, while the majority of trials examining the antineoplastic immune-modulating agent pembrolizumab are being carried out in the US and do not span beyond Phase II.”