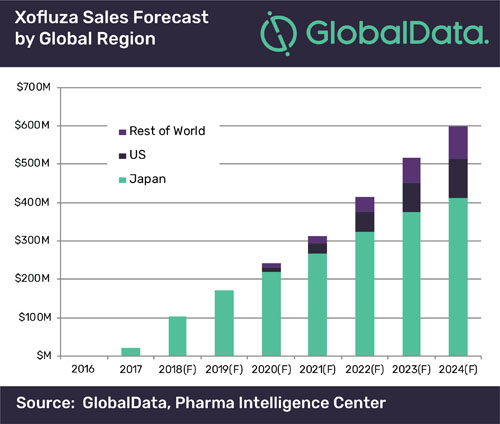 “Xofluza is forecast to reach annual sales of $600 million by 2024. Although the drug is on track to be marketed globally, the majority of these sales are expected to come from Japan, where brand loyalty to Shionogi, and a historical preference for branded products compared with generics, is expected to give the drug a boost over competitors."

“Xofluza’s major competitor in the flu market will be Tamiflu, also marketed by Roche. Although Xofluza offers an improved dosing regimen and some benefits in efficacy compared to Tamiflu, competition from recently launched generics is expected to hamper sales in the US and Europe."

“Yesterday’s results support previously published positive efficacy data from a separate Phase III trial enrolling lower risk influenza patients. Xofluza is currently being reviewed for approval by the FDA, and Roche will expect these results to be taken into consideration when deciding how the product will be indicated in the US.”

Xofluza is the first single-dose antiviral for the treatment of influenza, and has a novel mechanism-of-action.

The drug was developed by Shionogi, which has been marketing it in Japan since it launched in 2017. However, Shionogi have partnered with Roche to market the drug throughout the rest of the world.