The war in Syria has not only decimated the country’s healthcare infrastructure, but has also failed to benefit the pharma industry in the neighbouring countries coping with a refugee influx

With the conflict in Syria now in its fourth year, the pharmaceutical and healthcare sectors in the country have been decimated. While an estimated nine million people have been displaced, more than three million refugees have fled Syria to neighbouring Turkey, Lebanon, Jordan and Iraq, according to the United Nations High Commissioner for Refugees (UNHCR) office.

But the massive influx of refugees into these countries has yet to translate into higher demand for pharmaceuticals from local manufacturers or importers – even in Lebanon, which has refused to set up camps, preferring refugees to settle within established communities. This is primarily due to aid agencies and governments providing medicine to refugees, with tenders being sourced internationally, alongside requests for donations from pharma manufacturers.

In general, the conflict in Syria is having a negative effect on the region’s pharmaceutical manufacturers and importers alike, compounded by political instability and weak economic growth in Iraq, Yemen, Egypt and Libya. Indeed, according to World Bank figures, the economic effects of the ‘Arab Spring’ revolts on Egypt, Tunisia, Syria, Yemen, Libya, Jordan and Lebanon have caused estimated losses of US$168bn during 2011–2013, equivalent to 19% of these countries’ combined GDP.

In some countries, like Yemen, we lost all government sales in 2013 compared with the previous year

‘When looking at [pharma] sales volumes throughout the region, there were different levels of impact on private and government tenders from one country to another. Government ones were the most impacted in areas like oncology and therapies, leading (overall) to a 30–50% drop for us in sales, while with the private sector we have managed to alleviate the damage somewhat, but it is still down by 25–30%,’ said Samer Al-Ansari, Marketing Director for the Middle East and North Africa (MENA) at Hikma, one of the region’s leading pharmaceutical manufacturers and exporters, based in London and Jordan. ‘In some countries, like Yemen, we lost all government sales in 2013 compared with the previous year.’

Syria was not a major market for regional manufacturers, with local producers having met 90% of local demand prior to the conflict, which started in early 2011. While local production has dropped by up to 70%, according to the World Health Organization (WHO), with pharmaceutical plants damaged or closed, especially in northern Syria, this has not resulted in greater exports for regional producers. This is due to the difficulties of distribution, particularly in areas not under government control, while fluctuations in the Syrian currency complicate payments and financial guarantees, such as letters of credit.

Frequent border closures have also made transit of goods through Syria from Turkey and Lebanon to the rest of the region more complicated, while planes have been re-directed from Syrian airspace, adding on extra transportation time. According to Al-Ansari, it is not easy to deliver anything to Syria and on to Lebanon. The company is facing up to two hours of extra flight time to avoid Syrian territories, he said.

Jordan-based Hikma has faced discrimination in trying to access the Iraqi and Syrian markets due to Jordan’s governmental support of Syrian rebels. ‘The boycotts in Iraq and Syria have put constraints on our business,’ added Al-Ansari.

In Syria’s close neighbour Lebanon, more than a million Syrian refugees have been registered – in a country whose pre-crisis population was 4.5 million. The government has not allowed camps to be set up, so the refugees are dotted around the country. With healthcare predominately private practice in Lebanon, refugees are given assistance by non-governmental organisations (NGOs) and aid agencies. In a survey carried out by Médecins Sans Frontières (MSF) in December 2012, almost 15% of refugees could not afford the fees – up to 25% of the cost, with the rest covered by the UNHCR – while nine out of 10 interviewees said the price of prescription drugs was a barrier to accessing medical care.

Lebanese pharmaceutical producers and manufacturers told Manufacturing Chemist that the influx of refugees has not created extra demand for medicines in the $969m Lebanese market, according to US-based data provider IMS Health and Lebanese Pharmaceutical Importers Association (LPIA) figures. This is attributed to the aid agencies providing medicines, while pharmacists were not keeping track of sales to Syrians, making it hard statistically to gauge the impact of the refugees.

Armand Phares, President of the LPIA, has asked his members if there had been a rise in sales due to the Syrians, but all distributors consistently told him there had been ‘no impact’.

‘With the population increasing by over a quarter, there should have been an increase in turnover by 10–20%, but there has not been any special demand from the refugees because of the aid agencies, which are providing their own supplies,’ said Phares. ‘Individual sales are not reflected in sales as they cannot be identified,’ he added.

As far as the small local production sector is concerned – which accounts for only 8% of pharmaceutical products sold in the country – Lebanese pharmaceutical producer Pharmaline, part of the Malia Group, stated there had not been any effect, as did Algorithm, another Lebanese medicine maker. ‘There has been no impact on our products, as refugees take donations or buy from dispensaries, and we don’t sell to them. There are tenders from the UN, and that is it,’ said an Algorithm spokesperson.

That said, there was a rise in pharmaceutical imports in 2013, according to a report by Lebanon-based bank BankMed, stating that ‘mounting cases of Syrian refugees’ infections have increased demand for vaccine imports, where the value rose by 16.9% from $90.5m imported in the first nine months of 2012 to $10.5m in the same period in 2013’. As with other data, the report was not certain that any increases were due to the Syrian refugees. For instance, the value of imported vaccines and toxins rose by 12% in the same period, to $117.6m, which ‘may be attributed to the increased demand on vaccines by Syrian displaced nationals’, stated the report.

There is a similarly negative situation for Jordan’s pharma sector regarding the influx of refugees. While many here are in camps, there are also refugees living within the community, making assessments complex. Indeed, for Lebanon, Turkey, Jordan and Iraq, 65% of Syrian refugees live outside the camps, according to the UNHCR.

In Jordan (pre-crisis population 6.4 million), there are now an estimated 1.2 million refugees, more than 100,000 of whom live in the giant Za’atari camp. The rise in refugees and the negative impact on the Jordanian economy has, similar to in Lebanon, not resulted in extra sales, with aid agencies not sourcing most tenders locally. 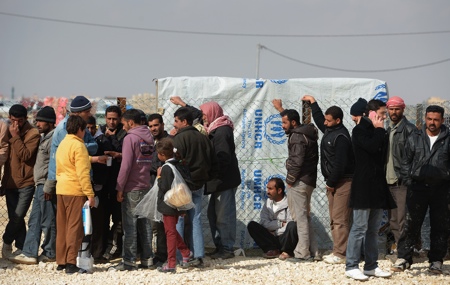 Refugees from Syria collect food and supplies from the UNHCR as they arrive at the Za’atari refugee camp in Mafrq, Jordan

‘There were some small tenders, with lower prices, but there have not been the tenders to the degree that you would expect. With more than one million refugees, which represents one fourth of the population, we are not feeling that demand in the market has increased, and that is clearly demonstrated in total sales. What is surprising is that the total Jordan market is stagnant, and as the market leader we feel that. The impact of refugees has not helped because sales are through third parties and with low prices,’ said Al-Ansari.

While aid agencies are providing medicines, they have also reached out to manufacturers for donations. ‘Most companies now give donations, and Hikma is with all [its] medicines: cardiovascular, respiratory, antibiotics, and specialised treatments, like our oncology line, plus injectables,’ added Al-Ansari.

Turkey, by contrast, is a much more populous country (75 million) and hence better able to cope with the refugee influx. According to the UNHCR, as of October, there are an estimated 1.5 million refugees in the country, with around 220,000 in camps. Alongside aid agencies, the Turkish government is footing the bill for medicine through its Social Security Institution (Sosyal Güvenlik Kurumu), which is the main health system financier and principle purchaser of healthcare services. In January 2013, a Cabinet decree allowed Syrians to be treated free of charge at public hospitals, and in October, identity cards were issued to Syrians to access government services.

As in Jordan and Lebanon, there are no statistics on whether demand has risen for medicines because of the influx of Syrians. ‘There is demand from that side, although there are not any numbers,’ said Turgut Tokgöz, Secretary General of the Pharmaceutical Manufacturers Association of Turkey (IEIS). ‘Domestic sales are big enough that we would recognise a surge in terms of volume per capita just based on demand from refugees. But the government covers quite a bit of the cost of pharmaceutical expenses.’

Ankara has allocated extra funding to meet the healthcare needs of Syrian refugees. ‘Some 80% of local consumption is met by Turkish producers,’ added Tokgöz.

As elsewhere, manufacturers are being called on for donations, and have had minimal tenders from aid agencies. ‘We have had regular calls from the Turkish authorities to donate drugs, and we actively call on our members to do so. We have also been approached by some international organisations to build a network between us and members to supply some medicines, such as basic pharmaceuticals, which they are having a hard time accessing,’ added Tokgöz.

While the domestic market has not been significantly affected by the refugees, exports have risen, in part due to regional instability, he said: up by 18.2% in 2013 on 2012, according to the Turkish Statistical Institute (TUIK – TurkStat), to $818m.

‘The conflict in the area has had an impact for some time. Iraq and Iran are our number one and two export markets, but I don’t know for Syria. We have had some complaints about parallel trade given the low price of many goods in Turkey, which might be traded around the border areas of Syria and Iraq where prices may be higher,’ said Tokgöz.

Ultimately, the impact of the Syrian refugees on the MENA pharmaceutical sector might be better assessed in the near future once data is collected. In the meantime, aid agencies continue to request more funds to cater to the needs of the refugees, with the UNHCR estimating that $384.4m is required for healthcare as part of its $3.74bn 2014 regional response plan.