Cholangiocarcinoma is a rare and aggressive cancer of the bile ducts, occurring both within and outside the liver. Survival rates are poor, not least because the majority of patients will have advanced disease by the time they are diagnosed 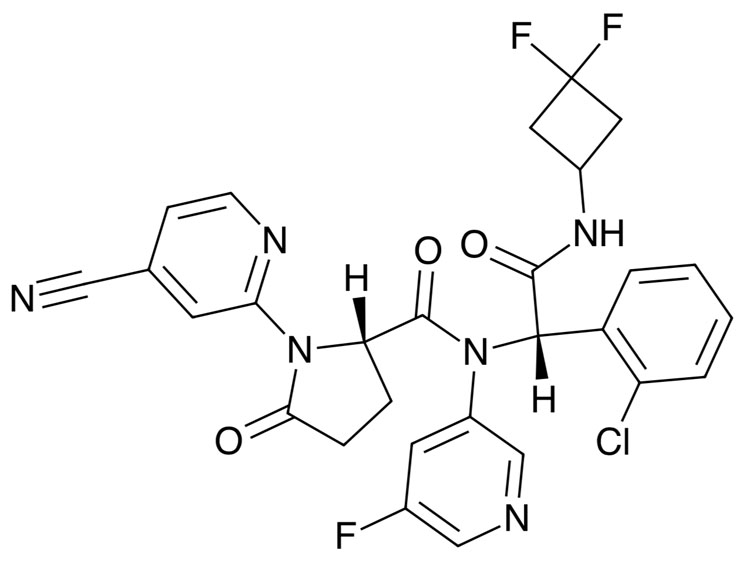 Treatment relies on standard chemotherapy regimens, notably cisplatin plus gemcitabine, and oxaliplatin plus 5-fluorouracil. However, thanks to genetic profiling of the tumour, several potential targets, including isocitrate dehydrogenase-1 (IDH1), have been identified.

Mutations in IDH1 are thought to be present in up to 20% of cholangiocarcinomas and 13% of cases when it is intrahepatic. Therefore, drugs that target IDH1 may have potential. One such drug, ivosidenib, was developed by Agios Pharmaceuticals (which was acquired by Servier in 2020) for acute myeloid leukaemia.1 It is an orally available reversible inhibitor of mutant IDH1.

In a Phase I dose escalation and expansion study of ivosidenib as a monotherapy in metastatic IDH1 mutated solid tumours, pretreated patients — 73 of whom had cholangiocarcinoma — were given daily oral doses of 200–1200 mg in 28-day continuous cycles.2

The 500 mg dose was selected for expansion; no dose limiting toxicities were seen and the maximum tolerated dose was not reached. The most common adverse events were fatigue, nausea, diarrhoea, abdominal pain, decreased appetite and vomiting.

Grade 3 or worse adverse events included ascites and anaemia in a small number of patients. Two patients died, but neither as a result of ivosidenib treatment. Median progression-free survival was 3.8 months; 40% survived progression-free for 6 months and 22% for 12 months.

A Phase III study has also been done.3 In the multicentre, randomised, double-blind, placebo-controlled trial, 185 adult patients with histologically confirmed advanced IDH1 mutant cholangiocarcinoma who had progressed on previous therapy were randomised to receive 500 mg of ivosidenib or a placebo once a day in continuous 28-day cycles; patients could crossover from the placebo to ivosidenib on radiological progression.

The primary endpoint, progression-free survival, was a median of 2.7 months with ivosidenib, compared with 1.4 months with the placebo. The most common grade 3 or above adverse event in both groups was ascites at 7% in each group. There were no treatment-related deaths.

It is also being investigated in another difficult cancer, glioma. In 68 patients with advanced gliomas in the above Phase I trial, there were no dose limiting toxicities and the maximum tolerated dose was not reached.4

The objective response rate in the 35 patients with non-enhancing glioma was 2.9%, with one partial response.

Thirty achieved stable disease, compared with 14 of the 31 with enhancing glioma. Median progression-free survival was 13.6 months and 1.4 months, respectively. An exploratory analysis showed that the drug reduced both the volume and growth rates of non-enhancing gliomas.