Lymphomas are blood cancers that develop from lymphocytes and there are several forms, some of which are more aggressive than others. Follicular lymphoma, for example, is a B-cell cancer that originates from centrocytes and centroblasts. Although it is often treatable, it all too frequently relapses and there is a significant unmet medical need 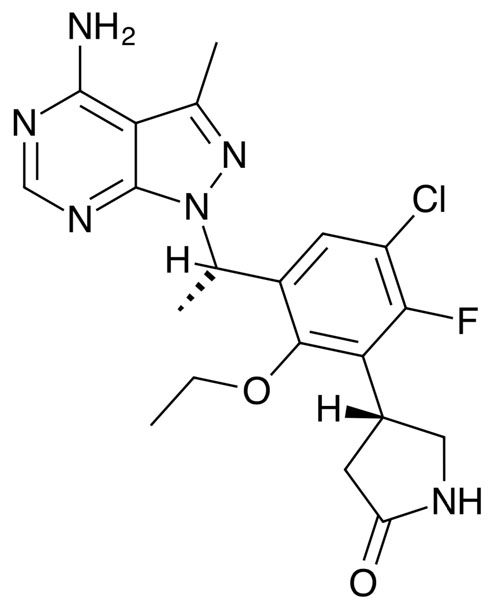 A potential new treatment for various forms of non-Hodgkin lymphoma, including follicular, marginal zone and mantle cell lymphomas, is being developed by Incyte, with Chinese development rights licensed to Suzhou-based Innovent. Parsaclisib is a selective oral inhibitor of phosphatidylinositol 3-kinase delta (PI3Kδ).1

Intermittent dosing at 20 mg once a week was also studied. Two patients died of unrelated causes. The objective responses to the monotherapy were 71% in follicular lymphoma, 78% in marginal zone lymphoma, 67% in mantle cell lymphoma and 30% in diffuse large B-cell lymphoma. It was well tolerated.

Early data from an ongoing pivotal Phase II trial in China have been reported.3 Patients with relapsed or refractory follicular lymphoma who had received at least one prior therapy were given daily 20 mg doses of the drug for 8 weeks, followed by 2.5 mg daily doses until disease progression, intolerable adverse events or other withdrawal occurred. At the data cut-off point, 36 patients had been treated and five had discontinued because of disease progression.

The median treatment time was 104 days and 24 of the patients were evaluable for response. The objective response rate was 92%, whereas the complete response rate was 17%. The median duration of response was not reached among the responders. Safety wise, the most common adverse events were reductions in neutrophil, white blood cell and platelet counts, and anaemia. One patient died, although this was not considered to be treatment-related.

Phase II results have also been reported in diffuse large B-cell lymphoma.4 In an open label trial, 60 patients with relapsed or refractory disease were given 20 mg oral doses for 8 weeks, with ongoing weekly doses at the same level while the patient continued to benefit from it.

For those 55 patients who had not previously been given BTK inhibitor therapy, there were eight complete and six partial metabolic responses, with a median duration of response of 6 months. In the pretreated five patients, there was one complete metabolic response. Adverse events were manageable.