A design of experiments approach to optimising APIs

Drug manufacturers continually look for ways to improve the quality, efficiency and cost-effectiveness of their processes while maintaining robustness and compliance. Numerous factors can influence the performance of a given process, and continuous improvement is a critical aspect of modern API manufacture. Traditionally, researchers have examined the effects of each variable in an experiment by changing one factor at a time, e.g. changing the temperature or concentration of a single chemical, while holding the other variables constant. More recently, there has been growing interest in the use of statistical modelling and computer simulation of experiments that enable rapid, low-cost predictive models for process improvements as well as providing valuable data about interactions among process variables.

Ninety years ago, Sir Ronald Fisher proposed that ‘large and complex experiments have a much higher efficiency than simple ones’1 and he demonstrated the design of an agricultural experiment that would simultaneously examine the effects of three different parameters on crop yield. He argued that this approach would not only be more efficient in identifying the effects of different soil treatments on crops – involving substantially less time, labour and land than ‘single question’ methods – but that it would also allow for analysis of all possible interactions among the experimental parameters, as well as delivering more accurate results. This early paper was an important advance that described the first DoE model.

The approach offers a powerful way to optimise various operating parameters to achieve the desired reaction outcome, without having to test each variable independently

Various DoE software packages are now available for non-statisticians to use and, for chemical processes in particular, the approach offers a powerful way to optimise various operating parameters to achieve the desired reaction outcome, without having to test each variable independently. Over the past 10–15 years drug researchers have shown increasing interest in applying DoE in three key areas. First, in screening studies scientists can input numerous variables into DoE modelling software to determine which factors have the greatest impact on outcomes.2 DoE is a rapid and efficient way to screen multiple variables in parallel rather than testing one factor at a time (OFAT), as Fisher predicted.1

Second, DoE is used widely for optimisation, where the important factors identified through screening can be examined in more detail to find performance improvements. For example, DoE could be used to predict the optimal concentrations or temperatures that should be used to achieve the desired yield, purity or cycle time of a process. DoE also provides valuable insight into interactions among these variables, enabling researchers to understand better the effects of the variables on their process, as well as identify the optimal values for all variables in combination.2

A recent example is the use of DoE to develop a more efficient catalytic manufacturing process for epoxide 1, a key intermediate used in the production of atazanavir. Traditional approaches to producing epoxide 1 have typically suffered from low selectivity and/or low throughput, so DoE was used to develop and optimise a new, biocatalytic approach that produces epoxide 1 in high throughput yield, and with excellent chiral selectivity and purity.3 The study showed that using DoE also uncovered a synergistic effect between two key variables in the process: changing both the pH and the amount of IPA in the reaction medium simultaneously resulted in considerably greater conversion of substrate to the product than would be achieved through changing one factor at a time.

Elsewhere, there has been growing interest in the use of DoE for optimising formulation development. It can be used to find more robust formulation processes and in some cases can provide important understanding of protein stabilisation and behaviour.4

Elsewhere, there has been growing interest in the use of DoE for optimising formulation development

More recently, process developers and drug manufacturers have begun to use response surface methodology (RSM) with DoE to further explore the relationships among the variables in an experiment and their effects on the experimental output (response). Having established the significant variables, RSM applies further statistical modelling, such as central composite design, to build a predictive model of the response. Importantly for regulated manufacturing environments, it can provide valuable information for risk-based assessment of manufacturing processes, and can be adopted to identify the amount of variability that can be tolerated within the process.5,6

DoE and RSM are being used increasingly as part of quality by design (QbD) initiatives, where critical quality attributes (CQAs) and critical process parameters (CPPs) can be assessed via DoE to optimise the process robustness.7

DoE can also be used to shape the QbD strategy at earlier stages, such as to establish a risk-based relationship between CQAs and CPPs during failure mode and effect analysis.8

Screening, optimisation and RSM analysis for improved oncology drug synthesis: All three of these DoE applications were recently applied to define the optimal and highest quality process for synthesising a highly potent oncology drug. An initial OFAT screening without the use of DoE identified three factors that would affect the yield, improving it from 79% to 95% (Table 1).

DoE was then used in an optimisation study to find the most effective concentrations of these three factors in the process in terms of influence on the yield and HPLC purity of the desired product (Figure 1). A three-factor, full factorial study design was used (StatEase Design Expert software), with upper and lower range limits specified for each factor and centre points (median values) to monitor reproducibility of the data. The study showed that varying these three factors would result in quantitative yields ranging from 58% to 101%, and that increasing the amounts of NaCl and KOH would increase the yield. These variables had little effect on the purity, which remained high (ranging from 99.84 to 99.89% AUC, see Table 2). 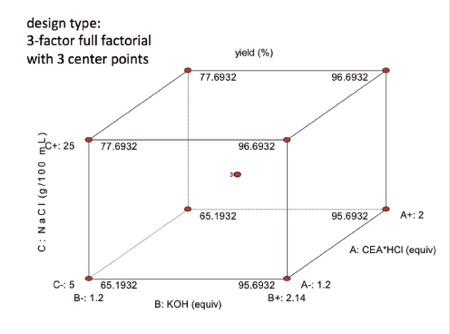 Response surface methodology was then applied for further optimisation of the process and, as shown in Figure 2a, it predicted that increasing the inputs of NaCl and KOH would increase the yield but only to a certain extent i.e. the response was not linear but curved. Further statistical analysis was carried out using central composite design to predict the curved response surface (Figure 2b) and a contour plot (Figure 2c); these modelling tools generated a new equation for the three variables that would result in the best reaction yield, without affecting the purity. Importantly, this approach also identified acceptable tolerance ranges for the manufacturing process: it was shown that if these parameters were to vary by up to 25%, the process would still deliver 90% yield, suggesting a very robust process. 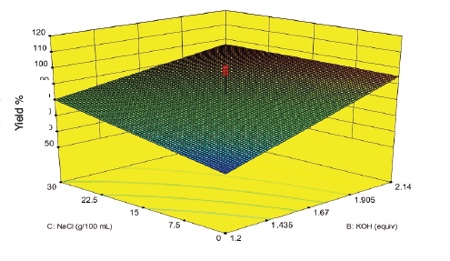 Figure 2a: DoE study surface. A visual representation of the reaction space, where the yield is predicted relative to the input values of the three factors of interest; the colour indications represent the acceptability of the response, ranging from red (good) to blue (poor). It can be seen that the yield does not meet the centre points (red circles) at any point, meaning that the surface must be curved 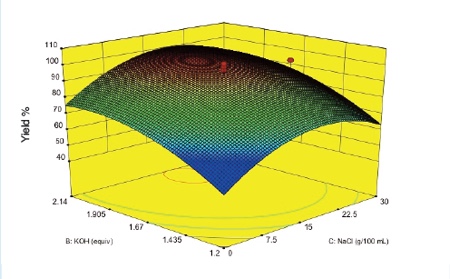 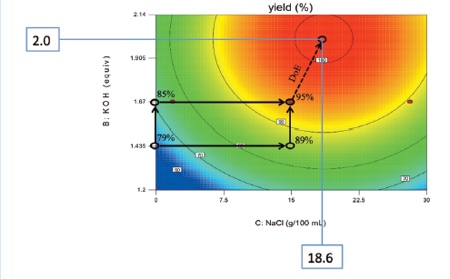 Applying DoE to optimise analytical method development: DoE has potential application in almost any process for examining how variation in the inputs can affect the outputs; a relatively untested example is analytical method development. During pharmaceutical manufacturing, analytical development is typically carried out in a regulated environment, so it is important to develop a robust method that will result in a high quality, accurate, clear separation and quantification. The outcome can be greatly affected by inputs such as the ratio of the solvents used in the mobile phase, buffer concentration, the column size, flow rate, temperature and more.

Johnson Matthey Fine Chemicals recently applied DoE to optimise the chromatography conditions of an analytical method for monitoring the purity of a compound (4302.E). Four variables were identified and simultaneously analysed during the optimisation process: the percentage of trifluoroacetic acid (TFA; modifier) in the mobile phase, the column temperature and the flow rate. Their effects on the chromatographic responses were observed, including improvements in the resolution between the peak of the main compound (4302.E) and related substances, resolution between related substances, and the tailing of the main peak. It was found that varying the four conditions in this model would influence the amount of peak tailing and that resolution could also be improved by adjusting the concentration in the mobile phases. 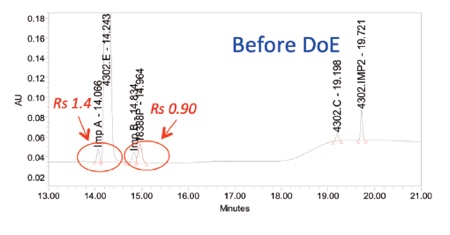 Figure 3a: HPLC chromatograms demonstrating the improvements in peak resolution obtained through application of DoE 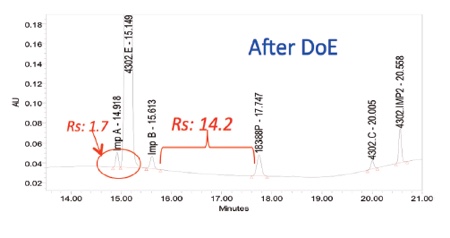 The analytical method was shown to be improved considerably by applying DoE to optimise the four variables (Figure 3a), including improvements in the peak shape (less tailing) through using a lower column temperature and flow rate (Figure 3b) and better resolutions between the compounds of interest and impurities A and B through lower buffer concentrations. The study also showed that the resolution between the main peak and impurity B was not affected by changing the conditions. 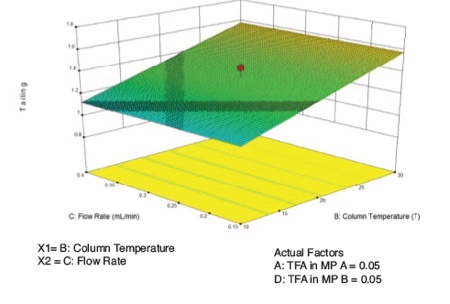 This improved separation allows more accurate measurement of the peaks of interest as well as providing valuable information about the effect of different experimental conditions on the analytical method. DoE could be further applied in this example to examine the robustness of the method and identify the degree of variability in temperature, flow rate or buffer concentrations that could be tolerated while still producing high-quality chromatographs and a robust analytical method.

In conclusion, DoE offers a powerful, efficient and intelligent approach to improving chemical and analytical processes through predictive modelling. Its advantages extend beyond accelerating the experimentation and screening stages of R&D, to offer valuable insights into how parameters interact to affect the outcomes and robustness of a process. DoE can also help manufacturers to improve the safety and quality of their pharmaceutical ingredients.

The author would like to acknowledge the research carried out by Vadims Dvornikovs, Jeremy Wilt, Lavanya Kokkula and Beata Musial.