A green path to high potency

Pfizer’s Freiburg site was named ISPE Facility of the Year in the Sustainability category for 2011. The site has been transformed into a modern, eco-friendly building using innovative and sustainable technologies, making use of geo-thermal heating and cooling and solar panels; Europe’s biggest wood-pellet boiler powers the plant’s air conditioning system via steam power. The high potency area offers dry compaction, wet granulation, bead coating, melt extrusion, external lubrication and compression scale-up, as well as process optimisation, registration of the product and clinical supplies.

Pfizer’s Freiburg site, used by Pfizer CentreSource for contract manufacturing was named ISPE Facility of the Year in the Sustainability category for 2011. Susan Birks visited this flagship plant in Germany to find out how it fits into the CMO’s growing service portfolio.

Pfizer is no stranger to International Society of Pharmaceutical Engineers (ISPE) accolades. In October 2008, the NewCon facility at Illertissen, Germany was voted overall winner of the Facility of the Year Award (FOYA) for its high level of automation and lean techniques. The plant has expert competence in occupational exposure band (OEB) 4/5 manufacturing and incorporated numerous best practice innovations.

The FOYA sustainability award for the Freiburg plant in 2011 is indicative of excellence in reducing the carbon footprint and the environmental impact of operations while maintaining the same dedication to lean operating techniques. This is especially difficult for companies with constrained, high energy processes, such as high potency drug manufacture, and even more so when trying to maintain a very flexible operation, as is required for today’s contract manufacturing market.

Pfizer CentreSource (PCS), the contract manufacturing business of Pfizer Global Supply, has an enviable legacy of experience to draw upon to benefit its external customers, given Pfizer’s heritage in high containment. But no matter how big or established, every company has to adapt to the changing marketplace and become more competitive. With this in mind, the company has identified new services that it can offer, such as providing an end-to-end service for high potency drug manufacture – a growth area for the pharma market.

From Pfizer’s two high potency drug product manufacturing plants in Germany – Illertissen and Freiburg – as well as a site in Ascoli, Italy, PCS now offers a complete range of contract manufacturing services, including analytical, technical, regulatory, development, manufacturing and packaging support. The company leverages the synergy of high containment development activities at Freiburg and can move customer products to commercial volumes at Illertissen and Ascoli.

The facility in Illertissen, expanded in 2006 to accommodate demand for the smoking cessation drug varenicline (Chantix in the US, and Champix elsewhere), focuses on high volume manufacturing of drugs once they have been approved for market.

This groundbreaking plant moved away from the previous approach of relying on personal protective equipment to a completely contained and automated operation for OEB manufacturing at the commercial scale. The plant has an innovative layout, using a ‘cell concept’ rather than the traditional modular design of manufacturing facilties. Its automated production processes are all run remotely and use the latest process visualisation, manufacturing execution systems (MES), masterbatch recording and electronic batch recording (EBR).

The Freiburg site caters for the production of new drugs prior to marketing approval and launch. The volumes are thus smaller than at Illertissen. As an oral dosage ‘launch site’, it handles some 300 new product SKUs per year and produces approximately 2,000 presentations for 150 countries. Production volume in 2010 was 3.7bn tablets/capsules, equating to 230m packs annually. This figure is expected to have risen to 250m by the end of 2011 – equating to approximately 1m packs per day.

The Freiburg site has been transformed from a 1950s-era facility into a modern, eco-friendly building using innovative and sustainable technologies. According to the FOYA judging panel, the Freiburg plant ‘encompassed the engineering of a long-term sustainability programme that is unparalleled in pharmaceutical manufacturing’. 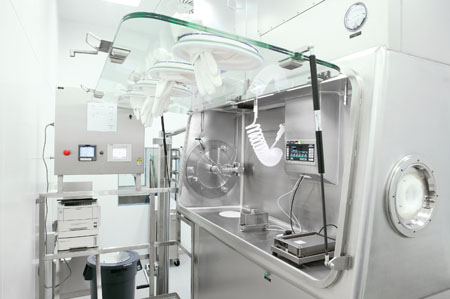 A weighing isolator for dispensing HAPIs

The main environmental innovations include:

‘As a result, some 93% of total plant energy is generated from renewable energies,’ says Dr Bernd Schümmelfeder, in charge of business development with the Product and Process Development (PPD) team, ‘and we hope to increase this to 95% in time’. Not only does the plant make use of geothermal heating and cooling and solar panels, it also has Europe’s biggest wood-pellet boiler, which powers the plant’s air conditioning system via steam power.

The introduction of computer integrated manufacturing systems, green technologies and state-of-the-art manufacturing concepts, combined with PAT, have also resulted in a 15% reduction of production costs at the Freiburg site. But the other feature making the Freiburg operation successful is the involvement of every department in streamlining and removing inefficiencies.

For example, the 70-strong PPD team works at three different scales: lab (<5kg), pilot (up to 150kg) and manufacturing (up to 750kg). By ensuring that the same type and brands of equipment are used across the Freiburg site (but for different volumes), scale-up from one department to the next is faster and smoother – ‘critical when dealing with very short timelines,’ adds Schümmelfeder.

NNE pharmaplan was the main contractor used in designing the DevCon facility in Freiburg, which handles the development of new potent compounds at five OEB levels. ‘The plant had to be highly flexible in production terms as every project is unique,’ says Schümmelfeder.

The 35,000ft2 facility is laid out in a block with a central corridor that provides access to several gowning rooms on both sides, which in turn allow access to seven production cubicles – four on one side and three on the other. This enables the facility to run two or more products at one time. All room scheduling is computerised and 100,000m3 of air per hour is moved through the facility.

The high potency area offers a portfolio of services for dry product development, such as dry compaction, wet granulation, bead coating, melt extrusion, external lubrication and compression scale-up, as well as process optimisation, registration of the product and clinical supplies. 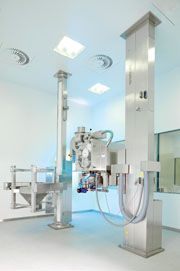 Kaisen operational excellence principles are evident throughout the manufacturing and packaging areas. ‘Co-location of product and process development (PPD) and the launch site ensures close collaboration and smooth transfer,’ says Schümmelfeder. Both departments use the same QA systems, which also helps. PPD and packaging are also highly integrated. The aim is to achieve seamless transfer through development and clinical trials to launch, all out of one site.

The facility also incorporates in-line process and analytical techniques (PAT) to look at issues of blend homogeneity and potency. Because much of the analytical work is done during development, the company can be ready to release product in a matter of days after FDA approval. ‘If the product is for the US market, for example, the drug can be in the US two days after approval,’ says Schümmelfeder.

Innovative technologies and automation are a key feature of the Freiburg plant. Automated guided vehicles are used in the packaging area and robots are used in the fully automated high-rise warehouse (a ‘lights off’ operation). MLR, a German group specialising in automating material flows and logistics in facilities, handled the automation of the warehouse and SimPlan, a leading German simulation services provider, made the simulation plan for the plant’s many packaging lines.

The contained packaging lines are set out in linear runs with intervention by employees reduced as far as possible. They are designed for flexible volume and fast changeover, as volume requirements are decreasing throughout the healthcare market. The facility carries out some 9,000 changeovers a year and has managed to bring changeover times down to two hours for the majority of operations.

Operational excellence is also run in the labs and offices. The labs for the 120 QA/QC staff and the 30 or so working on new products were renovated in 2007 and are designed so that people can walk through the seating/desk areas and talk – so as not to create ‘silos’.

Creative thinking is important at Freiburg, and at PCS, which benefits from a Pfizer-wide innovation scheme that encourages employees to come up with revenue creation ideas. As a result, it is already branching out from its traditional offering into new areas such as API development, cold chain logistics, bio-processing, chromatography services and much more. 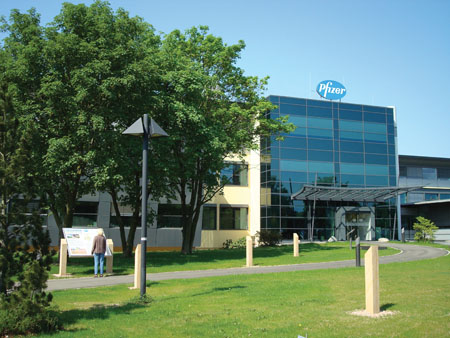