A microfluidic approach to production of alginate beads for cell encapsulation

Gurinder Vinner, Material Scientist at Dolomite Microfluidics, discusses the benefits of continuous microfluidic production for the encapsulation of mammalian cells with no loss of viability 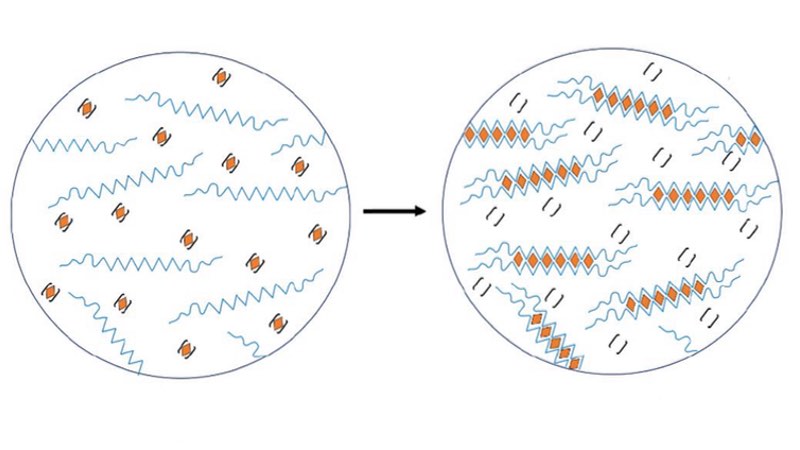 Alginate is used for a plethora of biomedical science and engineering applications that require biologically and chemically inert polymers, such as the encapsulation of drugs or cells. Traditionally, alginate beads have been manufactured using batch techniques, but this is not without its challenges. This article describes the benefits of continuous microfluidic production of alginate beads, and the encapsulation of mammalian cells with no loss of viability.

The most abundant marine biopolymer, Alginate has proved popular for a range of applications that require inert biomaterials, as it is readily available, inexpensive, biocompatible and biodegradable with low toxicity.

Typically extracted from seaweed, this anionic polysaccharide (a block copolymer composed of 1,4’-β-d-mannuronic acid and α-l-guluronic acid residues) has structural similarities to extracellular matrices of living tissues, making it a model system for mammalian cell culture and tissue engineering. Its mild gelation requirements — using ionic cross-linking with a divalent cation, for instance, Ca2+ — mean that alginate is also suitable for applications employing delicate active agents, such as proteins.

Today, alginate hydrogels are widely used for a variety of pharmaceutical and biomedical applications. Active pharmaceutical ingredients — from small molecule drugs to macromolecular proteins — can be encapsulated in alginate gels to create orally administered or injectable therapeutics offering more controlled release, while minimising degradation or denaturation.

The porous nature of alginate also offers a suitable environment for cell growth, allowing easy exchange of nutrients and gases via the nanopores in the bead structure. Alginate gels, therefore, have potential applications as micro-bioreactors in tissue engineering, where cell transplantation can be used to generate new tissues or organs for patients suffering from a wide range of conditions. In these cases, the hydrogels used for cell delivery provide an environment for new tissue formation, and control the structure and function of the engineered tissue.

Alginate hydrogels are widely used for a variety of pharmaceutical and biomedical applications, even APIs

Alginate is also incorporated into wound dressings, where it helps to maintain a physiologically moist microenvironment and minimise bacterial infection at the wound site to encourage wound healing.

Regardless of the application, controlled and reproducible generation of the alginate gel beads is crucial. This is commonly achieved by extrusion, whereby a solution of alginate is extruded through a needle into a calcium chloride bath, producing ionically cross-linked alginate beads (Figure 1). The drawback of this technique is that it generates large beads that can be several hundred micrometres in diameter, with a wide size distribution and minimal control over bead size. The beads are also non-spherical and inclined to coalesce.

In addition, the reproducibility and throughput of this method is low, creating a need for alternative techniques with better control over the production process, enhanced reproducibility and higher throughput. One such approach, that has seen significant recent growth, is microfluidic synthesis (Figure 1).

Microfluidic technologies allow the manipulation of liquids, gases, droplets, cells and particles within micro-channel geometries, and have the ability to create three-dimensional flow patterns that achieve controlled mixing of both miscible and immiscible fluids. Droplet-based microfluidic systems have shown numerous advantages for the synthesis of monomer- or polymer-containing hydrogel droplets formed by various chemical methods.

Careful design of the microfluidic chip geometry at the interface between the liquid droplets and the carrier fluid allows precise control of bead formation, making it possible to rapidly produce particles with well-defined sizes, shapes and morphologies. The resulting droplets are then stabilised using surfactants to prevent coagulation and separation. 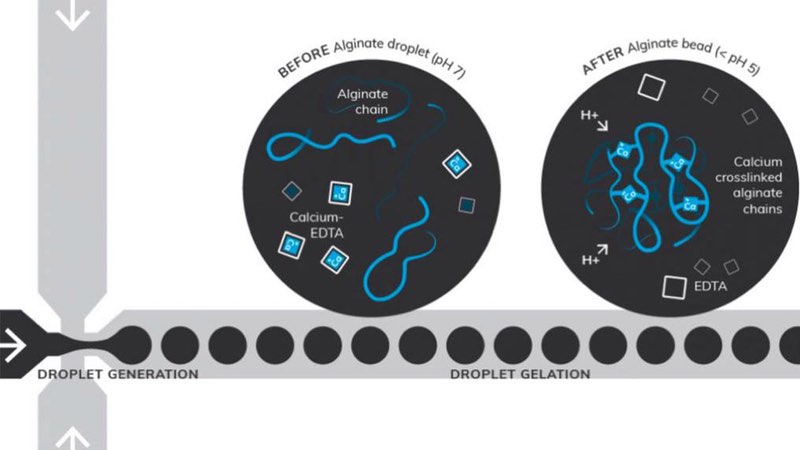 Figure 2 illustrates how a flow-focusing microfluidic approach can be used for the synthesis of cross-linked alginate chains using calcium-EDTA. Acetic acid was used to lower the pH during the collection phase, with the calcium-EDTA complex dissociating and releasing Ca2+ ions that cross-link the alginate chains during droplet gelation.

A recent application note1 describes the encapsulation of mammalian cells in alginate beads. Cells were encapsulated in 2 % (w/v) alginate, and their viability was assessed using calcein dye to visualise live cells. Various flow conditions were tested by altering flow rates of both the dispersed and continuous phases to optimise the droplet and bead sizes while maintaining biocompatibility. 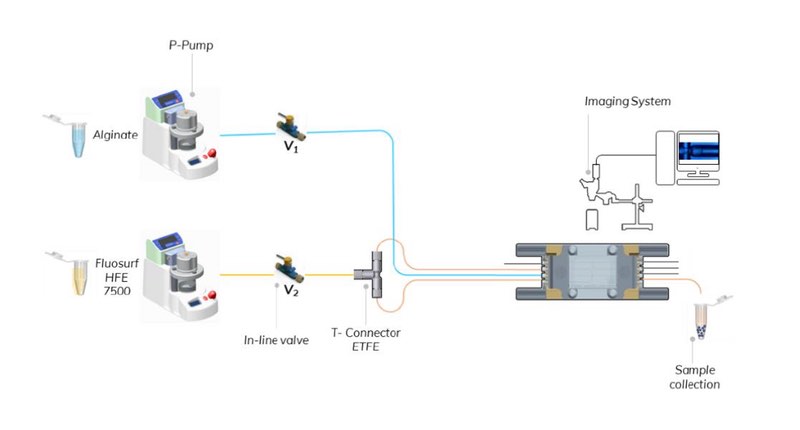 The continuous phase was delivered through the two lateral inlets of the microfluidic chip via a T-connector, and droplet formation was visualised using a high-speed digital microscope. The experimental set-up is shown in Figure 3.

Alginate droplets were formed using 1 % v/v FluoSurf in HFE 7500 (Dolomite Microfluidics) as the continuous phase and 2 % w/v alginate in 0.1 M calcium-EDTA (Sigma Aldrich) as the dispersed phase, collecting the product in a solution of the continuous phase containing 0.05 % v/v acetic acid (Figure 4).

The flow rate was slowly increased until the desired drop size was achieved.

Fluoro-Stop (Dolomite Microfluidics) was added to the emulsion and mixed after a two-minute cross-linking time (Figure 5). Following phase separation, the beads were isolated and washed with PBS solution to eliminate any traces of oil and, finally, suspended in PBS for imaging. 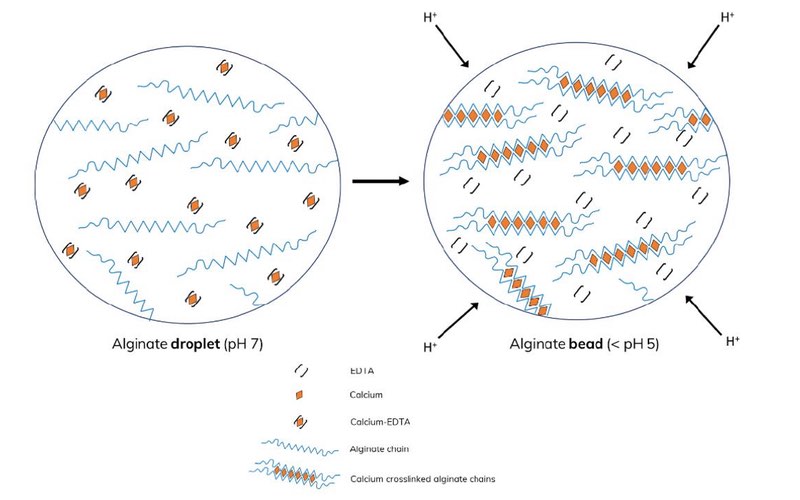 The optimum conditions for stable production of droplets in the microfluidic chip were determined using 2 % w/v alginate, as this concentration is commonly used for biomedical applications, and is approximately the upper limit at which beads can be successfully generated without encountering problems due to viscosity, such as jetting. Lower concentrations – 0.05 and 1% w/v – have also been successfully tested (results not shown).

The highest production rate without jetting was achieved using flow rates of 20 μl/min for both the continuous and dispersed phases, generating droplets of ~113 μm and beads of ~119 μm in diameter. The post-gelation beads were soft and retained their spherical shape when compressed between two glass slides without external force.

Once the optimum conditions for the production of monodispersed beads had been determined, the focus changed to cell encapsulation. Calcein-dyed mammalian cells – NIH/3T3 (ATCC CRL-1658) and HEK-293 (ATCC CRL-1573™) – pelleted in PBS were resuspended in 2 % w/v alginate with 0.1 M calcium-EDTA at a working concentration of 106 cells/ml.

Alginate beads were then generated, washed and resuspended in PBS as described above. Calcein staining allowed the impact of alginate on cell viability to be assessed using a microscope with a fluorescent filter.

Suspension in alginate prior to encapsulation did not affect cell viability (Figure 6 left), and live cells were clearly visible in the alginate beads post encapsulation and washing (Figure 6 middle/right).

Alginate beads are an excellent choice for encapsulation of cells, proteins and other sensitive active agents, due to the relatively mild gelation conditions required. Whatever the application, controlled, reproducible generation of the alginate gel is vital.

The microfluidic approach offers many advantages over conventional batch methods, including continuous, reliable and reproducible generation of monodispersed droplets with real-time process control. As a result, more and more scientists are making the transition from batch production to microfluidic synthesis, a trend that is set to continue.