The IMA ZERO project has yielded a ground-breaking innovation: the world’s first all-electric flow wrapper.  By replacing energy-intensive pneumatic applications with highly efficient linear actuators on the new Delta WW OF-HSX, IMA ILAPAK’s engineers have succeeded in designing a flow wrapper that uses on average 37% less power than a conventional machine. Users of this revolutionary full-electric flow wrapping platform can expect to see a return on their investment within 18 months (at today’s prices) through a combination of energy savings and improved performance.

Sustainability has long been a priority and fundamental value at IMA, prompting the launch of the IMA ZERO sustainable development programme in 2019. This group-wide sustainability initiative, coupled with rising costs faced by all manufacturing sectors, provided the context for the development of the new all-electric flow wrapper.

Tony McDonald, Sales and Marketing Director at ILAPAK UK, says: “From conversations with our customers it is clear that rising costs are their number one concern. All manufacturing sectors are facing crippling input costs and pressure to reduce their environmental footprint. Our new all-electric flow wrapper responds directly to both of these challenges. The beauty of this proposition is that the savings and payback can be projected with a high degree of accuracy. And for the majority of mid to high-speed flow wrapping applications, the calculations provide a very compelling case for investing in this platform.”

On the new Delta WW OF-HSX, the most energy-intensive pneumatically driven functions - pressing, gusseting and cutting - are electrically driven. This has eliminated the use of compressed air from these applications, resulting in a massive 94.5% reduction in the amount of energy required for air usage. As an example, on a 170ppm line operating two-shifts per day for 300 days a year, the Delta WW OF-HSX consumes just 1500kWh compared with 27,400kWh for a conventional flow wrapper to perform these applications.

Non-energy intensive functions remain pneumatically actuated, as the cost of replacing the pneumatic cylinders with electric components would not be justified by the minimal energy savings accrued. To this end, the Delta WW OF-HSX has a small on-board high efficiency compressor, eliminating the need for an external compressed air source. 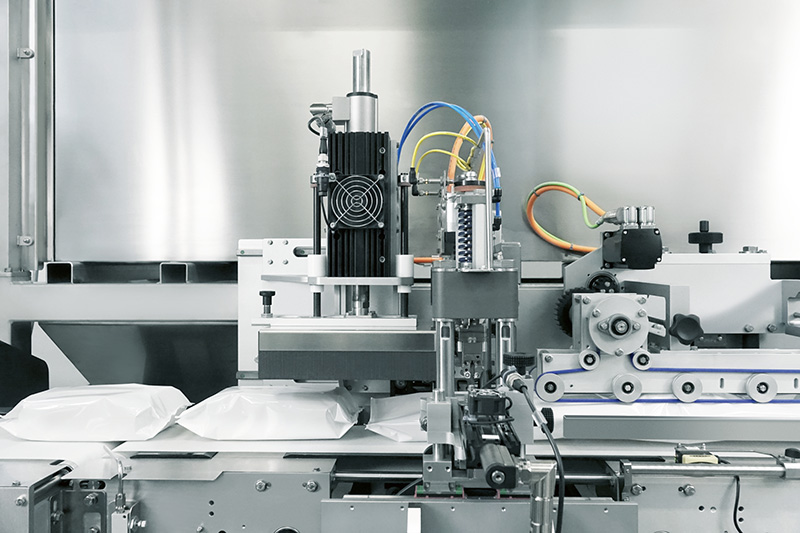 Users of this revolutionary full-electric flow wrapping platform can expect to see a return on their investment within 18 months.

The full-electric platform also makes a considerable difference to the machine’s overall performance and efficiency - the speed limitations of a standard flow wrapper stem from the pneumatic response, which starts to become unreliable at speeds of above 120 cycles per minute. The Delta WW OF-HSX, by contrast, runs comfortably at 170ppm, which is over 40% faster than its conventional counterpart. Changeover times are also reduced as no mechanical or manual adjustment is needed. By operating at a higher speed, the flow wrapper uses less energy to produce the equivalent volume.

The flow wrapper’s performance isn’t just enhanced in terms of speed, but also in terms of the quality of the pack that is produced. Thanks to the electrical actuators, the machine’s movements are precision controlled - giving greater repeatability and accuracy over operations such as gusseting and film cutting.

The cumulative effect of the efficiencies afforded by the full-electric flow wrapper is a total energy saving of 37% versus an equivalent conventional machine. In comparative testing, over one year (300 days of two-shift production), the energy consumption of the electric machine was calculated at 43,000 kWh compared with 69,500 kWh for a conventional machine. When the higher capital cost is taken into account, the electric machine will pay for itself in less than 18 months.

Nicola Ragno, R&D and Technical Director for IMA ILAPAK, says: “This has been one of the most exciting projects to come out of IMA’s Sustainable Development Programme, and we are looking forward to presenting this to the marketplace. When we set out on this journey to build an all-electric machine, we knew that switching to electric actuators would reduce energy usage but we weren’t sure whether the costs of an all-electric platform would be recouped through the savings. The solution that we have ended up with has surpassed our expectations in terms of how quickly it pays back through reduced energy consumption and improved performance - and interestingly, the higher the operating speed, the shorter the payback period.”

All Delta 6000 OF (Open Frame) machines can be upgraded to the all-electric platform.