When Brenntag, a global market leader in chemical distribution, needed to replace its effluent monitoring and batch control systems, it turned to Bürkert for the complete solution. The equipment was reaching the end of its life and was in need of replacement and improvement at the same time; a task that required expert knowledge of both design and installation. The result was a more efficient plant which complied with local water authority requirements as well as a recommendation to repeat the design at another facility.

For a company involved in chemical storage, manufacture and distribution, the relationship with the local water authority is understandably well established. Brenntag is required to provide regular pH and flow readings for its discharge of effluent, however this had become a very time consuming and inefficient exercise. As a company that takes its responsibilities to the environment very seriously, Brenntag decided that a new system was required that would provide automatic pH readings, pH adjustments and flow readings - all of which could be logged and reported to the local water authority.

Furthermore, possible improvements were also identified with the batch control systems for producing sodium hypochlorite, sodium hydroxide and hydrochloric acid. These systems also needed to be replaced with a design that improved efficiency and productivity. The entire project was awarded to Bürkert Fluid Control Systems; as a leading manufacturer of measuring and control systems; it was ideally placed to provide a turnkey solution.

Originally, the effluent plant on site had to be visited twice a day by an engineer to manually measure the pH as well as the tank levels. Once these readings had been established, the engineer had to determine how much hydrochloric acid or sodium hydroxide, caustic soda, to add to the tanks to balance the pH readings. This was a very time consuming exercise and far from being efficient. In addition, the local water authority was also looking to improve the monitoring and recording of discharge levels, which would require further support from the onsite engineer if the original equipment was maintained.

Having made the initial site visit to establish the scope of the project and established the design criteria, Bürkert designed a complete system which included pH sensors and level sensors in the tanks as well as on/off valves for the chemical dosing equipment and flow sensors on the discharge pipe work. This was all controlled by a bespoke, custom built panel which included a PLC and HMI. The control system was specifically designed for Brenntag and the software specially written to meet the client specifications.

Once the designs had been finalised, the installation process could begin. Working closely with the site maintenance team, Bürkert was able to install the new equipment without disrupting the production process and also ensuring that all the necessary records for the local water authority were maintained. This did entail some out of hours working, but the end result was an updated and improved control system, which incorporated the latest design and components to ensure long service life. 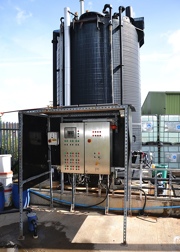 As a leading manufacturer of measuring and control systems, Burkert was ideally placed to provide a turnkey solution

Once commissioned, the finished control panel continuously monitors the pH readings and records them along with the discharge flow rate. If an adjustment to the pH reading is required, the dosing pumps are activated and the calculated amount of chemical added to the tank, based on the tank level and the required pH reading. The overall effect has transformed the effluent plant into a very efficient process which also exceeds the requirements of the local water authority.

The second part of the project was to improve the serviceability of the sodium hypochlorite plant. The chemical is used in bleach as a disinfectant as well as in water treatment. The HMI in the original system was old and out of date, which was causing production problems, so Bürkert was asked to develop a new control system, which did not include a vulnerable HMI.

Bürkert has considerable experience in batch control solutions and also has the unique ability to combine process and laboratory automation, valve elements, sensors, flowmeters, water treatment systems and networked communications into single source, customised systems that deliver higher process efficiency. The final design, based on information from the client, uses flow sensors and diaphragm valves, again controlled by a custom built panel. The new system now allows the operator to select the pre-set volume to allow automatic filling of sodium hypochlorite. The completed installation has improved production efficiency and reliability.