CRISPR in clinical trials: the future of gene editing 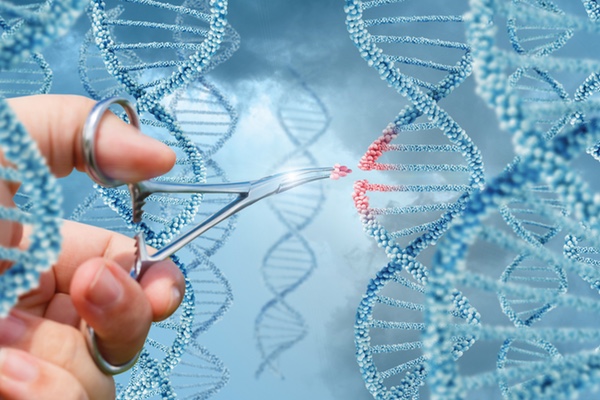 Gene therapy is a relatively new concept. Considering that the idea was only first introduced in a tangible way in 1990, the possibility of actual gene therapies has seemingly catapulted during the last 30 years. This is because of the breakthrough innovation of gene editing. Whereas early gene therapy was focused on adding genes to treat rare genetic disorders, gene editing promises to treat a much more expansive therapeutic array. Gene editing could potentially be the cure for an incredible range of illness — from HIV to cancer — and could even serve as an injection for high cholesterol.1,2 Of course, this makes complete sense; if you can target and change the DNA inside cells, all systems are affected.

Gene editing technology is currently being explored in disease prevention or treatment. For the most part, it has been applied largely via cells and in animal models.3,4 The use of gene editing in single cell conditions such as sickle cell disease, cystic fibrosis, haemophilia and more complex diseases such as mental illness, heart disease, HIV and cancer, might prove to be the next forefront in medicine.

The promise of this therapy is magnified by CRISPR-Cas9, which stands for “clustered regularly interspaced short palindromic repeats and CRISPR-associated protein 9.”3 The technology is not only less expensive than other gene editing treatments, it is also more effective, accurate and efficacious, which has all worked to contribute to the much-deserved buzz around it in the scientific community at large. CRISPR-Cas9 was developed from a genome editing system that takes place naturally in bacteria. These bacteria are able to sequester pieces of genetic information, or DNA, from viruses threatening the bacteria. This captured DNA is then used by the bacteria to create DNA segments, which are called CRISPR arrays. If the same virus attacks the bacteria again, the bacteria will harness the CRISPR arrays and produce RNA segments that target the DNA of the attacking virus. The bacteria are essentially able to remember all viruses and similar viruses. Using the Cas9 or a related enzyme, the bacteria is able to destroy the DNA of the virus, literally cutting it apart. This renders the virus inoperative and non-viable.3

When applied in a lab scenario, the technology works similarly to these bacteria. To harness the technology, scientists process a segment of RNA with a guiding sequence, which will bind to a specific, targeted DNA sequence present within a genome. As with the bacteria, this altered RNA further attaches to the Cas9 enzyme and is able to target the particular DNA sequence within the genome and, as with the bacteria, cuts it. After the DNA has been cut, the cell, which has a natural ability to heal, is harnessed by scientists for repair. Scientists are then able to add to or edit out genetic information within the DNA sequence. The option to alter the DNA further by replacing an already existent segment with a customised sequence is also possible.3

Prior to CRISPR, which was developed in 2012, the first successful gene editing trial took place in 2009. After an HIV-positive patient received a bone marrow transplant and was pronounced cured of the disease, scientists realised that the donor had a protein called CCR5, which blocks the virus from entering the cell.5 Although seeking donors with this mutation is not possible on a large scale, scientists realised they could harness this protein and disable it using what was known as “zinc finger proteins” or “molecular scissors.” Sangamo Therapeutics, a San Diego based genome editing company, tested the technology and produced a positive result in mouse models.5

However, it was not until October of 2016 that the first clinical CRISPR trial began in China. The trial disabled the PD-1 gene in the immune system of individuals with cancer using CRISPR. The edited cells were then reinjected into the individual’s body. The PD-1 protein codes for an “off” switch on the cell’s surface; the cancer takes advantage of the lack of immune response, which allows for infiltration of the mutation. However, with the edited immune cells, the switch was disabled, leaving the cancer unable to penetrate the cell.6 This trial poses a risk, as immune cells, when left “on,” might pose a threat to healthy cells by potentially attacking them. The trial will continue through 2018.1 Ten patients are currently enrolled in the trial and each will receive a total of up to four injections of the altered immune cells, with the PD-1 gene removed. The Phase I study, which is based in Sichuan University, will chronicle response rates and survival in those who have been diagnosed with non-small cell lung cancer.7

The market for gene editing and CRISPR is beginning to enter a boom-like phase, as companies push forward to become the first to launch a breakthrough. More than 20 trials will begin, or are currently taking place, and the majority of these trials are happening in China.1 Although the Sichuan University PD-1 trial start time was slightly delayed because of setbacks associated with developing the genetically altered cells — it took longer than originally anticipated — the trial did kick off.7 And whereas China’s CRISPR trial has begun prior to any trials in the US, the University of Pennsylvania received permission from the US National Institutes of Health to begin a trial on 18 patients who are suffering from a variety of cancers, including myeloma, sarcoma and melanoma.

Not only will these patients have their PD-1 protein removed from their T cells, with the modified cell implanted back into their bodies, but genetic material will be added to these altered cells.7 In addition to removing the gene that codes for the PD-1 protein, T cells will have the receptor for NY-ESO-1 added. This receptor is a protein, located on certain tumours. The hope is that the trial presents a double threat to cancer cells, both eliminating the PD-1 protein so the cancer can no longer spread, and instead trigger an immune response, but also, with the help of the receptor, the T cells should theoretically be able to attack and destroy any tumour that expresses the NY-ESO-1 protein.7

As both the US and China try to best each other in the gene editing space, there have been comparisons with this turning into the proverbial “race to the moon.” Yet, in a technological race, there are no losers. Carl June, who led the University of Pennsylvania study and specialises in immunotherapy, commented on the friendly rivalry. Speaking to Nature in November 2016, he said: “I think this is going to trigger Sputnik 2.0, a biomedical duel on progress between China and the United States, which is important, as competition usually improves the end product.”

The next clinical trial for CRISPR is taking place in China, proving that this is a global and borderless phenomenon, but, as of now, the West trails the East. Trials thus far have altered genes outside of the body and been injected back in, but now researchers are attempting to target HPV expressing cells while they’re inside the body.1 Taking place at the First Affiliated Hospital, Sun Yat-Sen University, the trial will study the effects of TALEN and CRISPR/Cas9 plasmid dosing for 3–6 months. There is a scheduled start date of 15 January 2018, with a predicted study completion date of 15 January 2019. The study will monitor TALEN, a plasmid in gel that will be administered twice a week during the course of 4 weeks. The TALEN gel comprises “TALEN plasmid, C32-447, Poloxmer 407 and distilled water as a solvent. CRISPR/Cas9 gel consists of a CRISPR/Cas9 plasmid, C32-447, Poloxmer 407 and distilled water as a solvent,” according to the trial submission.9

In this breakthrough trial, CRISPR technology will be applied directly to the cervix. CRISPR machinery to do this is not intended to affect the DNA of regular, normally functioning cells at all, but to target any cells that have been infected by HPV by wiping out any of these viral genes, and thus preventing them from becoming cancerous.1 As animals do not become infected by HPV in the same way humans do, these experiments will be less predictable than they might ordinarily be. Also, there is always a further risk that this type of experimentation could potentially lead to an alternative mutation.1

There is no end in sight to trials involving CRISPR, whether taking place inside or outside the body. In the US, there are three trials on the horizon, which will add genes to the cells in the liver. This is for the treatment of haemophilia B, and Hurler and Hunter syndromes using zinc finger nucleases.1 The promise of CRISPR to target cancer cells is being expanded on. If immune cells can be modified sufficiently, they can seek out and destroy tumour cells, which has created the CAR-T cell buzz. As with the University of Pennsylvania trial, PD-1, along with another gene, will potentially be edited to further the efficacy of the treatment.1

In March, FDA approved the use of UCART19 in humans to treat aggressive leukemia.10 This is the next momentum for clinical trials, with four under way in a move towards CRISPR and away from the older gene editing technology. One trial is expected in the UK, at University College London, two are planned in China and one in the US.

The future of CRISPR

The potential of CRISPR/Cas9 for disease treatment is immeasurable. Of course, the process is challenging and incredibly risky, especially if the wrong DNA sequence is targeted, or a mutation is introduced that leads to cancer. However, this is merely speculation at this point, as no abnormalities have been expressed when altered T cells are created in a culture. As CRISPR can take mere weeks, the ability for fast treatment is ever more encouraging and exciting; as an example, the TALEN method can take years to develop specific therapies. If CRISPR methods are approved and applied successfully, creating more T cell therapies will be not only faster but also more cost effective.11

There is much on the horizon for CRISPR gene editing techniques and trials; there’s no telling where the therapy will take us during the course of the next 100 years and well into the coming centuries. As gene editing can be a germ line therapy as well, there is potential that diseases will not only be eradicated completely, but that all genes can ultimately be modified. Although ethical concerns have been discussed regarding the implementation of such technologies, it seems that cures for genetic diseases might be possible as the vast potential of this incredible technology progresses further with every trial.4

Slow and steady
The growth of immuno-oncology: active, passive and hybrid treatments into 2020
The contract development and manufacturing pulse is steady and strong
Becoming bioavailable
Move toward cell-based manufacturing signals opening in vaccine market
Can epi-drugs capture the next wave of growth?
The future of uniquely delivered drugs and ADCs
Expanding trial data demands new analytical methods
Optimising excipients to improve bioavailability
Outsourcing: What does the future hold?
Outsourcing goes from strength to strength
Healthy growth despite stiff competition
Reaping the benefits of a continuous process
Suiting a strategy to fit biotech behaviours