Cell-penetrating peptides (CPPs) as a delivery system for oligonucleotides

The leading CDMO in peptides and oligonucleotides manufacturing, Bachem, has started building a new future for oligonucleotides: solving the industry’s main challenges around capacity, sustainability and cost-effectiveness 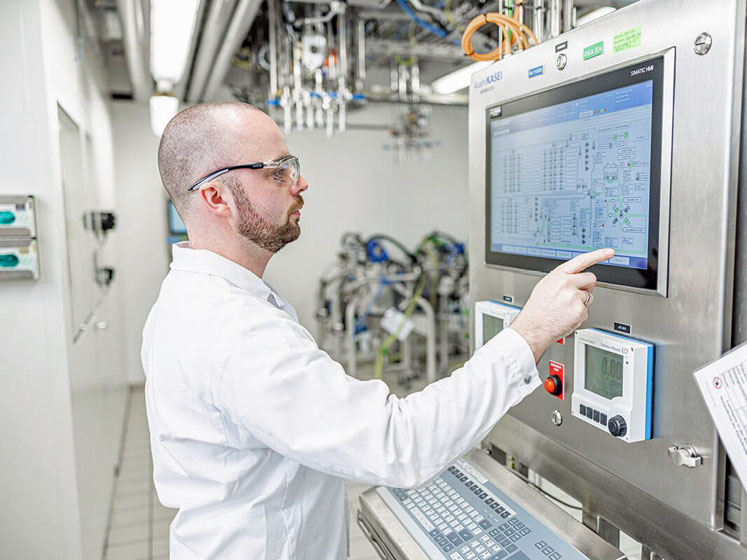 Emerging as a new treatment option in rare and orphan disease areas, oligonucleotide therapeutics have matured into a drug class with a broad indication spectrum.

The promise of oligonucleotides making a difference to an increasing number of patients is driving Bachem’s rapid implementation of manufacturing capabilities and capacities for oligonucleotide-based APIs.

Oligonucleotides act on the RNA level through different molecular pathways, but there is a major drawback when using them as drugs: their poor bioavailability and cellular uptake. These considerations limit their application as therapeutics.

To address these problems, it’s vital to develop delivery systems that enable oligonucleotides to reach their targets: cell-penetrating peptides (CPPs) present a potential solution to this issue.

What are cell-penetrating peptides? CPPs are short peptides that can translocate cargo molecules across cell membranes. These peptides typically contain up to 30 amino acids and can be cationic, amphipathic or both.

With time, a range of different CPPs has been developed, including natural translocating proteins through to newly designed computer-prediction sequences.

How are cell-penetrating peptides used? When using a CPP as a delivery system, it must first be conjugated to its cargo molecule and internalised through endocytosis.

Ensuring that the CPP can escape this endosomal compartment is crucial for its bioavailability and bioactivity properties.

How are cell-penetrating peptides conjugated to oligonucleotides? There are two vectorisation strategies which can be used for CPPs: covalent conjugation and nanoparticle formation.

To form a covalent linkage between the CPP and its cargo molecule, thiol-maleimide coupling is used. This is a common reaction within peptide chemistry and it has been approved by regulatory authorities for various antibody-drug conjugates.

Bachem has spent time studying and researching this reaction, along with the side-reactions that happen during the coupling stage.

However, this method does come with one major drawback. As CPPs are positively charged and oligonucleotides are negatively charged, they can be prone to aggregation, which can sometimes lead to precipitation of the conjugate.

By contrast, the nanoparticle formation approach is based on electrostatic and hydrophobic interactions between the CPP and its cargo. This method is generally used to deliver small interfering RNA (siRNA), but it can also be used for larger oligonucleotides too.

Unfortunately, the particles formed though this method are unstable in physiological fluids. To overcome this challenge, the CPP will need to be chemically modified.

Currently, only a small number of CPP-based oligonucleotide delivery examples have been reported for in vivo application. The table below includes some of these examples.

In a recent publication from scientists at the University of Bordeaux, a CPP-based nanoparticles approach was reportedly used to deliver siRNA into cancer cells of solid tumours.

In a second publication by the scientists at Bordeaux, CPP-based nanoparticles were applied as a vector for an anti-miRNA (AMO). AMO are used to neutralise microRNA (miRNA), which are short complementary sequences involved in the suppression of the translation process.

CPP-AMO nanoparticles can also be used for tumour imaging, where the major component is a PepFect peptide that encapsulates the AMO labelled by a radiotracer.

cRGD-oligonucleotide conjugates have also been used in past examples, opening up doors to further opportunities. The cRGD (cyclic(arginine-glycine-aspartic)) peptide is commonly used to target αvβ3 integrin receptors, which are involved in angiogenesis and tumour metastasis.

In one example of a CPP-oligonucleotide conjugate, a derivative of cRGD peptide, cyclo(Arg-Gly-Asp-d-Phe-Lys[PEG-MAL]) (MAL: maleimide), was covalently conjugated to a siRNA. Plus, in numerous in vitro experiments, the conjugate has been able to specifically enter αvβ3 positive human cells and silence the targeted genes.

The promising cRGD-siRNA conjugate has also been injected into tumour-bearing mice, proving to be well tolerated and resulting in a significant reduction of the tumour volume. This example makes clear the potential that cRGD-oligonucleotides have as anti-tumour therapeutics.

In a final example, glucagon-like peptide-1 receptor (GLP1R) was used as a vector for delivering antisense oligonucleotides (ASOs). Originally, GLP1R was viewed as unsuitable for selective drug delivery, due to its low abundance and restricted ability to internalise a large amount of drug conjugate.

Despite this drawback, in 2018, researchers reported a new approach which utilised GLP1R as an internalisation inducer for delivering an ASO to the pancreatic β-cells. In this approach, the covalent conjugation through a disulfide bridge between GLP1R and the ASO enhanced the selective cellular uptake of the ASO.

This work shows great potential for new treatment options for diseases caused by an aberrant gene expression in pancreatic β-cells, such as diabetes.

Making the transition to peptides

CPPs hold so much potential to overcome the current problems surrounding oligonucleotide delivery. These peptides ensure that the cargo molecules can reach their target cells and provide easier access to challenging tissues, such as muscle and bone marrow.

During the last 50 years, Bachem has been providing high-quality peptides, with around 80 Drug Master Files (DMFs) filed. Now, Bachem has begun to expand their areas of peptide expertise to the subject of oligonucleotides, which also require expert knowledge in solid-phase synthesis.

Bachem has seen a clear rise in demand for oligonucleotides and has built up its capabilities for large-scale production of these therapeutics.

With a strong innovation programme, Bachem is able to supply large volumes of oligonucleotide drugs, giving pharma and biotech companies the solutions they need to develop new therapies and change lives.