Cell and gene therapy: converting a Rolls-Royce into a Ford?

Many believe, writes Dr David Seaward, 3P Founder and Engineering Director, that what semiconductors and computers were to the latter half of the 20th century, biotechnology will be to the 21st 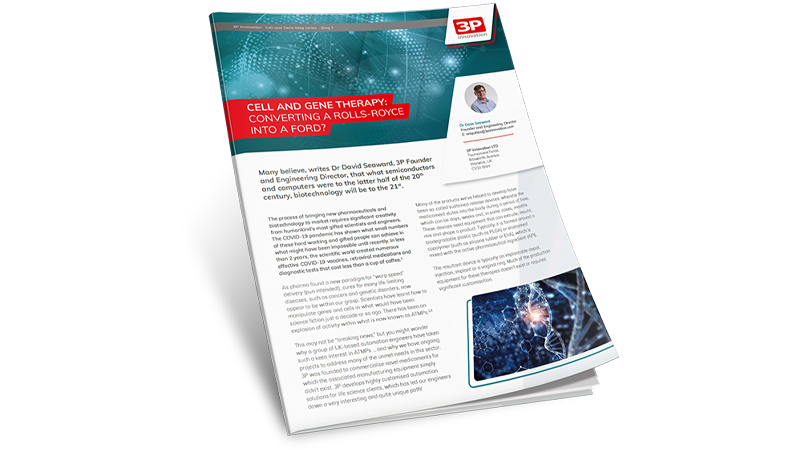 The process of bringing new pharmaceuticals and biotechnology to market requires significant creativity from humankind's most gifted scientists and engineers. The COVID-19 pandemic has shown what small numbers of these hard working and gifted people can achieve in what might have been impossible until recently. In less than 2 years, the scientific world created numerous effective COVID-19 vaccines, retroviral medications and diagnostic tests that cost less than a cup of coffee.1

As pharma found a new paradigm for "warp speed" delivery (pun intended!), cures for many life-limiting diseases, such as cancers and genetic disorders, now appear to be within our grasp. Scientists have learnt how to manipulate genes and cells in what would have been science fiction just a decade or so ago. There has been an explosion of activity within what is now known as ATMPs.23

This may not be "breaking news," but you might wonder why a group of UK-based automation engineers have taken such a keen interest in ATMPs ... and why we have ongoing projects to address many of the unmet needs in this sector. 3P was founded to commercialise novel medicaments for which the associated manufacturing equipment simply didn't exist. 3P develops highly customised automation solutions for life science clients, which has led our engineers down a very interesting and quite unique path!

Many of the products we've helped to develop have been so-called sustained release devices, whereby the medicament elutes into the body during a period of time, which can be days, weeks and, in some cases, months. These devices need equipment that can extrude, mould, mix and shape a product. Typically, it is formed around a biodegradable plastic (such as PLGA) or elastomer/ copolymer (such as silicone rubber or EVA), which is mixed with the active pharmaceutical ingredient (API). The resultant device is typically an implantable depot, injection, implant or a vaginal ring. Much of the production equipment for these therapies doesn't exist or requires significant customisation.

Clusters, megadeals, "Cellicon Valley" and the "Golden Triangle"
What are ATMPs and why do they matter?