Drug development can be a gas

The pharmaceutical and biotech industries rely heavily on industrial gases for applications such as supercritical fluid chromatgraphy and lyophilisation. Gas supply systems theefore need to offer high purity and traceability through the supply chain

Speciality gas use in drug discovery, production and preservation is key. Linde Gases reviews the increasing need for gas purity and traceability.

Both the pharmaceutical and biotech industries are heavily dependent on industrial gases. They are employed as ‘invisible helpers’ in most areas of the industry – from high-purity speciality gases for lab use, to process gases for production of active ingredients and drugs, in the development of chemical synthesis, as sterilisation gases, as gas mixtures to grow biological cultures and also for quality control.

‘With the immense cost associated with bringing a new drug to market and the speed at which companies are today required to do this, finding the correct molecular candidate and then being able to trust in the validity of the result is absolutely essential,’ says Katrin Åkerlindh, Global Product Manager for Speciality Gases & Speciality Equipment at Linde Gases Division.

Gas supply systems must be designed and built with the goal of excluding impurities and ensuring traceability through the supply chain. ‘The purity level of the speciality gases involved in this process, as well as the integrity of gas from the product source to point of use, is also critical,’ says Åkerlindh. 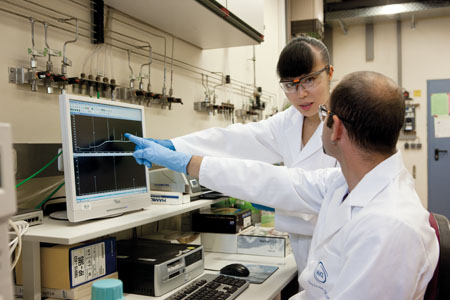 A relatively recent chromatographic technique, Supercritical Fluid Chromatography (SFC), which is used for the analysis and purification of low to moderate molecular weight, thermally unstable molecules, depends on high purity carbon dioxide (CO2) as the mobile phase. SFC is a hybrid of gas and liquid chromatography and although its principles are similar to those of high performance liquid chromatography (HPLC), it employs CO2 as it is an excellent solvent for many organic molecules.

SFC is an important technique as it allows the separation and determination of a group of compounds not conveniently handled by either gas or liquid chromatography. These compounds are either non-volatile or thermally labile, so gas chromatography cannot be used. They also do not contain functional groups that make detection by liquid chromatography possible. SFC can be applied to a wide variety of material requiring analysis, including drugs, foods, pesticides and herbicides. SFC also excels at separating and purifying chiral compounds and natural products.

SFC has started to grow in importance as it represents a greener alternative to employing the traditional solvents that are used in liquid chromatography. In addition to the reduced environmental impact, the use of SFC reduces the cost and time demands on laboratory operators to dispose of solvents safely, making it not only a greener but also a cost-effective analysis technique.

When used for laboratory work, the CO2 should not contain any contaminants that could interfere with or alter the analytical results

When used for laboratory work, the CO2 should not contain any contaminants that could interfere with or alter the analytical results. The manufacturers of SFC instruments recommend gas specifications in their operation manuals. In addition, organisations such as ASTM International have developed a standard guide for the CO2 purity and impurities specification when used with supercritical fluid applications, such as SFC, in the laboratory environment. Typical specification of SFC CO2 is 99.995% to 99.999% purity and with any impurities such as moisture, oxygen, hydrocarbons and non-volatile residues specified.

Advances in cryogens for lyophilisation

Another critical application for gases is lyophilisation, or the freeze-drying of pharmaceutical and biopharmaceutical products and intermediates to gently stabilise and preserve them during the manufacturing stage so that they can be delivered in a protected freeze-dried state to their point of use.

Like proteins, vaccines and other injectables, biologics must remain effective from manufacture to patient administration. These substances are expensive, fragile and can lose their efficacy during storage. Lyophilisation is a dehydration process for stabilising these valuable medical substances that is conducted in highly controlled environments and in compliance with strict regulatory guidelines. The temperature at which a vial freezes – the ice nucleation temperature – is critical in the process to optimise production times and improve quality of the final product.

However, the pharmaceutical and biotechnology industries have experienced an ongoing challenge to control the formation of ice crystals and ultimately achieve uniform nucleation. This lack of control has meant more complex and prolonged operating cycles, reduced product yields and uncertainty when trying to scale up production.

One of the latest and most innovative developments to combat the problem is a new cryogenic technology employing a sterile cryogenic ice ‘fog’ to control the formation of ice crystals during the lyophilisation process. Launched by Linde last year, Veriseq Nucleation results in enhanced lyophilisation cycles and improved product quality. 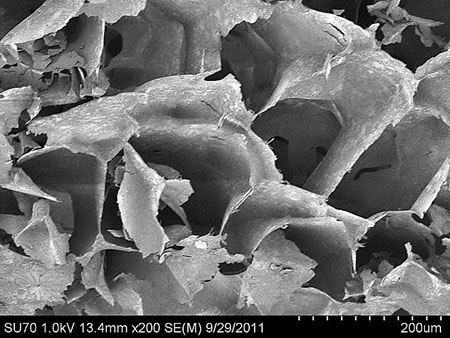 Veriseq Nucleation uses an ultra fine, sterile freezing mist, or fog, that spreads rapidly throughout the lyophilising chamber and causes all vials to freeze at the same time and at the desired temperature. Controlling the nucleation temperature produces the preferred ice structure within the product that reduces processing time and minimises product damage.

Until now, there has been no commercially feasible way of achieving such uniform ice nucleation

‘Until now, there has been no commercially feasible way of achieving such uniform ice nucleation,’ says Art Shirley, Head of Chemistry and Energy, Linde Gases Division. ‘Veriseq Nucleation technology enables the pharmaceutical industry to apply a new degree of control to their lyophilisation operations, leading to more robust freeze drying cycles.’

‘Test results demonstrate the feasibility of Veriseq Nucleation for both small-scale development and large-scale aseptic manufacturing. Results also indicate that both reduced cycle times, and increased product homogeneity are possible,’ said Joseph Brower, Technology Manager, IMA Life North America. ‘The advantage of Veriseq Nucleation is that it can be retrofitted to existing freeze dryers as well as incorporated into new installations, and initial customer feedback from demonstrations has been very positive.’

Once the stuff of science fiction, suspended animation is now a reality in many areas of biotechnology and medicine. If frozen correctly and stored at temperatures of -150°C or less, cell material can be put into a state of suspended animation for long periods of time. It can then be ‘defrosted’ and returned to a living state many years later. This technology is revolutionising medicine and biotechnology, enabling scientists to freeze stem cells, for example, and then use them to produce tailored remedies 20 or 30 years later. 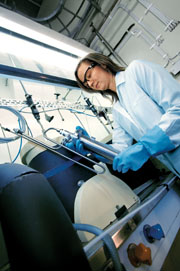 Industrial gases are the invisible helpers in most areas of the pharmaceutical industry, including high-purity speciality gases for lab use

Liquid nitrogen plays a crucial role in cryogenic storage, allowing biological material to be stored almost indefinitely, since decomposition is extremely low. However, it is just one part of the equation. The cell material must be very securely stored in a cryogenic state, with an audit trail that shows it has been held at the correct temperature for up to 30 years.

In the UK, Cryobank is a new, state-of-the-art cryogenic storage facility near Oxford, owned and operated by Linde subsidiary BOC. Designed and built as a secure archive and back-up cryogenic storage facility for researchers, it features cutting-edge vapour phase storage vessels and the latest Internet-based monitoring system, which enables researchers to check the status of any sample at any time. The UK Cryobank stores samples ranging from plant seeds to stem cells for a host of different research applications.

The facility also works closely with Linde’s other company-owned Cryobank in Hedel, in The Netherlands. Storing valuable archive material at two sites provides organisations with back-up security. ‘Safe, secure storage of research samples is vital in today’s multi-million pound medical research environment,’ explains Elton Chapman, BOC Healthcare Business Manager for Cryobank. ‘As one of the largest healthcare and industrial gases suppliers, we realised that demand for this kind of facility would be strong.’

Although Linde has been supplying liquid nitrogen to customers for the past 50 years, the establishment of proprietary cryobanks signals a shift in the pharma industry that sees business focusing on its core competencies and out-sourcing other requirements to appropriate service providers.