The TEA detector has long been an industry standard for nitrosamine analysis in food and beverages, which can also be applied in a similar manner to pharmaceutical products, reports Andrew James, Marketing Director, Ellutia Ltd 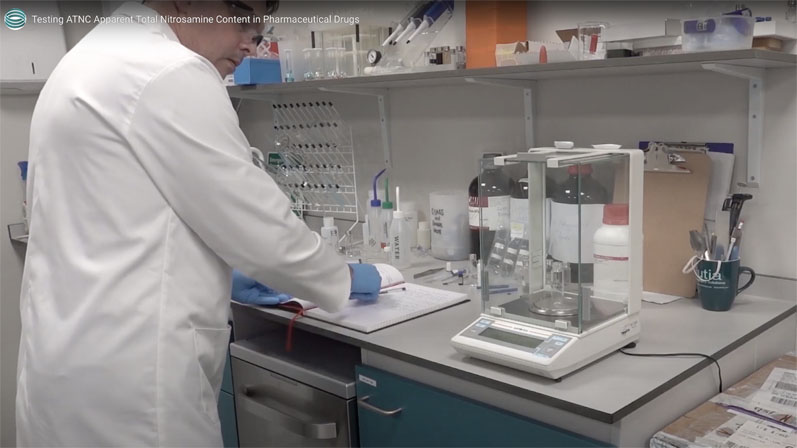 Scientific research has found evidence linking nitrosamines with increased rates of cancer.1 Nitrosamines are produced by the chemical reactions of a nitrosating agent with secondary or tertiary amines.

One of the most frequently occurring is N-nitrosodimethylamine (NDMA), which raised concerns in July 2018 after it was found in the pharmaceutical product valsartan.2 Further nitrosamine impurities have been detected in other medicines belonging to the sartan family, along with the allowable daily intake values set by the World Health Organization (WHO) to form the basis of the risk assessment.3

The presence of NDMA in pharmaceutical products has spurred action from regulatory agencies and placed pressure on the industry to improve the identification and detection of NDMA and other nitrosamines. However, the production environment complicates this process.

Nitrosamines can be produced when a secondary amine is present with a nitrating source — such as a nitrite, nitrosyl or nitrate. Amines produced as a by-product during the manufacturing process can be converted to nitrosamines in subsequent synthesis steps if not properly removed.

A variety of conditions can drive the reaction, including acidity, the presence of reducing agents or high temperatures. Any manufacturing process that brings a nitric oxide (NO) source in contact with an amine under these conditions has the potential to produce nitrosamines.

In addition to in-process production, contamination can be a serious concern. External sources can include water, solvents and packaging, as well as the raw materials themselves.

The European Medical Agency (EMA) recently instituted a requirement that all pharmaceuticals have an assessment of raw materials and manufacturing processes to reduce the risk of contamination or formation of nitrosamines.4

Other regulatory agencies in countries around the world have considered or established similar testing requirements, which are also likely to tighten soon.

Detection and identification of nitrosamines

Introducing a new step, however, or having to outsource testing at different stages of production can be expensive and can create production delays. Additionally, these analytical techniques present challenges in terms of easy integration into the pharmaceutical manufacturing process — particularly the expense, training and maintenance required with mass spectrometers. 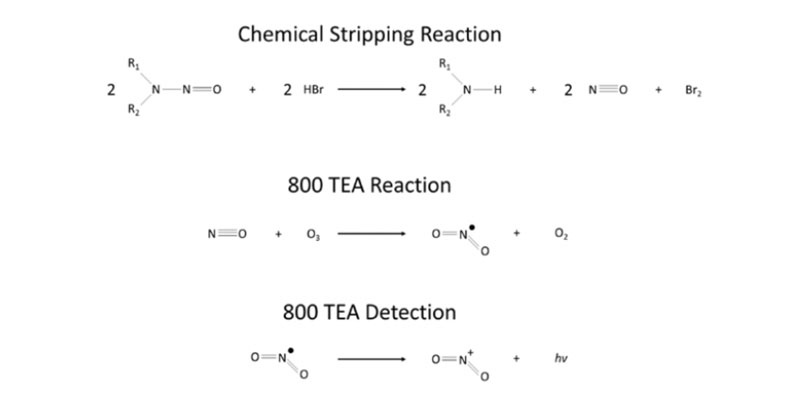 The ease at which nitrosamines form from common precursors during routine manufacturing, processing and storage processes has posed a similar challenge to the food and beverage industry. That has placed pressure on food and beverage manufacturers to improve the detection of carcinogenic compounds generated from nitrites, known as N-nitroso compounds (NOCs).

NDMA is also one of the most frequently occurring NOCs in food and drink production.

The detection of NOCs has improved greatly in the food and beverage industry with the emergence of highly specific and sensitive gas chromatography (GC) detectors, such as the Thermal Energy Analyser (TEA). TEA has been a standard for nitrosamine analysis since its design in the late 1960s as it is able to rapidly identify and analyse NOCs.

TEA offers an alternative to MS, providing an inexpensive, robust, sensitive and highly specific means of detecting and quantifying nitrosamines in samples. It can be easily coupled to a GC and, with the appropriate interface hardware, can also be coupled to an LC.

TEA specifically detects nitroso- and nitro- compounds via chemiluminescence with minimal matrix effects, combining the separation power of chromatography with the quantification power of absorption spectroscopy.

Recent advances in GC-TEA technology, as well as simpler usability and lower costs, have improved nitrosamine detection capabilities in food and beverage production environments. This not only improves overall safety standard detection, but also levels the playing field for smaller producers that are now able to undertake the safety and standardisation checks to meet a range of international standards.

In CG-TEA analysis, a GC is used to separate components before the effluent is introduced into a pyrolyser. Nitroso-containing compounds cleave at the N-NO bonds, releasing the nitrosyl radical that reacts with the ozone under vacuum to produce electronically excited NO2, which rapidly decays and emits near infrared light and is detected by a sensitive photomultiplier (Figure 1).

An ozone destroyer protects the pump and laboratory personnel from escaping excess ozone. A typical chromatogram is presented in Figure 2, showing eight of the most common volatile nitrosamines.

TEA relies on selective thermal cleavage of the N-NO bond and the detection of the liberated NO radical using the chemiluminescence signal generated by its reaction with the ozone. TEA systems have nitrogen chemiluminescence sensitivity of less than 2 pg N/second, vastly improving detector sensitivity for nitrosamine analysis.

Combined with selectivity capabilities of gN/gC >1x107, such systems eliminate matrix interferences for use in complex food and beverage applications. TEA detectors can also switch between nitrogen and nitroso/nitro modes, with the latter capable of eliminating interfering nitrogen compounds.

The selectivity of the bond breakage can be controlled by the temperature of the pyrolyser. At 500 °C, bond breakage is largely limited to the N-N bond, making this kind of detector highly selective to nitrosamines. Increasing the temperature to 650 °C causes the breaking of carbon-nitrogen bonds, allowing the detection of nitro groups as well.

The TEA can also be configured for the measurement of apparent total nitrosamine content (ATNC). The system is self-contained and can fit easily in a fume hood. Sample prep for ATNC is minimal and liquid samples can be injected directly. The solvent used in the sample is largely immaterial and can include samples in water, methanol or dichloromethane.

Viscous samples may need to be diluted for effective injection. Solid samples will need to be ground and extracted to transfer the nitrosamines into liquid form.

Rather than being subjected to pyrolysis, the samples undergoing ATNC analysis are injected into refluxing ethyl acetate containing hydrobromic acid (HBr). A reaction with the HBr produces NO, a secondary amine and bromine. A flow of nitrogen above the headspace of the reaction vessel then carries NO toward the TEA.

A condenser coil prevents loss of the boiling solvent and a second cold trap further cleans the vapour before it enters the TEA.

As previously mentioned, NO is then reacted with ozone to produce the signal. The typical injection size for ATNC is 50 μL, although some users may choose to go as high as 500 μL. It should be noted that samples containing higher amounts of nitrosamines will more quickly deplete the HBr in the reaction vessel and necessitate more frequent replenishment.

The total time from injection to results is typically about 5 minutes, although it can take longer if a sample containing a large number of nitrosamines is injected.

Because the configuration to the TEA is identical, many users utilise a switching valve to allow the same TEA unit to be used as either a GC detector or a total nitrosamine analyser. The ATNC configuration makes a good screening test, with positive samples then subjected to further analysis to identify the compounds present.

Because the results are independent of the side groups of the nitrosamine, the results from this method are typically reported as N-N=O concentration in ppm or ppb. The mass/mass concentration of the compound containing the N-N=O will be different, depending on its molecular weight.

As a result, pharmaceutical companies must be prepared by implementing risk assessments and demonstrating the results of their assessment. TEA provides a robust, relatively low cost and low maintenance technique for the detection and quantitation of nitrosamines in food and beverage production, giving pharmaceutical companies insight and real-world examples of how it could be integrated into their own quality control process.