Improving the taste of paediatric medicines

Ion exchange excipients are well characterised and have a favourable safety profile in oral formulations. Amie Gehris and Jon Fisher, Dow Chemical Co, look at their use in overcoming formulation challenges for oral paediatric medications

One of the key issues with the development of paediatric formulations is dealing with bitter or foul-tasting active pharmaceutical ingredients (APIs). Taste perception is driven by flavour sensation in the buccal cavity, and flavour sensation in turn is determined by a combination of taste, smell and chemical irritation. Bitter tasting APIs can adversely affect patience compliance and children are typically more sensitive to foul tastes than adults.

Paediatric formulations such as liquids and oral disintegrating tablets (ODTs) allow the API to come into contact with the taste buds. The two main taste masking techniques are the addition of flavours to hide the objectionable taste and limiting the dissolution of the API in the saliva within the buccal cavity. The addition of flavours or sweeteners to hide taste may be problematic with paediatric patients due to conditions such as diabetes, fructose intolerance, or aspartame intolerance with phenylketonurea patients. Additionally, some poorly adsorbed or non-digestible sweeteners may have a laxative effect.

Limiting the dissolution of the API in the buccal cavity can be accomplished through the complexation of the API with ion exchange resins. Ion exchange excipients are well characterised and non-systemic, which confers a very favourable safety profile when used in oral formulations. Pre-formulating an API with an ion exchange resin for taste masking is a fairly straightforward process. A solution of the drug is prepared in de-ionised water (or suitable organic solvent for water-insoluble APIs). The resin is then added to the solution to complex with the API and form a resinate. The resinate can then be separated from the remaining drug solution using filtration, and resulting resinate wet cake can be dried and formulated into the desired final formulation whether it be solid or liquid. 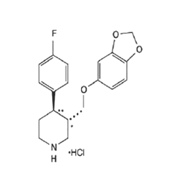 A dynamic flow-through assay was employed to mimic the residence time of the resinate in the buccal cavity, and UV detection was used to determine the concentration, including the Cmax, of the API. The Cmax values are used as proxies for the degree of taste masking. Lower Cmax values are an indicator of better taste masking.

Paroxetine was loaded onto either a strong acid (sulfonic acid functionality) cation exchange resin or a weak acid (carboxylic acid functionality) cation exchange resin and taste masking curves were compared with that of paroxetine alone. As can be seen in Figure 2, both resinates demonstrated a marked reduction in the Cmax values in the assay with the strong acid resin providing a slightly higher reduction than the weak acid resin.

It can be concluded that both resins demonstrated effectiveness for taste masking of paroxetine. It should be noted that the strong acid resin typically will demonstrate a modified release of an API in the gastro-intestinal tract. Therefore, the weak cation exchange resin is preferred for immediate release formulations while the strong acid cation exchange resin is preferred for extended release formulations.

Complexation of APIs with ion exchange resins is a safe and well-established technique that can be used to mask bitter tasting compounds thus helping to improve patient compliance, particularly for paediatric patients. Additionally, the use of ion exchange resin technology can combine taste masking with modified release, which can further simplify oral formulations.