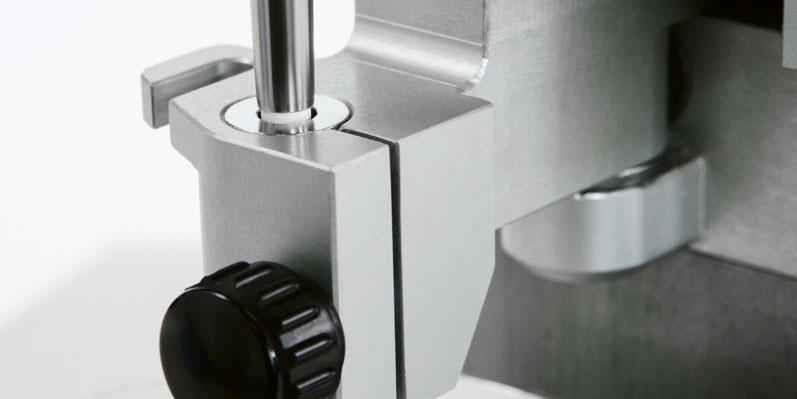 The delivery of drugs to the lungs by dry powder inhalers (DPIs) is strongly influenced by both formulation and the process parameters involved in capsule filling.1 Powder formulations for inhalation products commonly consist of a binary adhesive mixture, a coarse carrier (typically lactose) and the active principle to provide appropriate aerosolisation performance — even in the case of very low dosage drugs.2

Material attributes and the filling process have a critical effect on dosage uniformity and the aerosolisation performance of powders. During this research, we aimed to analyse the contribution of different types of lactose (material) and the effect of instrument settings (process) on dose uniformity and the aerosolisation performance of powder mixtures dosed in hard capsules using a benchtop capsule filler (Minima).

The first part of the study was devoted to evaluating the effects of encapsulation parameters on final capsule weight. Capsules were filled using a Minima benchtop volumetric capsule filler (IMA SpA, IMA Active Division, Italy) equipped with a 2.5 mm diameter dosator. The effects were measured using a full factorial design of experiment (DoE) process that assessed

Two levels for each factor were explored and coded (Table I).

The average weight of the capsules and relative standard deviations (RSD%) were selected as critical quality attributes (CQAs) to be considered as outputs of the design. Data analysis and model computations were performed with Chemometric Agile Tool (CAT) software.

Each lactose was sieved (twice) through a 38 µm mesh for one hour. Only the fraction retained above this size was used for the following experiments: particle size distribution analysis was performed by laser diffraction (Spraytec, Malvern, UK) to check the efficacy of the sieving process, as well as to estimate the residual percentage of powder with a diameter below 3 µm.

These four lactose types were used as the coarse fraction for the preparation of binary mixtures in association with micronised lactose (Lacto-Sphere MM3, Micro-Sphere SA, Switzerland, Dv50 = 3 µm), which was selected to mimic the behaviour of a micronised API.3

Lacto-Sphere MM3 was added at a final percentage of 2%, 5% or 10% w/w, respectively. All mixtures were prepared by putting the fine lactose between two layers of coarse lactose in a “sandwich.” Samples were then blended in a Turbula mixer for 40 minutes.

The emitted dose was determined as the difference between the weight of the “device + capsule” before and after actuation, whereas the fine particle dose was determined by weighing the amount of powder collected on the filter. Emitted fraction (%) and fine particle fraction (%) were calculated from the emitted and fine particle dose, respectively, as a percentage with respect to loaded dose and emitted dose. Data were compared using a two-tailed unpaired t-test performed with Microsoft Excel.

The weight of capsules obtained from each setting was measured and the average of six replicates was used to calculate a linear regression model (Equation 1), where X1 = bed powder height, X2 = compression and X3 = dosage. The model was validated at the central point. 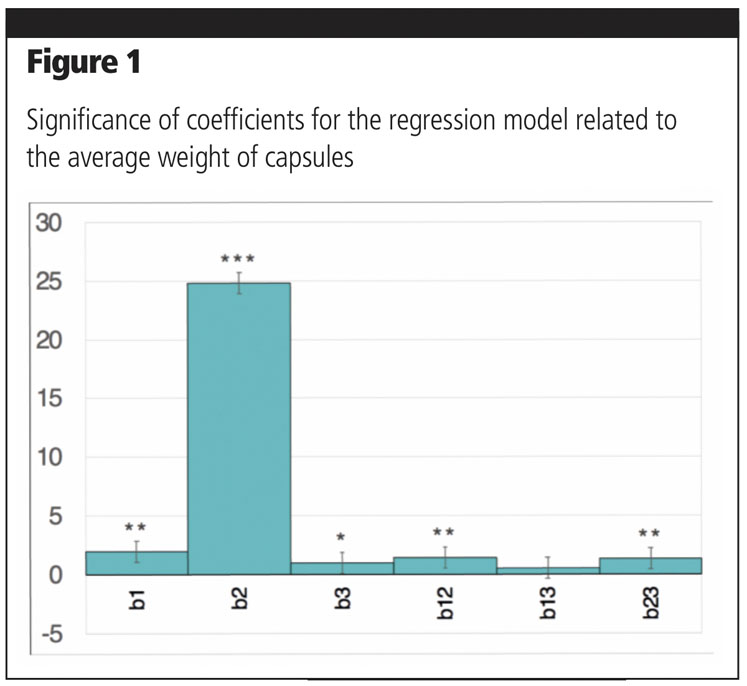 Coefficients associated with linear terms were highly statistically significant, confirming, as might be expected, that all factors have a critical role on the final weight (Figure 1). It can also be deduced that compression is by far the most relevant factor affecting final weight, as confirmed by the significance of the interaction terms involving this parameter.

When considering RSD, this was always less than 5% and not significantly affected by any of the parameters. This suggested that filling with Minima provided consistent results — independent of settings — and that the regression model could be used to predict the average weight of the capsules. 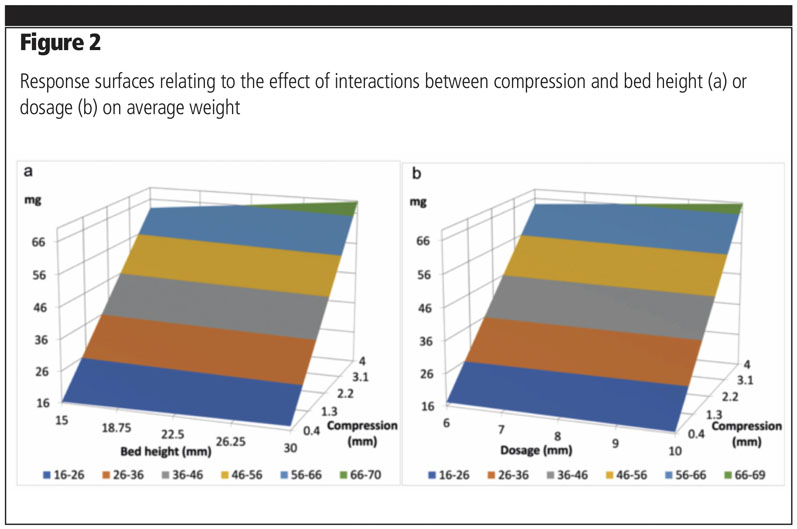 Further work focused on evaluating the role of material properties on aerosolisation performance. Four raw materials were selected and sieved. Particle size analysis by laser diffraction confirmed the effectiveness of sieving and the elimination of the fine particle fraction. Respitose ML001 had the lowest Dv50 (51.97 µm, ±1.73), whereas the fractionated lactose (115.55 µm ±1.71), Lactohale 206 (105.12 µm ±1.12) and Lacto-Sphere MM50 (95.01 µm ±1.33) had similar Dv50s (close to 100 µm).

Fractionated lactose had a wider size distribution, as evidenced by the higher range value. This analysis also allowed us to estimate the amount of residual fraction that had a diameter of less than 3 µm: Respitose ML001 = 7.73%; fractionated lactose= 3.89%; Lactohale 206 = 1.92%; and Lacto-Sphere MM50 = 1.37%.

These values were added to the nominal amount of fines in the mixtures and used to normalise the fine particle dose, indicated as nFPD(%). Evaluating the aerosolisation performance by FSI allowed us to compare the effects of different coarse raw materials on the emitted and fine particle fractions (n=10).

No significant differences could be found within the different types of lactose or within the different dosages of fine particles in terms of emitted fraction (Figure 3a). As for nFPD(%), a high variability was observed for all mixtures, which was independent of lactose type or amount of fine fraction (Figure 3b). A common trend was observed for all types of lactose; the amount of normalised fine particle dose recovered on the filter decreased when the percentage of fine component increased.

Fractionated lactose was the worst performing in terms of nFPD(%). By contrast, Lacto-Sphere MM50 was the best performing at all concentration levels and was, for this reason, selected for the following experiments. The three mixtures were used to fill two Coni-Snap size 3 hard gelatin capsules using the Minima: two settings were compared.

For setting A, the dosage was 20 mm and compression was set at 3 mm; for setting B, the dosage was 5 mm and no compression was applied. For each setting, 15 capsules were filled with a target weight of 15 mg. Taking into consideration the emitted fraction, no significant differences could be detected between filling setting A and B for mixtures containing 2% or 5% of the fine fraction; a significantly lower amount of powder was emitted for the mixture with 10% fines filled with method B (p = 0.001) (Figure 4a). 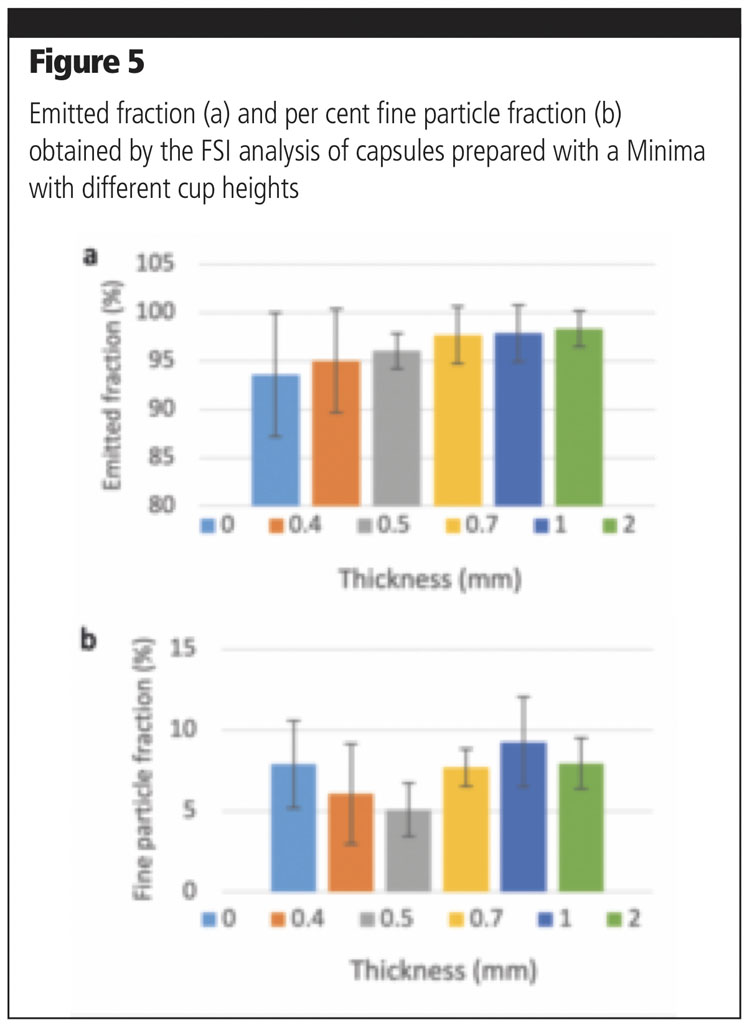 As for FPF% (Figure 4b), no significant differences could be observed among all the mixtures, independent of filling method, which could be ascribable to a high variability in results. Nevertheless, filling method A seems to provide more consistent results with different types of mixtures, both in terms of FPF% and variability.

A further parameter that was investigated with the Minima was the cup height. This was varied by inserting thicknesses of 0.4, 0.5, 0.7, 1 or 2 mm below the cap. The dosage was set at 20 mm and compression at 3 mm (as in method A).

The obtained results suggest that the reliability of the benchtop capsule filling device under investigation, in terms of accuracy and repeatability — even at very low dosing levels — is comparable with those reported in the literature for other types of equipment.4

Compression was identified as the main parameter affecting both final weight and emitted fraction after capsule discharging with the RS01. By contrast, the type of raw material affects the fine particle fraction, with Lacto-Sphere MM50 showing better performance at a micronised powder concentration of 2%, which is particularly interesting as a surrogate low-dose API formulation.