Laser diffraction and spatial filter velocimetry offer an alternative to sieve analysis for granule sizing and granulation monitoring. Paul Kippax, Malvern Instruments and Tamal Mukherjee, Malvern-Aimil Instruments, describe how they can be used

Fluidised bed granulation processes enable the conversion of fine, poorly-flowing tableting blends into a granulated feed that performs well in the tablet press. Such processes are complex, with mixing, wetting, granule growth and drying all taking place within the same piece of equipment. As a result it can be difficult to control the properties of the exiting granules, which are influenced by a number of factors, including raw material quality, processing conditions and design features of the processing equipment. Granulation scale-up is widely recognised as being particularly challenging.

The Quality by Design (QbD) approach, now widely adopted across the industry and required by regulators for generic submissions, calls for a detailed understanding of the factors that influence the Critical Quality Attributes (CQAs) of a finished tablet. These CQAs include dose uniformity, hardness and stability – parameters that can only be measured post-tableting. In contrast, granule size, which has been shown to correlate directly with certain CQAs, enables measurement much earlier in the tablet production process1. Granule sizing can therefore be extremely valuable for scoping the design space of a granulation process and for achieving reliable scale-up.

While sieving remains in widespread use it is a slow, labour-intensive analysis that offers only poor resolution and risks granule break-up

While sieving remains in widespread use it is a slow, labour-intensive analysis that offers only poor resolution and risks granule break-up. Its replacement with laser diffraction and SFV enables faster granule size measurement. Experimental data confirm the close agreement of results measured using all three of these techniques, underlining the practicality of applying laser diffraction and SFV in tandem, in place of sieving, for fast, reliable granulation development, monitoring and control.

An introduction to fluidised bed granulation: Efficient handling of the fine powders that frequently constitute tableting blends can be problematic. Materials in the sub-10 micron (µm) range, where active ingredients often lie, are especially challenging because of strong attractive interparticle forces that result in high cohesivity and poor flowability. Granulating a tableting blend eliminates the health and safety risk associated with very fine particles, improves flowability and enables the close control of properties such as bulk density, compressibility and solubility, which can directly influence finished tablet CQAs. Furthermore, granulation can help prevent the segregation of very low quantities of active ingredient, thereby safeguarding content uniformity.

In fluidised bed granulation, a binder solution is sprayed onto particles that are suspended in an upward-flowing heated air stream. Larger sized agglomerates form from the fine powder as a result of liquid bridging. The process enjoys widespread industrial application and produces a narrower particle size distribution than the alternative wet granulation method of high shear mixing. However, like all granulation processes, it can be difficult to control and to scale up.

The particle size of granules in a tablet blend can influence flow behaviour in the tablet press, and also properties such as bulk density and compressibility

The particle size of granules in a tablet blend can influence, for example, flow behaviour in the tablet press, and also properties such as bulk density and compressibility. These properties go on to affect the CQAs of a tablet. As a result, particle size is a useful, easily-measured metric for understanding and scoping fluidised bed granulations, for controlling and tracking the trajectory of the process. However, the successful generation of particle size data in the lab, through scale-up and into production, relies on identifying the most relevant analytical technology for each step.

A modern size analysis strategy for granulation processes: The particle sizing techniques of laser diffraction and SFV both offer automated, rapid data acquisition and streamlined analysis with minimal manual intervention. These attributes make them attractive alternatives to sieve analysis in all instances, with the potential to reduce substantially the manual burden associated with gathering the information needed to implement QbD. The ease of use of offline laser diffraction systems and the resolution they provide make them especially helpful in the earlier stages of granulation development. It is at this point that laser diffraction can offer rapid, detailed scoping of the impact of different variables on the properties of the finished granules.

SFV, on the other hand, is a relatively inexpensive and effective choice for continuous inline monitoring during pilot scale studies and into commercial operation. At the pilot stage this enables efficient scoping of the design space, while continuous measurement supports effective process control within commercial production.

A productive, cost-efficient strategy for particle size analysis during fluidised bed granulation may therefore prove to be the application of laser diffraction analysis during early stage development, followed by a gradual switch to SFV during scale-up and into production. Following this strategy, especially from a starting point of using sieve analysis, relies on effective specification transfer. The following case study demonstrates the close agreement of results measured by all three sizing techniques and the consequent ease of specification transfer.

A study was carried out to investigate the application of sieve analysis, laser diffraction and SFV to granulation process monitoring, to demonstrate whether the data produced using each technique were sufficiently similar to allow their interchangeable application.

A granulation was performed in a Glatt GPCG 1.1 fluid bed granulator using a model blend designed to reflect the properties of those used for tableting. The granules produced were then measured by sieve analysis (Electrolab sieve shaker), laser diffraction (Mastersizer 3000, Malvern Instruments) and SFV (Parsum IPP70, Malvern Instruments). The results for the sieve analysis are shown in Table 1 and indicate that the majority of the particles lie in the 1–1.18mm size range.

For the laser diffraction measurements, granules were dispersed using Aero S, the integrated dry dispersion accessory of the Mastersizer 3000, which entrains particles in a stream of pressurised air. Dispersion ensures that particles are measured in an unagglomerated state, thereby improving the reproducibility and relevance of the laser diffraction data.

A major advantage of the Aero S is that it can handle the larger sample sizes required to reduce sampling errors, while maintaining rapid measurement times. This is particularly important for samples that are prone to segregation due to the presence of larger particles, such as may occur during granulation. The results of the laser diffraction analysis are shown in Figure 1. The results generated are highly repeatable with an RSD of 0.4% at the median (Dv50). The Dv50 is measured at 1,069µm, which is in line with the sieving data. 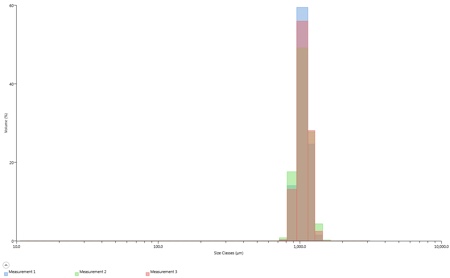 Figure 1: Particle size distribution data for the granules measured using laser diffraction is in line with the results from sieve analysis

The SFV system employed also used an integrated dispersion cell to ensure the measurement of primary particle size. This technique produces number-based particle size distribution data which can be converted into volume-based distributions for direct comparison with laser diffraction data. The SFV results, both number- and volume-based, are shown in Table 2.

All three sets of data show close agreement for size measurement of the granules, with a difference of just 2% between the laser diffraction and SFV data. This suggests that size specifications can be relatively easily transferred from one technique to another. This in turn means that the sizing technique can be selected on the basis of the practicalities and requirements of measurement at different scales, and the resolution and quality of data required for effective product control.

In conclusion, laser diffraction and spatial filter velocimetry offer considerable advantages relative to sieve analysis for the measurement of granule size. Fast and highly automated, laser diffraction enables far higher resolution than sieving with considerably lower manual input, making it especially valuable in the earliest stages of granulation development. SFV systems on the other hand are a cost-efficient solution for inline sizing as a granulation proceeds, and provide timely measurement for process monitoring and control. Both techniques have the potential to save time and labour when gathering the data needed to implement QbD and develop a robust, well-controlled granulation process.

The data presented here provide reassurance that the specification transfer required to exploit the potential of both techniques can be easily implemented. Furthermore, it confirms that both technologies provide results that are closely comparable to those delivered by sieve analysis. It is clear that accessing the considerable benefits of switching from sieve analysis to laser diffraction and SFV can be both straightforward and rewarding.