Scientists at the University of Birmingham have discovered a protein that could hold the key to novel gene therapies for skin problems including psoriasis – a common, chronic skin disease that affects over 100 million people worldwide 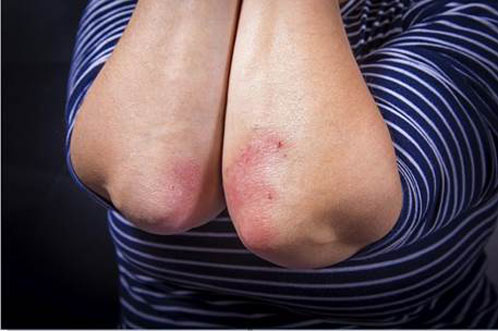 The protein is a fragment of a larger molecule, called JARID2, which was previously believed to only be present in the developing embryo, where it coordinates the formation of tissues and organs.

However researchers led by Dr Aditi Kanhere from the School of Biosciences found a shortened form of JARID2 in adult skin cells, and they showed it is responsible for ensuring these skin cells ‘differentiate’ (become a more specialised cell type).

The significance of this finding was immediately recognised by Dr Kanhere’s team, which studies how gene expression is regulated in normal and diseased conditions.

Dr Kanhere explains: “In some diseases, cells lose their ability to differentiate, and reproduce more rapidly. Being able to redirect cells back to their usual life cycle could alleviate the processes behind the disease.”

This is the case with psoriasis, which is caused by the rapid reproduction of skin cells. These excess cells are then pushed to the surface of the skin too quickly, resulting a build-up of cells that aren’t fully mature on the surface of the skin, and causing flaky, crusty red patches covered with silvery scales.

Dr Kanhere’s research, published today in EMBO Journal, shows that rN-JARID2 is present in the skin layers, where it is where it is responsible for ensuring that the tissues maintain their usual state of differentiation which is necessary to properly form skin layers.

The discovery has caught the eye of the patenting team at University of Birmingham Enterprise, who filed a broad-based patent covering the use of rN-JARID2 in therapies aimed towards conditions caused by hyper-proliferation of skin cells such as psoriasis.

The research team is now investigating how rN-JARID2 is generated and its wider implication in disease, while the patenting team hopes that this discovery will ultimately lead to novel therapies for skin conditions.