The impact of API properties on product design

The physico-chemical properties of an active pharmaceutical ingredient (API) in a solid state are very important as they affect the choice and design of formulation as well as the performance of the dosage form. A robust solid state characterisation of the API at an early stage helps better understanding of its properties and the effect these characteristics have on the drug behaviour, especially on uniform distribution, solubility, stability and its in vitro dissolution and bioavailability.

Solid state manipulation is carried out in the final step of the API production and in subsequent steps. For small molecules, the final step is typically carried out as a recrystallisation of the drug substance in a non-toxic solvent (mostly water or alcohols), including a filtration step increasing the overall purity of the substance and removing any particles from upstream processing. The most important parameter to control in this step besides the actual purity is particle size distribution and polymorph crystallisation. This step can also be used to optimise drug substance characteristics for downstream processing of the drug product.

In a typical batch-type operation setting, the crude material is charged into a tank reactor equipped with a stirrer and a cooling jacket (see Figure 1). The tank is then filled with the appropriate solvent and the mixture is heated to create a clear solution, which is passed through a filter system and transferred to a second similarly equipped tank. Now, crystallisation is induced either in removing solvent, adding an anti-solvent or cooling the batch, all decreasing the solubility of the substance in the phase. 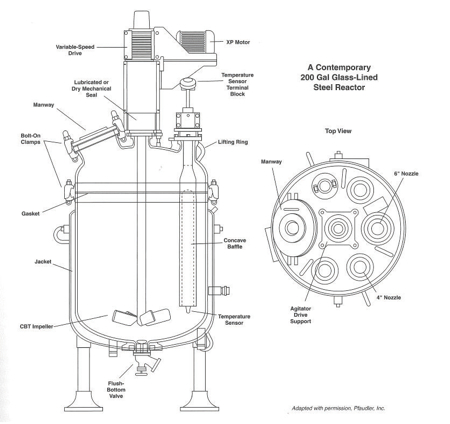 The mixture runs through a metastable, supersaturated phase where the product remains in solution but is not crystallising. During this critical step, effective control can be applied by adding seeding crystals, typically derived from a previously produced batch. The crystallisation then takes place, not only via primary nucleation (i.e. formation of nuclei due to supersaturation) but also secondary crystallisation, e.g. via fluid sheer where material is deposited on the nuclei but torn apart forming secondary nuclei.

The latter is controlled by the type and the tip-speed of the stirrer. The ratio of the different speeds of crystal growth and of the generation of secondary nuclei will determine particle number and size and therefore particle-size distribution.

After completed crystallisation the batch can be further stirred to age the crystals and – sometimes – to crush the crystals, e.g. through vigorous stirring. Briefly reheating the batch and cooling it down again will dissolve smaller particles and deposit the dissolved material to the remaining larger particles (Ostwald ripening, see Figure 2). This can be useful if the subsequent step of filtering of the particles from the mother liquor is difficult to execute.

The determination of solubility and nucleation temperature can be quickly probed in the lab by screening of the best conditions. A possible experimental setup is shown in Figure 3. The depicted device consists of four separate zones in which the temperature can be controlled between 0 and 100°C. Each zone is equipped with four standard HPLC vials of which the turbidity is measured by means of LEDs.

The crystals of a given substance and its morphology may vary – the shape of the crystal may occur as acicular (needle-shaped), prismatic, pyramidal, tabular, columnar and lamellar types. The crystal habit is of importance since these may affect the uniform distribution of the drug substance in a blend of excipients in a formulation. The crystal habit can also influence the flow properties of a powder in a solid state and the ease of tablet compression of the powder. The plate like crystals of tolbutamide, for example, cause powder bridging in the hopper of the tablet press and also result in capping of tablets during compression.

Screening or sieving of drug substance to obtain a uniform particle size or de-agglomeration is easier if crystal habit is homogenous – acicular crystals are difficult to screen. Although there may not be significant differences in the overall bioavailability of drugs with different crystal habits, it may influence the rate at which the poorly soluble drug will dissolve in buffer solutions or gastrointestinal media.

It is very well documented that particle size has an important influence on dissolution rate: the larger the surface area exposed to the solvent, the higher the dissolution rate of the particles. Particle size also influences uniformity of dosages of very potent drugs formulated in a solid oral dosage form. Control of particle size is thus extremely important and plays a significant role in formulation design of oral dosage forms. 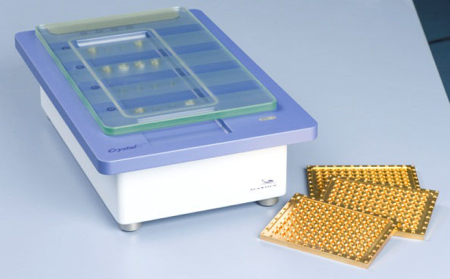 Particle size also has important effects on bulk properties of powders such as bulk and tapped density, flowability, cohesivity, wettability, etc. It is important that pharmaceutical powders are able to flow freely into and out of storage containers, hoppers of tablet presses and capsule fillers so that uniform tablet or capsule weight is achieved.

Uneven particle flow can cause air entrapment that could result in capping of tablets and non-uniform fill of capsules. Cohesive forces between particles arise from van der Waals forces, electrostatic forces from frictional charges during handling, and these are all related to particle size and surface area of powders. Thus particle shape and size influence flow properties and cohesion of powders that greatly affects solid dosage form development and manufacturing.

The wettability of powders, as measured by the contact angle (theta) of the powder with water, determines the contact of the solvent (water) with the particle mass. The wettability of powders is critical since penetration of water into granules or tablets precedes dissolution. Hydrophobic drug substances have dual problems – they are not readily wetted and even when wetted they have poor solubility, which could result in poor bioavailability. Research in the field of crystallisation has demonstrated the effects of solvents on changing crystal habit, wettability and in turn on dissolution properties.1 Formulation techniques need to address the optimum wetting properties during the design phase.

In cases of polymorphism,where a substance has more than one crystalline form, control of the polymorph becomes very important as different polymorphs have different properties.2 The notion of Wilhelm Ostwald that the least stable polymorph crystallises first poses a serious problem for chemical processes and results in common nucleation of a metastable form of a substance. The control of the right polymorph is typically conducted in the right crystallisation and drying system identified in chemical development.

It must be assured that no seeding with the wrong polymorph is possible. In case a wrong polymorph is obtained in one batch, thorough cleaning has to be conducted to avoid seeding the next batch with the wrong polymorph. In the solution mediated polymorph transformation the less stable form drops out of solution first but consumes super saturation until the more stable form is supersaturated which then drops out. This process then consumes super saturation of the less stable form which then dissolves again, driving the entire batch to the most stable polymorph. Superior polymorphic control, however, can be obtained by seeding with the right polymorph in the final crystallisation process.

The methods applied routinely for analytical polymorph control are dynamic scanning calorimetry (DSC), FTIR and, most importantly, XRPD (see Figure 4). The latter is most effective in determining and quantitating mixed phases.

Polymorphs often have different crystal habits and hence they too will be subject to the problems mentioned above on the impact of change in crystal habit in formulation design. However, polymorphs have different crystal lattices and free energy, which influence their transformation, stability and behaviour in processing and stability. The most important consequence of polymorphism is the possible difference in the bioavailability of different polymorphic forms of a drug,3 particularly when the drug is poorly soluble.

As this article has shown, key aspects of the API properties are critical considerations during API production and the impact of the solid state characterisation and material properties can affect the formulation design of the drug product. Breaking down the silos and communication gaps between API manufacturer and dosage form developer and bringing together the research chemist and the drug product formulator will help address critical considerations while bringing efficiencies of cost reductions and time saving.