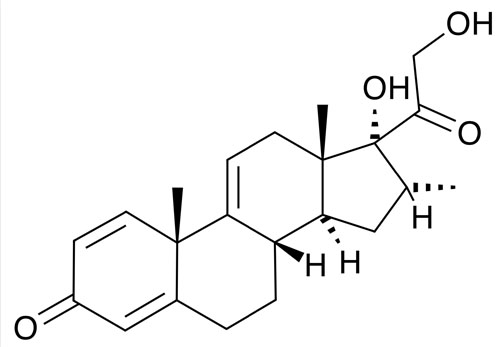 The current standard of care relies on anti-inflammatory corticosteroids that target the glucocorticoid receptor … but their chronic use leads to side-effects including bone loss.

An alternative is being developed by Swiss company Santhera in which the backbone of the steroid has been modified — resulting in a maintenance of the positive effects but with a reduction in the side-effects.1

This is believed to be the result of the removal of a receptor-ligand hydrogen bond. It is thought to act as a partial agonist. A trial was done in 133 boys aged 4–6 with genetically confirmed DMD who had not previously undergone corticosteroid treatment.

The randomised, double-blind clinical trial was controlled with a placebo and prednisone.2 Patients were given either 2 or 6 mg/kg of vamorolone, 0.75 mg/kg prednisone or the placebo for 24 weeks. Primary motor outcomes evaluated include time to stand from supine velocity, 6-minute walk distance and time to run or walk 10 m.

In all, 114 boys completed the treatment. The primary endpoint for change from baseline in time to stand velocity was met for the higher dose of vamorolone and several other primary endpoints were also met.

Markers for bone turnover declined in the boys given prednisone, but not those given vamorolone. All three treatment groups led to an increase in adrenal insufficiency.

In a 30-month non-randomised, controlled open label extension trial, 46 boys with DMD aged 4.5–7.5 who had completed an earlier 6-month dose-finding study were enrolled in a 24-month long-term extension study, with the dose of vamorolone escalated to 2.0 or 6.0 mg/kg.3

The primary outcome was change in time to stand velocity from dose-finding baseline to end of the extension study; 41 boys completed the study. Among the 21 who were treated with at least 2.0 mg throughout the 30 months, there was a decrease in mean velocity from baseline to 30 months of 0.206 to 0.189 rises/s, and no statistically significant differences between these participants and matched participants in historical control groups receiving glucocorticoid treatment.4

The drug was therefore associated with the maintenance of muscle strength and function. It was well tolerated up to the highest dose and there was a significant growth delay in comparison with those given vamorolone.