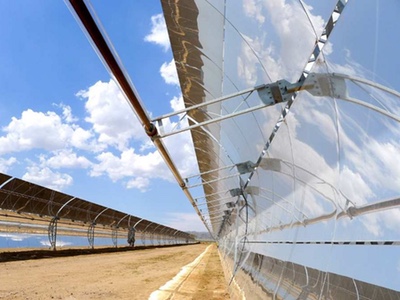 Under the terms of the partnership agreement WACKER will supply its newly developed HELISOL silicone fluid to Royal Tech, its exclusive partner in China.

Royal Tech uses the silicone fluid as a heat transfer medium in its solar power plants. HELISOL can withstand thermal stress of up to 425 °C for a long period of time and its viscosity remains low even at -40 °C.

In combination with Royal Tech’s parabolic trough collectors, the fluid enables efficiency levels that are not possible with conventional heat transfer fluids.

At present, Royal Tech is building a 50 megawatt solar power plant in the city of Yumen in western China.

Heat exchangers and steam turbines then convert solar energy into electricity. In such systems, the level of efficiency primarily depends on keeping the heat transfer medium at the highest possible temperature and on effectively storing part of the heat obtained during the day so that the system can generate electricity after sunset and can operate around the clock.

Richard Yu, General Manager of Royal Tech, said : “Royal Tech has been devoted to R&D and the industrialisation of CSP technologies since 2009. Having established an open ended value chain from project development, technological R&D, component manufacturing to system integration as well as commissioning and maintenance, we cooperate with various partners to jointly promote the development of the industry and the application of new technologies."

China is making a concerted effort to replace fossil fuels, such as coal, with electricity from advanced solar thermal plants.

As the key medium in CSP systems, WACKER’s HELISOL silicone fluid features very high heat resistance and durability. In pilot tests conducted jointly with Royal Tech for over a year at its CSP test facility in Inner Mongolia, this transparent and odourless heat transfer fluid was heated to 425 °C.

Its freezing point of -55 °C is far lower than that of conventional heat transfer fluids. This significantly reduces the energy needed to uphold operating temperatures in winter. As a result, HELISOL is ideally suited to the harsh climates in the areas where China is conducting its major CSP projects. In addition, the fluid produces no benzene and generates much less hydrogen than conventional heat transfer fluids.

Auguste Willems, Executive Board Member at WACKER, said: “With our newly developed silicone fluid for solar power plants, we are strengthening our portfolio in the renewable energy field and, at the same time, are supporting initiatives to cut carbon dioxide emissions. Our partnership with Royal Tech will contribute to significantly enhancing the efficiency of solar power plants and, in turn, bolster the market position of our two companies in the highly promising market for high performance CSP systems.”