The inhibition of cholesteryl ester transfer protein may have an effect on increasing high density lipoprotein cholesterol (HDL-C) and benefit patients with atherosclerotic cardiovascular disease. However, the mechanism has been fraught with problems

The inhibition of cholesteryl ester transfer protein (CETP) may have an effect on increasing high density lipoprotein cholesterol (HDL-C), which could have a positive effect on patients with atherosclerotic cardiovascular disease. However, the mechanism has been fraught with problems, most notably the failure of Pfizer’s torcetrapib back in 2006 as a result of increased mortality in a Phase III trial.

Lilly has persisted with CETP inhibition, however, and its CETP inhibitor evacetrapib has been shown not to induce aldosterone or cortisol biosynthesis in animal studies, two pathways that were accelerated by torcetrapib.1 It also did not increase blood pressure, in contrast to the torcetrapib control. 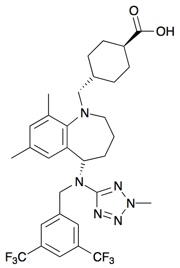 In a randomised Phase II trial, 398 patients with elevated low density lipoprotein cholesterol or low HDL-C levels were given 30, 100 or 500mg/day of evacetrapib, statin therapy of 40mg simvastatin, 20mg atorvastatin or 10mg rosuvastatin with or without evacetrapib, or placebo, after a dietary lead-in period.2 Evacetrapib as monotherapy gave dose-dependent increases of HDL-C of 54–129%, compared with a 3% decrease with placebo, and LDL-C reductions of 14–36%, compared with a 4% rise with placebo. When combined with statin therapy, it increased HDL-C by 78–88% and gave 11–14% decreases in LDL-C. No adverse effects were seen.

In another trial, the drug’s effects on a group of 165 patients with high LDL-C or low HDL-C were given 30, 100 or 500mg evacetrapib as monotherapy, 10mg atorvastatin, 100mg evacetrapib in conjunction with 10mg atorvastatin, or placebo.3 After 12 weeks of treatment, monotherapy increased HDL-C levels by 74, 115 and 136% respectively, and reduced LDL-C by 15, 23 and 22% versus placebo. The combination raised HDL-C by 103% and reduced LDL-C by 15% compared with atorvastatin alone. Evacetrapib also reduced CETP mass and activity. After a 4–6 week washout, levels returned to baseline.

The effects of food on evacetrapib exposure have also been assessed in a randomised, two period, two sequence, open label crossover study in 40 subjects. Patients were given either 130mg/day of evacetrapib following a 10-hour fast or after a high-fat breakfast each day.4 Changes in HDL-C, LDL-C and CETP activity were greater in the fed subjects than in those who had been fasting, indicating that there is indeed a food effect with evacetrapib.

In a recent update on an ongoing Phase III trial in about 12,000 people with high-risk athero-sclerotic cardiac disease, Lilly announced that the trial will be extended by about six months on the advice of the study’s academic executive committee. The aim is to give a greater insight into whether evacetrapib added to statins can reduce major adverse cardiovascular events compared with statins alone.