Cancer anorexia–cachexia syndrome causes a loss of weight and muscle mass in cancer patients, causing fatigue, weakness and a loss of appetite

Weight loss is often a real problem in cancer patients, resulting from cancer anorexia–cachexia syndrome. As well as a loss of weight and muscle mass, the wasting syndrome can often cause fatigue, weakness and a loss of appetite. This loss of predominantly lean body mass is particularly common in patients with advanced non-small cell lung cancer.

A drug that is being developed to address these issues is Helsinn’s anamorelin.1 It is a selective and orally active agonist of the ghrelin receptor. This endogenous peptide is secreted by the stomach, stimulating multiple pathways involved in the positive regulation of body weight, lean body mass, metabolism and appetite.

In a Phase I double blind, randomised, placebo-controlled trial, the short-term effects of the drug on several hormones in healthy patients was assessed.2 These included ghrelin, insulin-like growth factor 1 and binding protein 3, prolactin, ACTH, LH, FSH, TSH, cortisol, insulin and glucose levels. The group of 32 healthy volunteers were given escalating daily doses of 25, 50 and 75mg of anamorelin or placebo. It significantly raised ghrelin levels at all doses, and IGF-1 and IGFBP-2 also had sustained increases compared with placebo after five or six days of treatment. There were negligible effects on all the other hormones and fasting glucose, although some insulin resistance was observed at the highest dose. It was well tolerated, and changes in body weight directly correlated with changes in IGF-1 levels. 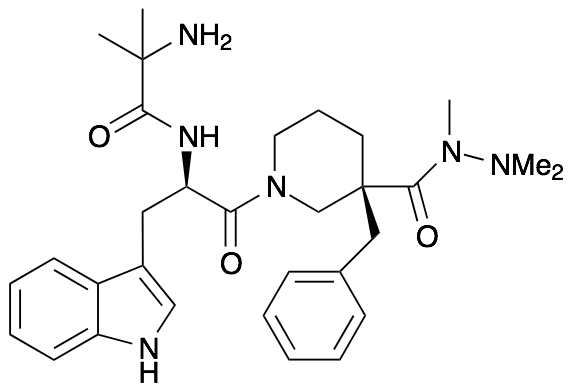 A double blind, placebo-controlled, crossover study has also been carried out in 16 patients with different cancers plus cachexia.3 The patients were randomised to 50mg daily doses of anamorelin or placebo for three days and then, after a 3–7 day washout period, the treatments were switched over. Anamorelin significantly increased body weight compared with placebo, with a 0.77kg gain compared with a 0.33kg loss with placebo. Patients reported they had significantly more appetite with anamorelin, and most adverse events were mild, including hyperglycaemia in two patients, nausea in one, and dizziness in another. None led to withdrawal from the trial.

Recently reported Phase III data were also positive. In two trials, patients with unresectable stage III or IV non-small cell lung cancer plus cachexia were given either 100mg anamorelin or placebo every day for 12 weeks.4 In the first trial in 484 patients, those given the drug had a median lean body mass increase of 1.1kg in 12 weeks, whereas the placebo group lost 0.44kg. Overall bodyweight increased by 2.2kg in the treatment group, and just 0.14kg with placebo. Again, appetite significantly improved in those given the drug. Similar benefits were seen in the second trial, in 495 participants with advanced NSCLC. Trials continue.